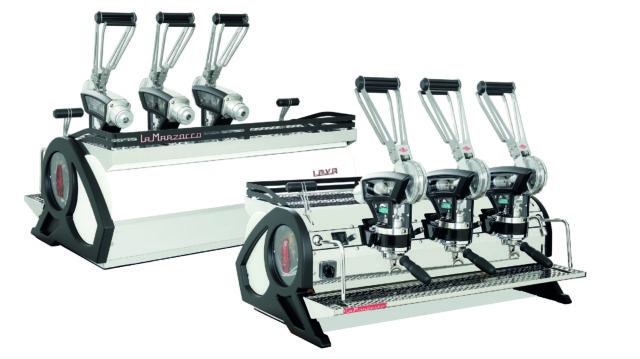 A square located just next to the HOST trade-show, the venue is considered to be one of Milan’s most prestigious contemporary “public and permanent works-of art” launched on occasion of the 2015 World Fair (EXPO 2015) and projected by the Accademia di Belle Arti di Brera (Fine Arts Accademy of Brera).

To celebrate its 90 years, La Marzocco redesigned the space to hold a one-night event with a fifties flair.

Leva X: Reimagining what a lever-actuated espresso machine can be

Leva is a cutting-edge café centerpiece that encourages engagement, barista experimentation and coffee conversations, while delivering the world’s best coffee extraction. Leva brings with it design, focusing not just on the physical beauty, but also on the satisfaction only found in a truly mechanical system.

The user can intervene in the pre-infusion pressure, shot volume and extraction pressure on each group.

Leva also greatly improves temperature stability of the traditional lever machine thanks to an innovative PID temperature control. Leva’s digital displays show real time extraction pressure on the coffee puck, the pre-infusion and extraction time as well as the pressure curve of the shot.

The Leva X is equipped with dedicated graphical displays for each group. The displays provide live visualization of pre-infusion pressure, extraction pressure, and time throughout the course of the shot.

After the coffee has been delivered, the extraction curve and parameters are visualized on the displays as a graph. The barista has the ability to overlay past visualizations, saving up to four graphs for each group, as guides for future extractions.

Enables you to fine-tune the tap water temperature for tea.

Allows you to use the machine with tall, to-go cups.

High performing steam wands that are cool to the touch.

Can be programmed to enter stand-by mode, improving energy efficiency.

Making it possible to update the firmware.

Here is why the coffee sector drives innovation and Italy is confirmed...