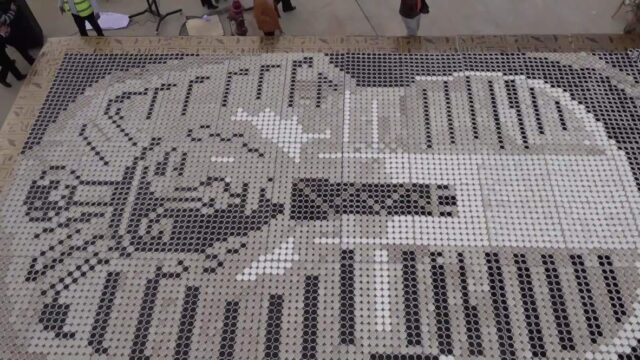 CAIRO, Egypt – King Tutankhamun made a comeback in Egypt in the form of a Guinness world record – the largest coffee cup mosaic of his death mask. The 7,260-paper-cup mosaic of ancient Egyptian King’s mask was arranged and celebrated at the yard of the soon-to-be-opened Grand Egyptian Museum (GEM) near the Pyramids of Giza, on the outskirts of Cairo.

Officials started setting up the paper cups at 1 AM on Saturday, sources reported, and a group of Egyptian youth joined in taking almost twelve hours to help create the 10×6 metre completed work.

The cups had each been filled with varying levels of milk to form the image, according to media reports.

Once the record was broken, the group drank the cups of coffee in celebration.

“On behalf of Guinness World Records, I am happy to be here to register a new world record for the largest coffee-cup mosaic at the GEM, a great cultural edifice that is expected next year to be jammed with tourists who would love to explore Egypt’s history and civilisation,” regional director of GWR for the MENA region Talal Omar said at the event.

The museum is expected to open in the latter half of 2020, exhibiting never-before-seen items found in King Tutankhamun ‘s tomb.

The previous record for the largest coffee cup mosaic was held by a group who put together 5,642 cups of coffee to resemble the late American singer Elvis Presley.