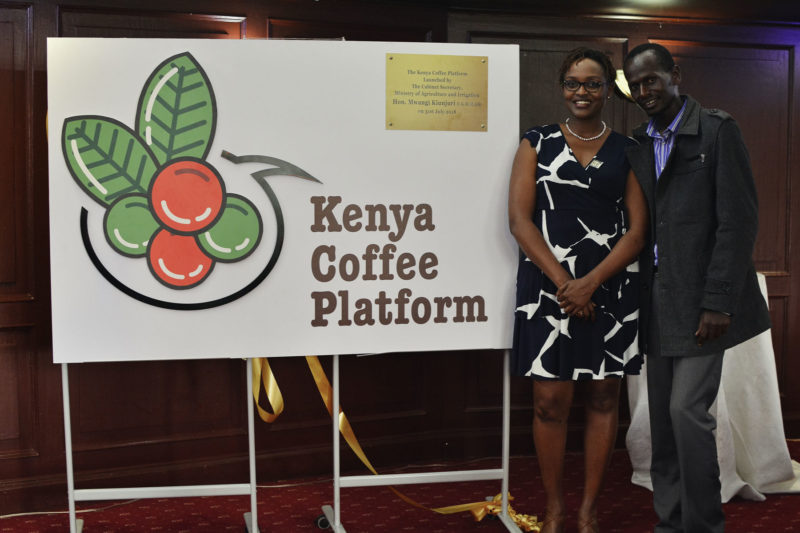 The Global Coffee Platform and Kenyan coffee stakeholders have taken a step closer to the sector’s sustainability by launching a Coffee Platform in Nairobi ‘Sauti ya Kahawa’. The event took place the 31st of July at the Nairobi Safari Club with the participation of more than 350 coffee stakeholders. The Cabinet Secretary Ministry of Agriculture and Irrigation, Hon. Mwangi Kiunjuri assisted to the event in representation of the Kenyan Government. The launch represents a milestone for the country and its 700.000+ coffee farmers, who will benefit by the current and future efforts towards achieving coffee sustainability in Kenya. Annette Pensel, the Executive Director of the Global Coffee Platform, highlighted the importance of the event: “The launch of this Platform will only lead to more collaboration and alignment. By supporting Sauti ya Kahawa we aim to mobilize the wide spectrum of Kenyan coffee actors to work collectively towards the common goal of a prosperous and sustainable sector, facilitated by robust public-private dialogue.” The Platform received the support and guidance of several stakeholders, including farmers and the Union and the Association representing them, the Ministry of Agriculture and Irrigation, the Council of Governors, the State Department of Cooperatives, coffee traders, marketers and non-government organizations who form part of the steering committee. Additional, several international private and public organizations played a big role in the Platform creation: the sector partnership support by the Dutch Ministry of Foreign Affairs through Rainforest Alliance UTZ program, as well as the grant concede by the German Federal Ministry for Economic Cooperation and Development (BMZ). GCP Coffee Platforms are inclusive country and national multi-stakeholder forums encouraging pre-competitive collaborative initiatives and engaging both public and private stakeholders to freely interact, discuss, deliberate and address issues affecting the sector. Therefore, Sauti ya Kahawa will represent the voices of coffee stakeholders in addressing sustainability challenges such as low production, limited access to inputs, credit and extension services, climate change, low youth, and women involvement, among others.

Kenya, in need of collective action

Coffee production in Kenya has declined in recent years, due to a multitude of complex factors. To address these issues, the Africa Fine Coffee Association (AFCA), UTZ and Solidaridad East and Central Africa held consultations and support the forming of the collaborative platform. The Global Coffee Platform, AFA Coffee Directorate and Commodities Fund were also incorporated into the technical committee and proposed the composition of an all-inclusive steering committee with the mandate of overseeing the implementation of the platform work plan. In 2017, during the Global Coffee Sustainability Conference in Geneva, the Global Coffee Platform and the Deutsche Gesellschaft für Internationale Zusammenarbeit (giz) signed an agreement to support the developing of the Coffee Platform, setting a precedent of international collaboration for the sake of Kenyan farmers. The €400,000 grant conceded by the BMZ, through the giz, accelerated the process of the Platform constitution.

About Sauti ya Kahawa

‘Sauti ya Kahawa’ – ‘Sound of Coffee’ in Swahili – is the name chosen for the Platform seeking to increase sustainable productivity by bringing together all the major links of the coffee supply chain to discuss and implement initiatives effectively. The Kenya Coffee platform was formed in 2017 as a result of a coffee stakeholders meeting during the World Coffee Conference in Addis Ababa in 2016, where Kenyan stakeholders talked about the need to work together to tackle issues affecting Kenyan coffee. The Kenya Coffee Platform is modeled along similar successful ones in Brazil, Colombia, Indonesia, Uganda, Vietnam, and Tanzania. The Platform is therefore envisaged to serve as an inclusive, participatory forum that will facilitate the alignment of efforts so that they are all targeted at reaching the country’s goal of increasing productivity and quality to achieve ultimately enjoyable livelihoods for the coffee farmer. As the slogan reads Quality Coffee, Good livelihood “kahawa bora Maisha poa”. Receiving more than 20% of Kenyan coffee exports, Germany is the largest export destination for Kenyan coffee, followed by the United States (17%), Belgium (10%) and Sweden (8%) The potential effect on poverty reduction is particularly high given the predominance of smallholder farmers in coffee production and a high potential for on-farm yield and income increases. Coffee production has drastically reduced by more than 50% in the last two decades. Kenyan export earnings from coffee have declined from US$500 million in the 1990s to less than US$ 150 million in 2015.
SourceThe Global Coffee Platform
Share
Facebook
Twitter
Pinterest
WhatsApp
Previous articleKenyan government committed to revive the coffee industry, boost production
Next articleSalon du Chocolat in Paris to feature The Chocolate Fashion Show