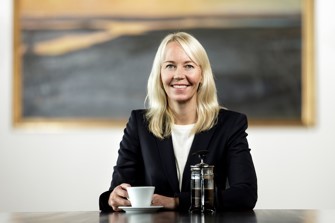 On 16 June will Kathrine Löfberg (in the picture), chairman of the coffee roaster Löfbergs and a fourth-generation Löfberg, be awarded with H.M. The King’s Medal for exceptional contributions within Swedish industry.

H.M. The King’s Medal was instituted around 1814, and is awarded in a number of different sizes. It is presented to Swedish and foreign citizens for exceptional contributions.

H.M. The King’s Medal is presented to leaders in Swedish industry that run companies in a profitable and sustainable way, which Kathrine Löfberg as chairman of the 110-year-old family company is a great example of.

-It is fantastic and very honorable to be the recipient of this medal. That our way of running a company is noticed like this is a testimony to me that what we do within Löfbergs makes a positive contribution to society, which is exactly what we aim for, says Kathrine Löfberg.

Other prominent leaders of Swedish family businesses that have been presented with the King’s Medal for their contributions within Swedish industry are Antonia Ax:son Johnson, Ingvar Kamprad, Cristina Stenbeck and several members of the Wallenberg family.

illycaffè announce partnership with TerraCycle to collect and recycle ...

Tim Hortons to give away over $8m in free coffee and hot beverages sta...