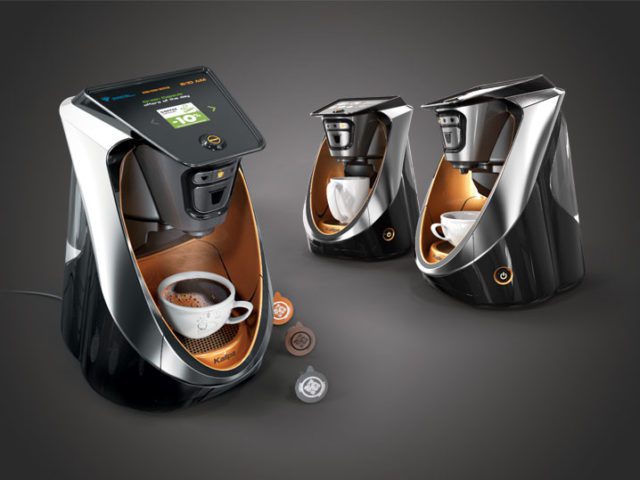 Ever since the Keurig coffee system made its widespread launch in the mid-2000s, single-cup, pod-style coffeemakers have enjoyed a meteoric rise in popularity. Despite these machines’ versatility, however, devices like Keurig’s K-Cup brewing system or Nespresso’s VertuoLine gave owners little in the way of flexible control over their brew.

Enter the Kallpa Coffe Machine concept and its particularly novel approach to the pod-style industry. Similar to Keurig or Nespresso’s rigs in the sense that it brews coffee from capsules, Kallpa boasts the additional ability to scan QR codes to give owners even more information and control over their java.

Each individual capsule or pod features its own quick response (QR) code, and the Kallpa machine quickly scans and reads these immediately upon their injection into the device.

Coupled with the machine’s built-in Wi-Fi connectivity, the Kallpa then displays a range of relevant data such as a coffee’s particular nutritional information, recommended capsule combinations, and how to properly prepare each cup.

Once an owner is done ingesting the information, a simple press of a “Start” button begins the brewing process while granting the user continued access to the QR data.

Aesthetically, the Kallpa Coffee Machine doesn’t look all that different than Keurig’s iconic brewer, featuring a front-loading pod holder, interactive touchscreen on top, and an area where an espresso or coffee cup would sit.

Adorned in glossy black and silver, the device’s interior is finished with a visually-pleasing burnt orange.

As touched on above, despite the machine’s revolutionary innovation, it is merely a concept at this point.

A Red Dot Award winner this past year, a Peruvian designer by the name of Ernesto Rosales is the mind behind this brilliant new take on brewing coffee. It’s not entirely known when (if at all) the Kallpa Coffee Machine might see the light of day.