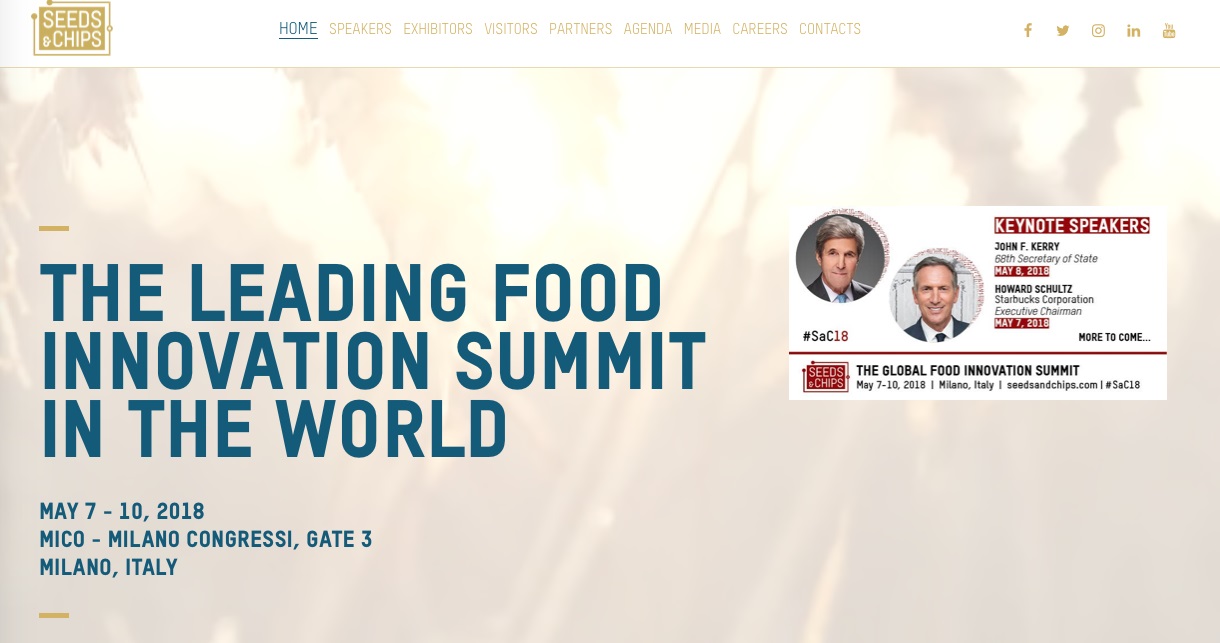 MILAN, Italy — Former Secretary of State John Kerry and Starbucks Executive Chairman Howard Schultz have been announced as two of the Keynote speakers to appear at Seeds&Chips – The Global Food Innovation Summit, the largest food tech event in the world.

The fourth edition of the Summit, the brainchild of Seeds&Chips founder Marco Gualtieri, will take place at MiCo, Milano Congressi, from 7 to 10 May 2018.

Howard Schultz, Executive Chairman of the largest coffee chain in the world, will open the Summit on May 7th. Milan holds a special place in Mr. Schultz’s career path, as it was on a visit to the city that he understood that coffee was more than a beverage, it was an experience.

Schultz was convinced that the Italian experience of coffee beverages like lattes and cappuccinos, and the community that develops around this shared passion, was a valuable formula ripe for international export.

He departed from Starbucks and took his enthusiasm for coffee cultures to Il Giornale, a coffee bar chain that grew into a very successful brand.

It was so successful in fact, that Il Giornale purchased Starbucks in 1987, and Schultz became President and CEO of the company that first inspired him. Today, Starbucks is one of the world’s most successful companies, valued at $77 billion, with more than 21,000 stores around the world.

Former Secretary of State John Kerry drawing on his vast experience in International Affairs Kerry will address the Summit on May 8th, where he will discuss the importance of climate change to the food system and the challenges that we face in securing a sustainable future.

Exploring solutions to environmental challenges has been a central theme in Kerry’s political career as well as his subsequent humanitarian work. John Kerry’s appearance on the Seeds&Chips stage follows the 2017 keynote address by President Barack Obama, who chose The Global Food Innovation Summit to deliver his first post-presidency remarks.

The Global Food Innovation Summit represents an important opportunity for Secretary Kerry’s message to reach an important sector of the tech world, as food becomes an increasingly important aspect of sustainability.

Marco Gualtieri, Founder, and Chairman of Seeds&Chips, said this about the 2018 Summit: “This year’s edition of Seeds&Chips has four incredible international figures taking the stage on each of its four days. We are honored to officially announce the first two, Howard Schultz and John Kerry, who set the standard for the quality of Keynote speakers at the Summit. Last year President Obama, with his extraordinary charisma, paved the way towards uniting the goals sustainability with food, the environment, and the climate in a debate which raised the level of international discourse. Seeds&Chips is committed to continuing along this path with the knowledge that our message and the new models, innovations, and opportunities related to food must reach every corner of the planet”

Exploring solutions to environmental challenges has been a central theme in Kerry’s political career. In 2009, he was appointed as the Chairman of the Senate Foreign Relations Committee where he assumed a key leadership role on foreign policy and national security issues facing the United States. Upon his appointment as Secretary of State under President Barack Obama in 2013, the United States made climate change and sustainability a central feature of their foreign policy portfolio. Kerry spearheaded the bilateral talks between the US and China in 2014 which resulted in a cooperation agreement between two of the most powerful nations in the world. Most notably, Kerry was instrumental in securing US participation in the 2015 Paris Agreement, a sweeping international accord to reduce carbon emissions that were signed by almost 200 countries around the world. In his work since leaving office, John Kerry has been a tireless advocate for environmental awareness and has founded a number of initiatives aimed at tackling the challenge of climate change. Kerry’s ‘Our Oceans’ Foundation has generated commitments valued at $9.24 billion and committed to protecting 9.9 million square kilometers of the world’s oceans.

Growing up in a working-class family in Canarsie, Brooklyn, Mr. Schultz experienced first hand the struggles that American families face in order to make ends meet. Coffee figured early in his career: upon graduating with a Bachelors of Science degree, Schultz worked for Hammarplast selling European coffee machines in the United States. His position led to his first encounter with The Starbucks Coffee Tea and Spice Company, a small operation founded in 1971 that sold high-quality beans to retail outlets. In 1982 he was hired as the Director of Retail Operations and Marketing for the young company, and in 1987 he became CEO of the company. Under Schultz’s stewardship, Starbucks has been an early proponent of corporate social responsibility, and its 2016 Global Social Impact Report outlined the company’s vision for the future with a particular emphasis on sustainability, greener retail, and community engagements. In May 2016, Starbucks issued a $495.6 million sustainability bond to use its influence in the coffee supply chain to improve working conditions for farmers and combat the environmental risks to coffee farms around the world.

Seeds&Chips, The Global Food Innovation Summit, founded by entrepreneur Marco Gualtieri, is the largest Food Innovation event in the world. The Summit is a showcase entirely dedicated to promoting innovative food solutions and talent from around the world, with an exhibition hall for innovators to present their work. Together, actors from all points in the global food chain discuss the themes and projects that are changing the way in which food is produced, transformed, distributed, consumed, and recycled. At the 3rd edition of the Global Food Innovation Summit, President Barack Obama made his first post-presidency appearance as a Keynote speaker, taking his place among 300 speakers and 240 exhibitors from around the world. In four days, the Summit recorded 15,800 visitors and 131 million social media impressions. The fourth edition of The Seeds&Chips Global Food Innovation Summit takes place at MiCo, Milano Congressi, from May 7-10, 2018. Among the speakers scheduled to appear are Former US Secretary of State John Kerry and Howard Schultz, Executive Chairman of Starbucks.

Share
Facebook
Twitter
WhatsApp
Linkedin
Previous article
World coffee exports were down 0.6% during the first half of CY 2017/18
Next article
The first Milan Coffee Festival promises to be an illuminating coffee experience