Japanese ambassador praises the quality of the Jamaican coffee industry 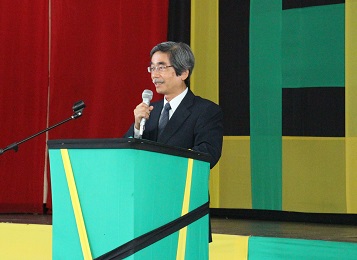 KINGSTON, Jamaica – A statement by the ambassador of Japan to Jamaica praised the quality of Jamaican coffee and wished success to the Coffee Industry Board after devastating bush fires in 2015.

The ambassador stated that he expected coffee trade between the two countries to grow, as the popularity of high-quality “third wave coffee”‘ in Japan was likely to mean that demand for Jamaican Blue Mountain coffee was likely to increase.

Masanori Nakano (PICTURE) said that “The Blue Mountain coffee from Jamaica has special significance and status for Japanese,” and that “Blue Mountain coffee is one of the highest quality and sought-after coffee in the world, and often called “King of Coffee” in Japan.”

He compared the coffee to fine wine and described how a famous Japanese sommelier said that Blue Mountain coffee had a “good balance of flavor accentuated with a fresh acidic taste.” Not unlike wine, the flavor of the coffee beans is highly influenced by the soil and climatic conditions in which it grows.

The ambassador went on to describe the differences between the second and third wave of coffee, mentioning how the “first wave” occurred in the 1960s with the first mass-produced coffee, the second wave arrived in the 1980s with chains like Starbucks, which first served espresso with milk, and “third wave” which is a more recent development focuses on high-quality coffee.

The price of second wave coffee can vary around the world. A study conducted by Couponbox showed that a Starbucks cappuccino costs almost twice as much in Switzerland than it does in the UK: the popular drink will set you back $6.06 in Bern and $3.24 in London. However, the price difference between different types of third wave coffee is even greater.

Jamaican Blue Mountain coffee is one of the most expensive coffees in the world. Its high price tag comes from the fact that it is grown in excellent conditions on the Blue Mountain range of Jamaica which has a cool, misty climate with high rainfall and rich soil with excellent drainage.

Official Blue Mountain coffee is only grown in the parishes of St Andrew, St Thomas, Portland, and St Mary at altitudes between 910 metres and 1,700 metres.

In the past there have been issues with counterfeit Jamaican Blue Mountain coffee where growers had attempted to pass coffee grown in other regions for the real thing to attract a higher price tag.

However, the Jamaican Coffee Industry Regulation Act sought to stop this problem by regulating the coffee produced in Jamaica, meaning that Blue Mountain coffee must be officially recognised as such before being sold for export.

As of 2010, the coffee industry in Jamaica was the highest agricultural earner in the country behind sugar.