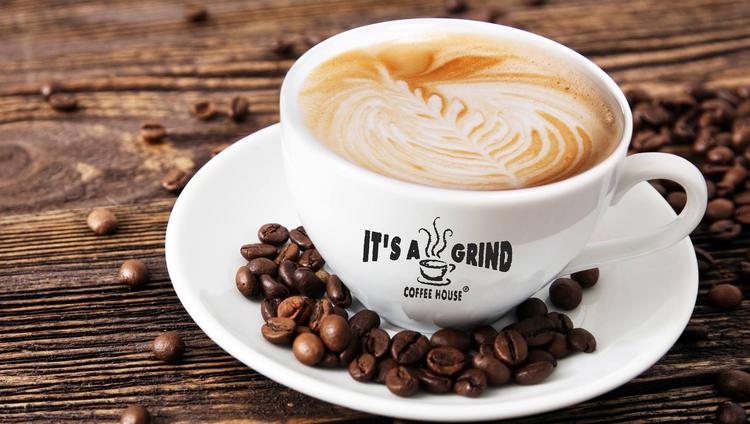 SANTA FE SPRINGS, CA, U.S. — Since 1994 It’s A Grind Coffee House has been a neighborhood destination for high quality signature coffee served in a comfortable, relaxed atmosphere; and this summer the brand is giving mad props to the ‘90s in honor of its 25th year in business. It’s A Grind is paying tribute to its founding decade and everything that made the ‘90s glorious, from the slang and music to the fashion and fads, with themed drinks and all-out ‘90s throwback pricing.

Created as a nod to the decade’s fashion where tie-dye made a big comeback, the NEW Tie-Dyed Electric Blue Lemonade joins It’s A Grind’s summer menu for a limited time.

The brand is also highlighting its most popular beverages of the ‘90s including the White Chocolate Mocha Iced Blended, White Mocha Over Ice and White Chocolate Mocha (hot) that were often enjoyed at It’s A Grind Coffee Houses while guests attended open mic nights featuring poetry readings, live art and acoustic performances.

To commemorate It’s A Grind’s founding year, the brand is offering 94¢ throwback pricing on small (12 oz.) drip coffees throughout the summer at participating stores on select days.

Founded in 1994 by Marty Cox and Louise Montgomery in Long Beach, California, It’s A Grind was built to be reminiscent of a lived-in home, with the goal that everyone who visited for a freshly brewed coffee felt comfortable enough to stay a while.

In 2014, It’s A Grind was acquired by Retail Food Group – USA and has since opened several new locations, currently with 20 units in operation, and further expansion on the horizon.

“We are proud to celebrate the fact that we’ve been rockin’ the local pour since ‘94 and, since the ‘90s is arguably one of the best decades for pop culture, we thought it would be a great anniversary theme to have some fun with our guests!” said Sam Ferreira, President of It’s A Grind Coffee House.

“Our anniversary is a chance to remind our fans what It’s A Grind Coffee House is all about and why creating a comforting environment to enjoy a gourmet cup of coffee is such a big part of our DNA.”