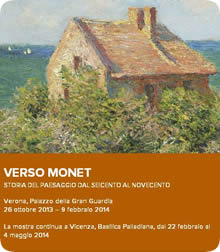 Dutch Bros is back with new nostalgic drinks

VERONA – A large numbers of journalists took part on October 23rd’s vernissage of the exhibition “Around Monet. The landscape from the seventeenth to the twentieth century” held in Verona at the Palazzo della Gran Guardia. Segafredo is Special sponsor of the exhibition.

The following day was the day of bloggers who have come from all over Italy on Segafredo Zanetti’s invitation.

During the event, organized by Segafredo exclusively for bloggers, Marco Goldin introduced the exhibition with a guided tour to the 105 masterpieces coming from museums all around the world.

Paintings and drawings arrived at the Verona exhibition from private collections and important museums such as the Van Gogh Museum in Amsterdam, the National Gallery in Washington, the Philadelphia Museum of Art, the National Museum of Wales in Cardiff, and many others.

You can see the photos of the day and read the comments on various social by searching the hashtag #artandcoffee.

The exhibition was opened to the public on Saturday and it will last through 9 February 2014.

A record attendance is expected.

The exhibition will follow in Vicenza, Basilica Palladiana, from 22 February to 4 May 2014

The landscape from the seventeenth to the twentieth century
Verona, Palazzo della Gran Guardia
26 October 2013 – 9 February 2014