MILAN, Italy – The Board of Directors of Italmobiliare S.p.A. today approved the quarterly financial results for the nine months ending on September 30, 2019. During the first nine months, also thanks to a positive performance in the third quarter, all the portfolio companies reported an improvement in Ebitda compared to the same period of the previous year.

Performance was particularly positive – exceeding forecasts – at Caffè Borbone and Tecnica Group, which both raised their own Ebitda by around 45%. At the same time, Ebitda growth between 15% and 20% was reported by the other portfolio companies, with the sole exception of Sirap, which nevertheless achieved moderate progress.

Overall, on the basis of the aggregated performances of the single companies for the first nine months, the Portfolio Companies boosted revenue by 5% to 1.1 billion euro and Ebitda by over 27% to approximately 130 million euro.

The main contribution in the first nine months came from divestiture of HeidelbergCement and Mediobanca shares (+167 million euro), the disposal of the shareholding in Jaggaer (+91.2 million euro), and the acquisition of Autogas Nord S.p.A. (-60.1 million euro), where, in accordance with the adjustments envisaged by the investment agreement, the equity interest was recently increased from 27% to 30%. During the third quarter, Italmobiliare also disinvested its interest in the Aksìa IV fund for 21.6 million euro, generating a money-on-money return over 2x in the investment period started with the commitment in 2015.

On September 24, Italmobiliare shares were included in the Borsa Italiana STAR segment. The share price rose by 15.5% over the first nine months of the year, and its current performance reflects an improvement of 30%. Based on current stock market prices, the NAV discount decreased significantly to approximately 36%, from 46.3% at the end of 2018.

Significant events in the quarter

During the third quarter, Italmobiliare completed the sale to Cinven of its 9.5% shareholding in Jaggaer, a company active in e-procurement and spend management software platforms, for an amount of 91.2 million euro. At the end of 2017, Italmobiliare sold its equity investment in BravoSolution to Jaggaer; as part of the agreement, it invested approximately 35 million euro in the US company, acquiring a shareholding of approximately 9.5%.

Italmobiliare also completed the sale on the secondary market of its share in the Aksìa IV fund for an amount of 21.6 million euro, generating a money-on-money return of about 2.2x on its investment commitment in 2015.

In the quarter, Italmobiliare applied for and was granted admission to the STAR segment of Borsa Italiana S.p.A.; trading began on September 24, 2019.

Compared with December 31, 2018, the main changes in the composition and value of NAV arose chiefly from:

Global economic conditions reflect a synchronized slowdown in the various geographical regions concentrated in the manufacturing sector, while the overall situation in the tertiary sector remains steady. The climate of political uncertainty (trade war, Brexit, Middle East) is having repercussions for business confidence and investment spending, while the direct effects of tariffs on GDP (USA) are neutralized in part in the short term by the effects of the substitution of imported goods with domestic goods. Some signs of stabilization in forward-looking macro-indicators in concomitance with an easing in the tone of the US-China trade negotiations and a possible non-traumatic solution to Brexit increase the probability of a slow upturn in the economic cycle in the first half of 2020, although uncertainties remain.

Given the weakening economic cycle, the global inflation rate has decelerated. In the advanced nations in particular, the central banks continue to pursue non-conventional monetary policies: however, their effectiveness is beginning to be questioned and their possible adverse effects with regard to financial and economic stability are being analyzed. Looking forward, the chances of greater support for the cycle depend on greater impetus from fiscal policies, especially in the Eurozone (Germany). In Italy, the 2019 GDP growth forecast is practically zero, while expectations for 2020 are around half of one percentage point, below the consensus forecast for the Eurozone (1.4%). 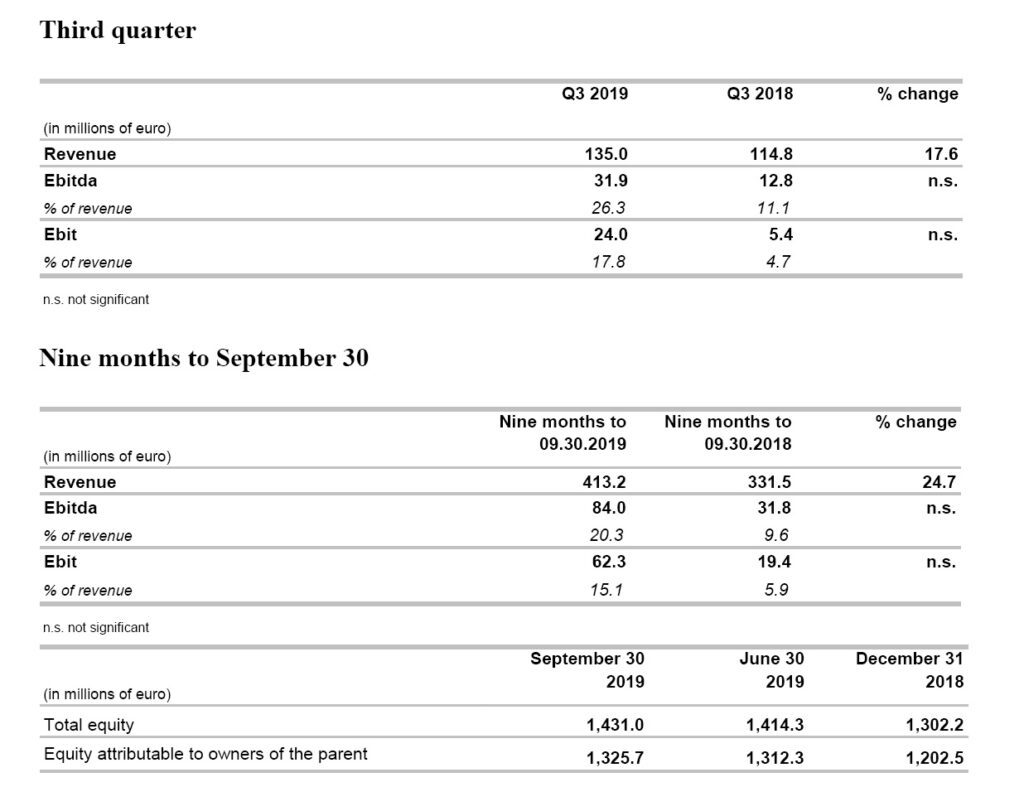 Italmobiliare Group consolidated revenue in the first nine months of 2019 increased by 81.7 million euro (+24.7% on the year-earlier period). A significant factor in the revenue improvement was the rise in turnover at Caffè Borbone (+74.3 million euro, in part as a result of the different consolidation period, given that the company was acquired in May 2018).

The increase arose largely as a result of the change in the fair value reserve on assets classified at fair value through other comprehensive income (FVOCI), relating specifically to HeidelbergCement, Mediobanca and Jaggaer shares (+119.8 million euro).

The main indicators reflecting the operating performance of the Group companies were generally positive or stable, with some exceptions as detailed in the following sections.

Revenue for the first nine months amounted to 58.7 million euro, an increase of 14.1 million euro from the year-earlier period (44.6 million euro), and arose mainly from:

In the first nine months of 2019, the net financial position of Italmobiliare S.p.A. rose by 195.7 million euro, from 344.9 million euro at December 31, 2018 to 540.6 million euro at September 30, 2019, allocated for approximately 50% in the Vontobel Fund with a conservative risk profile consistent with the company’s investment policies.

In terms of distribution channels, sales through the retail channel and on the web continued to grow, at rates substantially in line with average rates; sales in the mass merchandising channel showed a very strong increase of 82% from 2018 on a monodose coffee market that recorded growth of 7.7% over the same period (Nielsen data). In terms of products, capsules showed overall growth of 36%, driven by the excellent performance of the Nespresso and Lavazza A Modo Mio compatible capsules.

The net financial position at September 30, 2019 reflected debt of 45.5 million euro, an improvement of 5.7 million euro from December 31, 2018 after the dividend payout in the second quarter (8.0 million euro); the first nine months generated a positive cash flow of 13.7 million euro, lower than the year-earlier period as a result of the rise in working capital (+15 million euro from the end of 2018) due to higher turnover, seasonality, the change in the channel mix and the increase in stocks of coffee beans.