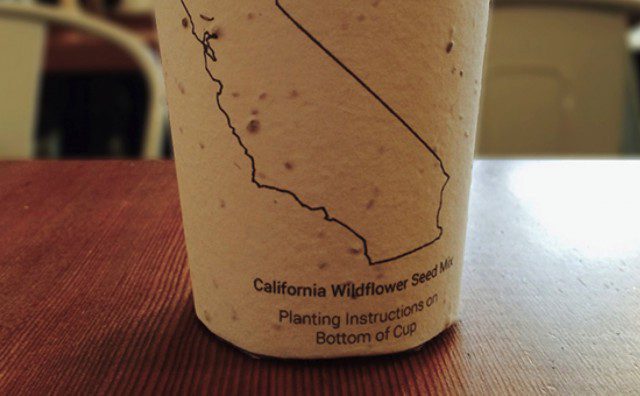 California company “Reduce. Reuse. Grow” has launched biodegradable coffee cups that contain seeds within their structure. So, what does this mean for you and the planet? Essentially, when you’re done with a delicious cup of java, feel free to plant the empty cup in a suitable area, where it’ll eventually grow into a tree.

You get to enjoy your coffee, while doing your part to help preserve the planet.

It’s explained that the concept aims to educate consumers about their consumption waste habits, while also working to remedy the problem – and what a better way than to begin with a habit that most Americans start their day with: that must-have cup of coffee?

According to the company’s video on the topic, “each day, Americans consume 400 million cups of coffee, adding up to over 146 billion cups annually.”

The video goes on to say that while many folks think that recycling their coffee cups is a good idea, the reality is that the cups often end up in landfills anyway after a few recycling efforts. Hence, the company’s obvious omission of the word, “recycle” from their name, and a change to one that more accurately outlines their mission.(1)

A better planet in 180 days

The ingenious cup, which has seeds embedded in its walls, is said to biodegrade within 180 days. After that point, it ultimately produces a range of beautiful flowers or native tree species. It’s explained in the company’s video that a person simply purchases a cup of coffee, and when it’s empty, takes it to a desired location to plant it in an effort to, “… further enhance local landscapes, urban spaces or community gardens.”

In the event that an individual opts not to do this themselves, there will be special bins at the coffee shops, who will return the cups to “Reduce. Reuse. Grow,” where the cups will be redistributed and planted appropriately.(1)

It’s a great effort that reinforces the health-conscious wave that’s sweeping the nation. From consumers demanding more on the food-labeling front and restaurant chains that are more aware of the ingredients in foods, to these revolutionary coffee cups, the growing interest in health – of people and the planet – is evident.

Say no to plastic pods, yes to environmentally-responsible coffee habits

This idea also comes at a time when other aspects of the coffee industry have been facing a great deal of scrutiny on the environmental front.

For example, Keurig’s popular K-Cups have drawn a great deal of concern, because although they’re convenient, they’re non-biodegradable and non-recyclable. Even the creator of the K-Cup, John Sylvan, has indicated regrets about them, saying that,

“No matter what they say about recycling, those things will never be recyclable. The plastic is a specialized plastic made of four different layers.” As such, Keurig has plans to create a recyclable pod by 2020.(2)

So concerned are people about the ill effects of K-Cups, that some areas are outright banning their use.

In Germany, spokesperson for the Hamburg Department of the Environment and Energy, Jan Dube, expressed how difficult it is to recycle them.

Dube says that they, “can’t be recycled easily because they are often made of a mixture of plastic and aluminium.” To address this issue, visitors and employees at state-run buildings in Hamburg won’t be allowed to use single-use coffee pods.

Such offices are actually not allowed to purchase them, as well as other items that contain “certain polluting products or product components.” As such, the likes of plastic utensils and bottled water are also off-limits.(2)

As citizens become more aware of the collapse of our planet’s health, from the waning bee population, to deforestation, and everything in between, it’s refreshing to see changes taking place that strive to preserve its resources and beauty.

Sources for this article include: