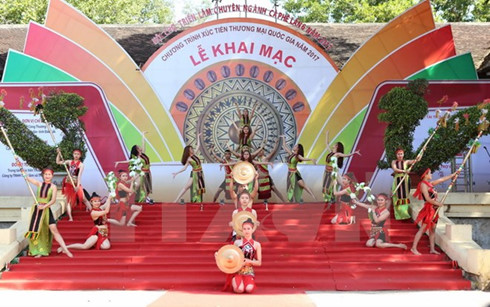 BUON MA THUOT, Vietnam – An international coffee fair themed “Quality Coffee for the Health of the Community” opened yesterday in the Central Highlands province of Dak Lak. This year’s fair has attracted the participation of 234 businesses with 735 booths displaying mostly coffee and coffee-related products.

Twelve of the exhibitors are foreign businesses who are displaying products in 58 booths. Many specialties from different regions in the country with clear origins are also presented.

Also on display are auxiliary products, machinery and equipment for production and processing of coffee as well as an array of consumer goods produced in the Central Highlands region.

Organisers said the fair was an opportunity for businesses, State agencies, scientists and farmers to meet, exchange, and promote trade, investment and transfer technologies.

They also said that the fair, which was of a larger scale compared to previous coffee festivals, would create conditions for manufacturers to promote their business, advertise coffee brands; and attract domestic and foreign tourists to learn about and enjoy coffee products from the Central Highlands region.

At the fair, local and foreign tourists will also enjoy cultural and art performances by ethnic minority communities in the Central Highlands region.

Bui Huy Son, head of the Trade Promotion Department of the Ministry of Industry and Trade, said the ministry was working closely with Dak Lak Province, the Coffee and Cacao Association and businesses to support development of the Vietnamese coffee industry.

Coffee is among Viet Nam’s major products on the world market, he said.

Viet Nam has exported 1.2-1.5 million tonnes of coffee each year during the last decade. It ranks second in the world for coffee exports, following Brazil.

Coffee is grown widely in many areas in Dak Lak Province, and its capital, Buon Ma Thuot is renowned for producing coffee of high quality and distinct taste.

The fair is part of the Coffee Festival 2017, organised by the Southwestern Region Steering Committee and Dak Lak Province’s People’s Committee, which will open tonight in Buon Ma Thuot City.