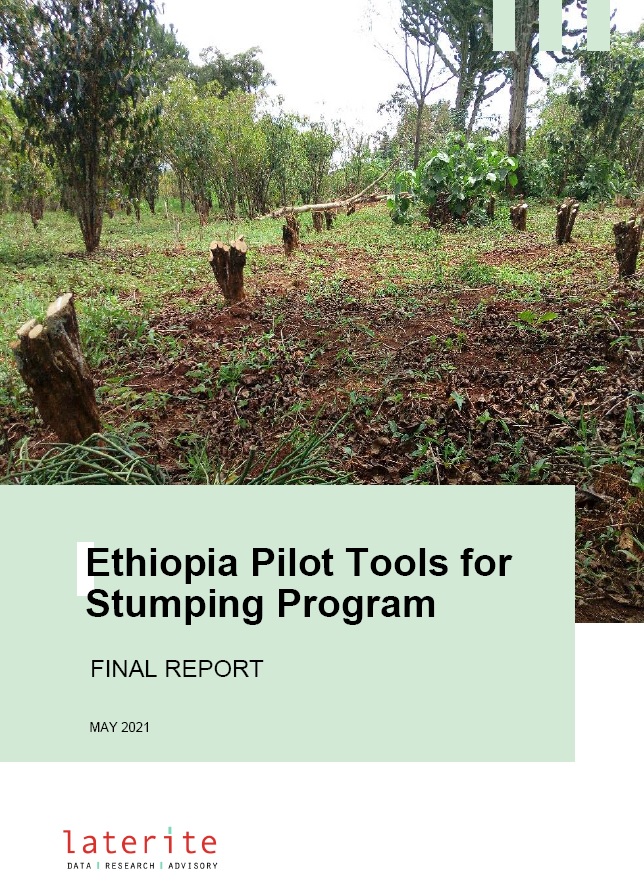 ARLINGTON, VA — Ethiopian farmers who were offered tools as an incentive to stump their coffee trees were more likely to adopt the practice and stumped more trees on average than a control group, according to a new study from research firm Laterite that evaluated the impact of a pilot run by international nonprofit TechnoServe. The study, which was funded by the Max und Ingeburg Herz Stiftung through HereWeGrow, suggests that such incentives could be a cost-effective way to significantly increase yields on Ethiopian coffee farms. Ethiopia is one of the world’s leading coffee origins, but farm yields are relatively low.

and just one-third of what farmers in Colombia produce. One reason for low productivity is the aging stock of coffee trees in the country, as the plants tend to produce less coffee over time.

Stumping, in which an old single-stem coffee tree is rejuvenated by cutting its stem down to the stump, is an effective way to increase the production of aging trees. TechnoServe studies have shown that once a stumped tree has grown back, its annual yields are typically three times higher than they had been prior to stumping. But in Ethiopia, farmers are often reluctant to rejuvenate their trees in this way: because the tree yields no coffee during the first year it grows back and a limited amount during the second harvest, farmers fear the initial loss of income.

To address that reluctance, TechnoServe and Laterite carried out a study to see if offering coffee growers basic farm tools in exchange for stumping their coffee trees made them more likely to adopt the practice. In two communities in Ethiopia’s Sidama region, TechnoServe provided farmers with training on the benefits of stumping and how to carry out the practice, and then offered them sets of tools–ranging from pruning shears, bean seeds, and a saw for those stumping at least 50 trees and increasing to a wheelbarrow for those stumping more than 150 trees–to be awarded after verification that they had carried out the practice. Two neighboring communities were selected to serve as a control and were only provided training.

The study also demonstrates that offering tools as an incentive can be highly cost-effective. The average cost of the incentives ranged from $0.33 to $0.49 per tree, depending on the package. Meanwhile, a stumped coffee tree can be expected to earn a farmer approximately $1 of additional income during each annual harvest. An earlier pilot found that providing cash incentives of $0.70 per tree resulted in a similar rate of stumping.

“Stumping is one of the most important practices for increasing productivity and improving the livelihoods of Ethiopia’s coffee farmers,” said Paul Stewart, global coffee director for TechnoServe. “What this study makes clear is that relatively low-cost incentives like farm tools can dramatically increase the adoption of stumping. There’s a real opportunity for stakeholders around the world to scale up this approach, increasing Ethiopia’s coffee supply and–most importantly–helping Ethiopian farmers to lift their families out of poverty.”

The full study can be found at: https://www.technoserve.org/wp-content/uploads/2021/05/Ethiopia-Pilot-Tools-for-Stumping-Program-Final-Report.pdf

TechnoServe is a leader in harnessing the power of the private sector to help people lift themselves out of poverty. A non-profit organization operating in 29 countries, we work with hard-working men and women in the developing world to build competitive farms, businesses, and industries. By linking people to information, capital, and markets, we have helped millions to create lasting prosperity for their families and communities.

Founded over 50 years ago, TechnoServe has been named the #1 nonprofit for fighting poverty by an independent charity ratings agency.