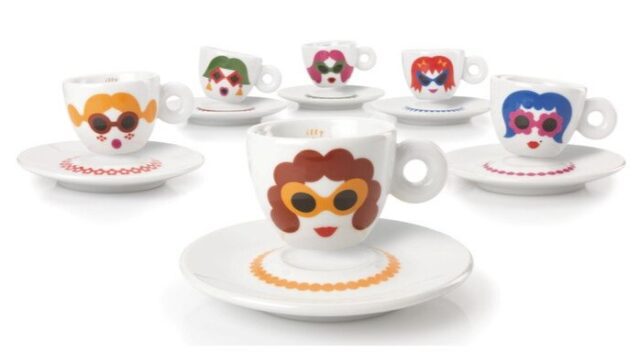 TRIESTE, Italy– illycaffè presents the new illy Art Collection designed by Olimpia Zagnoli, globally recognized Italian illustrator known for her colorful, minimalist graphic art with retro gusto; an homage both to Futurism and to the Beatles.

The encounter between the iconic illy cups, designed by Matteo Thun in 1991, and the flair of Olimpia Zagnoli lends a touch of originality to an exciting new series dedicated to women, to their uniqueness and ability to generate collaboration and a sense of togetherness.

The 6 new cups portray the Sisters, eclectic female personas of different and potentially opposite characters, who meet in a bar and share a laugh over an espresso and a pastry, each an expression of a distinctive, original point of view.

Strong identities projected in six colors: yellow, pink, blue, green, red and brown, the whimsy of their glasses distinguishes rather than hides; their necklaces lining the underlying plate become interchangeable accessories just as is common practice among good friends.

The cups define a social status in life; lively “fem-oji” with a touch of positive flair that Olimpia adds in a nursery rhyme accompanying each set.

“The collaboration with Olimpia Zagnoli for this new illy Art Collection – explains Massimiliano Pogliani, CEO of illycaffè – is rooted in the art of sharing. The ritual of coffee is a tradition, a consolidated attitude and moment that symbolizes the excellence of sharing and socializing; one that is never lacking, particularly among “Sisters”, as defined by the artist’s feminine figures.”

The Olimpia Zagnoli collection is available starting in May in various formats:

The illy Art Collection began in 1992, an idea of Francesco Illy: as of today, they have been personalized, hand-numbered and signed by over 100 artists of international acclaim. Great names like Marina Abramovic, Michelangelo Pistoletto, Louis Bourgeois, Mark Quinn… as well as young creative talents.
An everyday object, the cups designed by Matteo Thun are a blank slate to which protagonists of contemporary art take to with inspiration, rendering the joy of drinking an espresso an experience that involves both the senses and the mind.

Olimpia Zagnoli was born in Reggio Emilia in 1984 to a family of artists – her father a photographer, her mother a painter – before transferring to Milan while still young. She graduated from the IED in illustration and animation.

After graduation, she took her first steps in Italy with small, self-producing realities until venturing abroad in 2008. In New York, she encountered one of the art directors for the New York Times, and from that moment began various collaborations for important international publications including the Times, the Guardian, the New Yorker, Rolling Stone and Glamour.

Olimpia became known around the world for her distinguishable style using essential lines and geometrics along with round, colorful, pop figures. Her illustrations have made the pages of several prime advertising campaigns for important companies and have been used by notable fashion brands along with splashing the pages of children’s books.

Nestlé expands use of IBM blockchain technology to its Zoégas coffee b...

Mzb Group: the nominees for the office of Directors and Statutory Audi...