The daily composite indicator started on a high note, remaining above 120 US cents/lb until 14 September, when it fell to 116.97 US cents/lb. It continued to fall during the rest of the month, reaching a low of 108.09 US cents/lb on 29 September.

The Brazilian real also fell from mid- to late-September, erasing the gains made over the preceding three weeks.

Prices for all group indicators rose in September 2020 for the third consecutive month, though at a much slower rate compared to August. The largest increase occurred in the average price for Other Milds which grew by 2% to 166.56 US cents/lb.

The average arbitrage in September, as measured on the New York and London futures markets, rose by 1.1% to 58.73 US cents/lb.

After falling for seven consecutive months, stocks of certified Arabica increased by 68.7% to 2.45 million bags in September 2020 compared to August 2020.

In August 2020, world coffee exports fell by 7.5% to 10.04 million bags compared to August 2019. This was the lowest volume of shipments in August since 2015 when exports totalled 9.14 million bags, and may indicate a decline in demand, particularly as prices have increased in recent months while the outlook for global economic growth remains bearish.

The decrease in output is attributed primarily to the reduction in Brazil, as this was an off-year for its Arabica production, as well as to the ongoing low prices. Harvesting in most countries had already concluded by the time the pandemic occurred.

Colombia’s total production in 2019/20 is estimated at 14.1 million bags, 1.7% higher than in 2018/19, as strong growth in the first three months of the coffee year was followed by falling prices and adverse weather.

While there was a surge in demand at the start of the pandemic from panic-buying and stockpiling, consumption in the remaining months of the coffee year is estimated downwards due to ongoing pressure from a global economic downturn and limited recovery in out-of-home consumption, particularly as many countries are starting to experience a second wave of covid-19 at the end of the coffee year.

Compared to the previous year, demand in the top five consumers, which represent 63.7% of global consumption, slowed considerably in 2019/20. After two years of strong growth, consumption in the European Union is estimated at 45.04 million bags, 1.3% lower than last year.

Although both production and consumption decreased, 2019/20 is seen in surplus, with global output exceeding consumption by 1.54 million bags. The ICO composite indicator reached 107.25 US cents/lb in coffee year 2019/20. 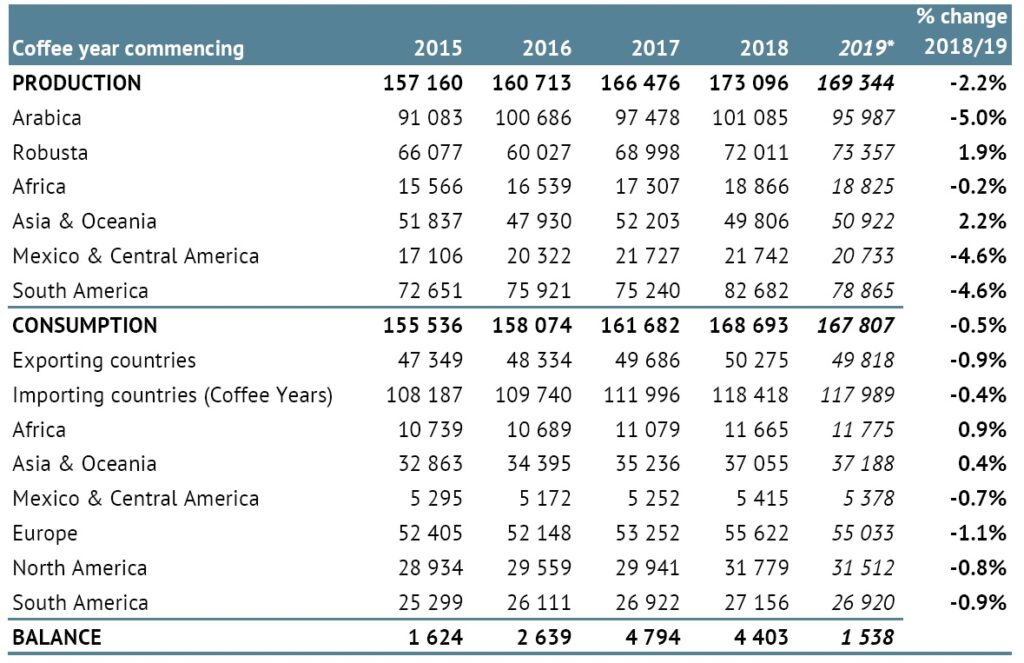 This compares to an average of 100.47 US cents/lb in 2018/19 when the surplus reached 4.4 million bags. This surplus, coupled with the majority of Brazil’s 2020/21 crop, an on-year in the biennial Arabica production cycle, reaching the market in the next few months, will limit further recovery in prices, concluded the Ico.