ABIDJAN, Côte d’Ivoire – This review of the cocoa market situation reports on the prices of the nearby futures contracts listed on ICE Europe (London) and U.S. (New York) during the month of February 2019. It aims to highlight key insights on expected market developments and the effect of the exchange rates on cocoa prices.

Chart I shows the development of the futures prices on the London and New York markets at the London closing time. Both prices are expressed in US dollars. The London market is pricing at par African origins, whereas New York prices at par Southeast Asian origins. Hence, under the same conditions, one would expect the futures prices in London to be higher than in New York.

Nevertheless, in May 2017, changes in the grading rules for ICE Europe led to a substantial increase in both the share of Bulk Delivery Units (BDUs), which are more expensive to grade/re-grade, and cocoa beans of less sought origin.

While continuing to monitor the effect of the change in the grading rule in the London market, signs of the return to normal market configuration started to appear during the last trading week of the month being reviewed.

This partly resulted from data showing that, during February, among the seven Cameroonian Original BDUs (7,000 tonnes) submitted for grading, two (2,000 tonnes) failed. Chart II depicts the change in the ICCO daily price index and the US dollar index in February. 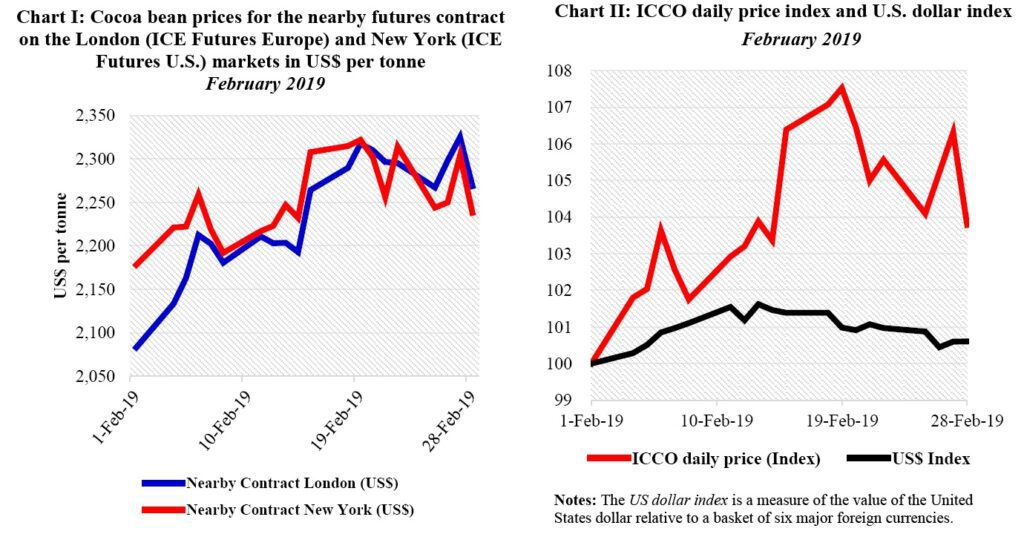 During February, the nearby cocoa contract prices perked up on both the London and New York markets as seen in Chart I. This upward trend was in reaction to prospects of an increasing demand coupled with adverse weather conditions that occurred in some West African cocoa growing regions.

Over the period 1-19 February, concerns over the impact of above normal temperatures in West Africa led to a substantial hike in prices in both London and New York. In particular, the dry and hot climate conditions that prevailed in the main cocoa cultivating areas in Ghana led market participants and forecasters to consider a downward revision to their prediction for the 2018/19 crop size in the country.

Finally, the strengthening of the US dollar – by nearly 1% – during the month of February had a negligible impact on the soar observed in the US-denominated cocoa price (Chart II). 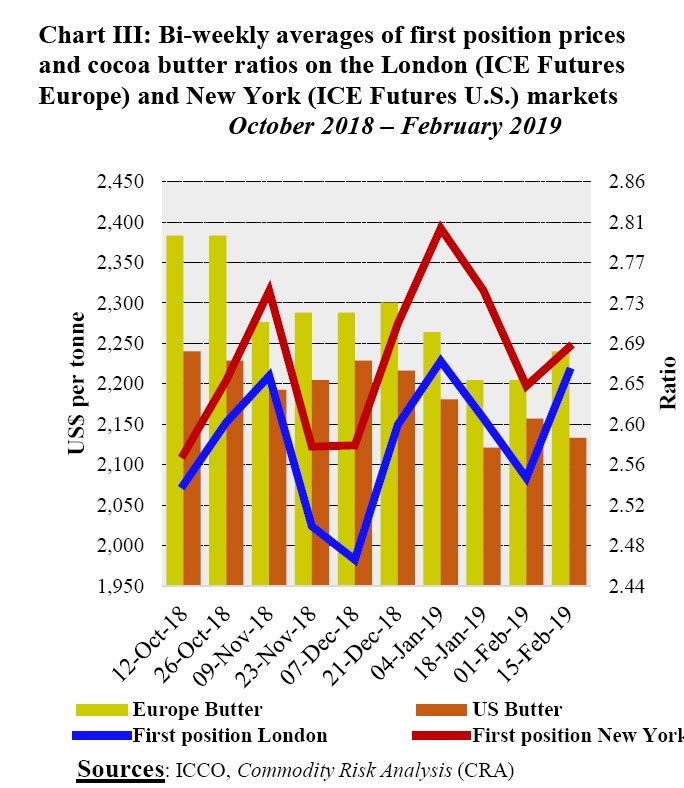 With the 2018/19 main crop drawing to a close, arrivals data show that, Côte d’Ivoire is about to top its record cocoa production established during the 2016/17 crop year at 2.020 million tonnes.

As at 10th March 2019, cumulative arrivals at Ivoirian ports were seen at 1.587 million tonnes, up from 1.441 million tonnes recorded during the same period last season. In Ghana, production is expected to remain stable despite a drought, as the country continues with the implementation of its Production Enhancement Programmes (PEP). Over the same timeframe, Nigeria’s output is expected to move downward by 10,000 tonnes to 245,000 tonnes.

The first forecasts for the 2018/19 crop season published by the ICCO Secretariat in its latest issue of the Quarterly Bulletin of Cocoa Statistics reveal an anticipated increase in world cocoa grindings of 2.6% compared to the previous crop season.

Grindings are expected to reach a record, settling at 4.712 million tonnes, up by 118,000 tonnes. This higher forecast reflects the unabated increase in demand which is mirrored by the steady growth in cocoa processing in origin countries as well as an increase in the demand for chocolates with high cocoa content.

It is projected that processing activities will grow by 1.6% to 1.737 million tonnes in Europe and by 4.3% to 1.096 million tonnes in Asia and Oceania whereas an increase of 1.9% to 981,000 tonnes is anticipated in Africa. In the Americas, with the operations of Ferrero in Canada, processing activities are forecast to expand by 3.1% to 899,000 tonnes as compared to the level attained in the same period of the previous season