ABIDJAN, Côte d’Ivoire – The adequate temperature and rainfall together with the mild Harmattan recorded in the previous months anticipated a good crop for the 2021/22 season, says the ICCO in its cocoa report for December 2021. Notwithstanding that, arrivals and purchases of cocoa beans from the two-top producing countries were reported to be down by 4% in Côte d’Ivoire (Figure 1), and a staggering 54% in Ghana.

At this stage, it is unknown whether, we are in presence of a poor season or other factors are affecting the evacuation of beans from upcountry. According to Le Conseil du Café-Cacao, since the beginning of the 2021/22 season, arrivals at ports reached 1.178 million tonnes as at 16 January 2022, down from 1.227 million tonnes recorded a year ago. 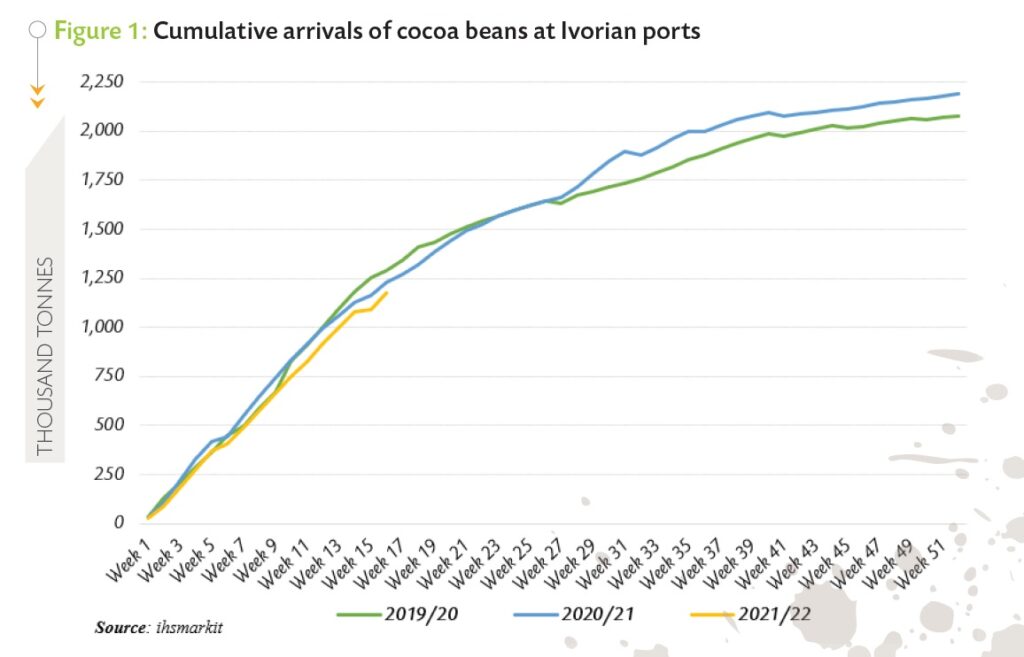 An overall positive trend was observed in the prices of the December 2021 (DEC-21) and March 2022 (MAR-22) cocoa futures contracts during December 2021, says the ICCO. This trend was fuelled by the optimism on demand for cocoa products, in at least the mid-term, and the low year-on-year arrivals recorded in main cocoa producing countries in Africa.

Figure 2 shows price movements on the London and New York futures markets respectively at the London closing time in December 2021, while Figure 3 presents similar information for the previous year. 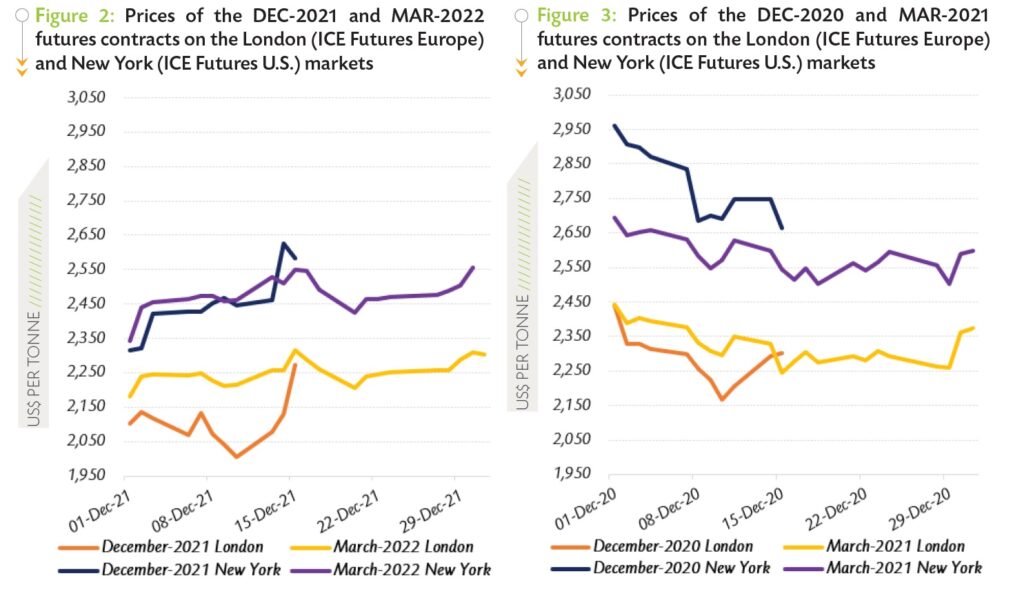 Back in December 2020, Figure 3 outlines that futures markets presented different configurations with the London one being in contango while in New York, cocoa futures market was in a pronounced backwardation.

It is worth noting that the contrasting market configurations observed a year ago in both London and New York was an aftereffect of the Exchange of Futures for Physical (EFP) that occurred in New York, thus creating a strong market tension over the DEC-20 contract.

During the month under review, the MAR-22 contract priced stronger on both the London and New York markets.

This was due to the anticipation of improvements in the demand; and the year-on-year lower arrivals of cocoa beans in main cocoa producing countries. Hence, compared to their settlement values recorded during the first trading day of December, prices of the MAR-22 contract moved upwards on both sides of the Atlantic, increasing by 6% from US$2,181 to US$2,304 per tonne and by 8% from US$2,342 to US$2,530 per tonne in London and New York respectively.

At this junction, it remains undetermined whether the observed low arrivals are caused by a poor crop – despite the conducive growing conditions – or other reasons.

At the end of 2021, the annual average price of the nearby contract in London had tumbled by 5% compared to the previous calendar year as seen in Table 1. During the same period in New York, the average of the first position contract prices weakened by 1% year-on-year.

Furthermore, the annual average of the US-denominated ICCO daily price stood at US$2,427 per tonne, up by 3% compared to level reached the previous year. On the contrary, the average of the Euro-denominated prices slightly dropped by 1% year-over-year, attaining €2,054 per tonne in 2021.