ABIDJAN, Côte d’Ivoire – This review of the cocoa market situation reports on the prices of the nearby futures contracts listed on ICE Futures Europe (London) and ICE Futures U.S. (New York) during the month of November 2019. It aims to highlight key insights on expected market developments and the effect of the exchange rates on the US-denominated prices.

Chart I shows the development of the nearby futures prices on the London and New York markets at the London closing time. Both prices are expressed in US dollars.

Chart II depicts the change in the US denominated ICCO daily price index and the US dollar index in November. 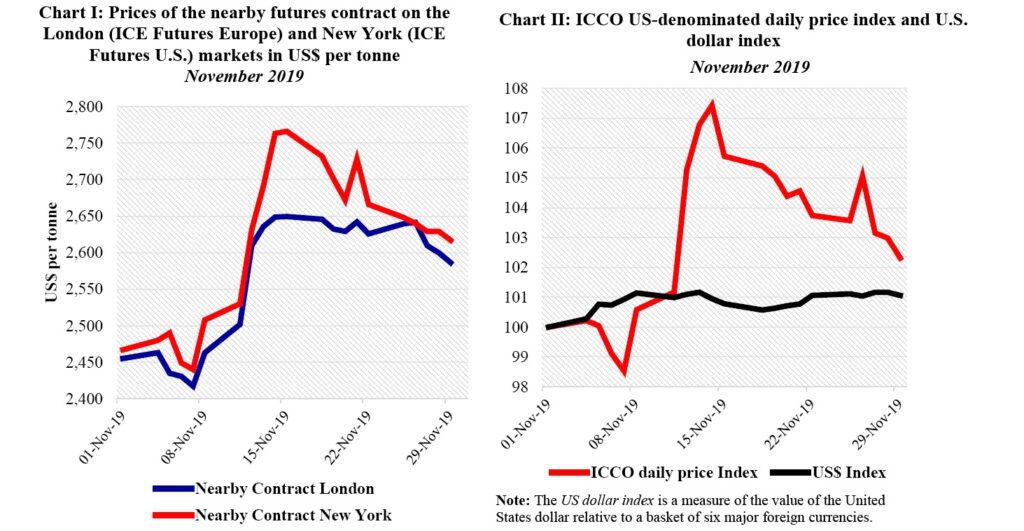 As illustrated in Chart I the nearby futures contract i.e. December 2019 (DEC 19) traded strongly on both the London and New York markets during November 2019. Compared to their values recorded during the first trading session of the month, prices ameliorated at the end of November by 5% from US$2,455 to US$2,586 per tonne and by 6% from US$2,467 to US$2,617 per tonne in London and New York respectively.

This increase was fuelled by prospects of a tight size for the ongoing crop combined with episodes of inappropriate meteorological conditions prevailing in the cocoa cultivation areas of the two premier producers (Côte d’Ivoire and Ghana).

On both the London and New York markets, three distinct stages were seen in the evolution of the front month contract prices. Although initial expectations indicated a relatively smaller output for the 2019/20 crop compared the level attained a year earlier during the timeframe 1-7 November, cocoa arrivals in Côte d’Ivoire and purchases in Ghana surpassed levels reached a year ago.

However, this decline in prices was brief and during the period 8-15 November, prices reverted from their plunge in response to increasing grindings and detrimental above average showers recorded in West Africa

In addition, concerns about the spread of black pod disease stemming from wetter weather conditions amplified the bullish trend seen in prices.

Chart II indicates that the US dollar appreciated by 1% during the analysis period while the ICCO daily price index strengthened by nearly 2% compared to its value at the beginning of November 2019. Hence, the amelioration in the US dollar weighed on cocoa prices.

Regarding cocoa powder, as compared to the levels reached at the start of 2019 prices increased by 17% from US$1,965 to US$2,306 per tonne in the United States. 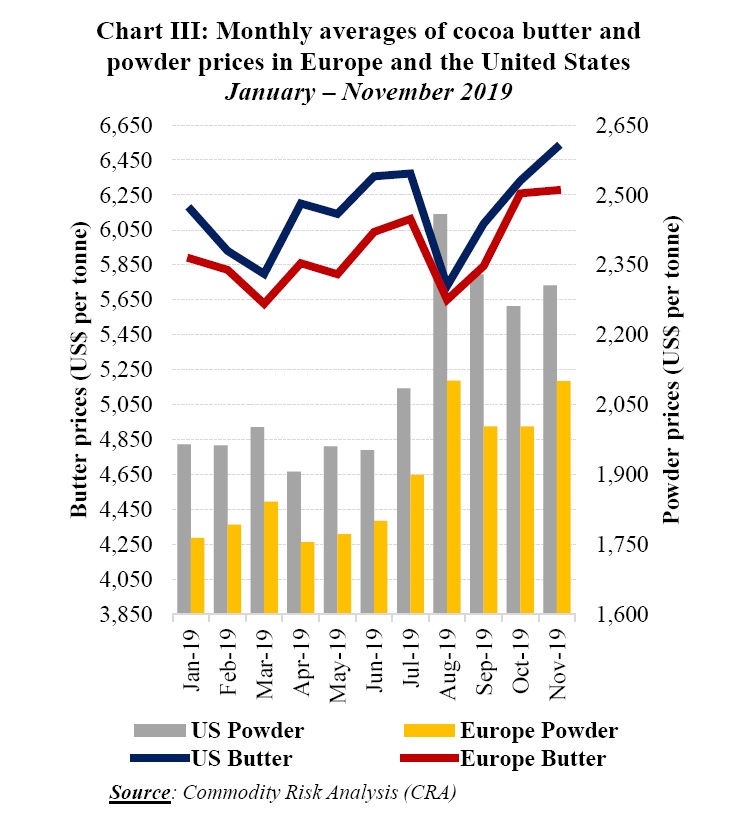 At the end of the second month of the 2019/20 crop year, arrivals in both Côte d’Ivoire and Ghana were established at levels lower than the volumes reached a year ago. Indeed, as at 1 December 2019, cumulative arrivals of cocoa beans at Ivorian ports were reported at 694,000 tonnes, down by 2% from 708,000 tonnes attained during the same period during the 2018/19 season.

Over the period 25 November – 1 December, 40,000 tonnes of cocoa beans were delivered to Abidjan port, whilst 47,000 tonnes were recorded at the San Pedro port.

The revised estimates published by the ICCO Secretariat in its latest issue of the Quarterly Bulletin of Cocoa Statistics show an increase in world grindings of 4.6% during the last season. Grindings reached 4.807 million tonnes, up by 211,000 tonnes.

This new estimate is evidence of the expansion in demand, which is especially reflected in the steady growth of cocoa processing in Asia and Oceania as well as origins countries. Processing activities are estimated to have grown by 14 3% to 1.201 million tonnes in Asia and Oceania and by 2.9% to 991,000 tonnes in Africa, whereas the Americas increase was of 2.8% to 897,000 tonnes.

Grindings in Europe slightly progressed by 0.5% from the previous season to 1.719 million tonnes.