ABIDJAN, Côte d’Ivoire – The International Cocoa Organization (Icco) has released its revised forecasts for the 2020/21 cocoa year and revised estimates of world production, grindings and stocks of cocoa beans for the 2019/20 cocoa year. The data published in Issue No. 3 – Volume XLVII – Cocoa year 2020/21 of the Quarterly Bulletin of Cocoa Statistics, reflect the most recent information available to the Secretariat as at the beginning of August 2021.

Though the pandemic triggered a shutdown of activities resulting in depressed commodity demand and supply disruptions, vaccination exercises have led countries to open and this is prompting a better outlook for commodities. Cocoa demand is seen to be recovering from the decline caused by the COVID-19 pandemic as the reopening of economies (retail facilities among others) has contributed to an improved utilization growth of cocoa. As far as cocoa supply is concerned, a record production is expected and a supply surplus is anticipated for the ongoing season.

For the current 2020/21 season, world production and grindings are projected to be higher than previously forecast. Compared to the figure published in the previous issue of the ICCO ‘s Bulletin, world production is forecast to attain a record level at 5.141 million tonnes (up by 117,000 tonnes).

The global production surplus is now forecast at 230,000 tonnes, compared with the Secretariat’s earlier projection of a surplus of 165,000 tonnes. Total statistical stocks of cocoa beans at the end of the 2020/21 season should therefore increase to 1.963 million tonnes, which is equivalent to 40.4% of the projected grindings for 2020/21.

Summary of forecasts and revised estimates (click to enlarge) 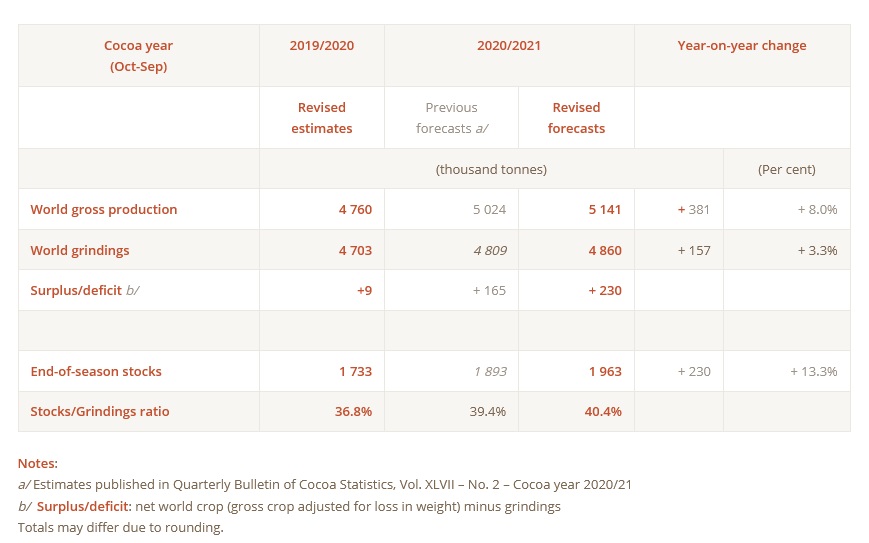 This issue of the  ICCO ‘s Bulletin contains the Secretariat’s revised forecasts for the 2020/21 cocoa year as well as data for the past four years of production and grindings of cocoa beans, detailed by country. The main features of the global market are illustrated in colour charts. In addition, the Bulletin includes comments on the crop and demand prospects in the leading countries for the current season, a review of price developments on international markets for cocoa beans during the April-June quarter of 2021 and the evolution of trade flow data estimated for major cocoa exporting and importing countries during the January – March 2021 quarter of the 2020/21 season.

Statistical information on trade in cocoa beans, cocoa products and chocolate, by country and by region, published in this edition, covers crop year data from 2017/18 to 2019/20 and quarterly statistics for the period July-September 2019 to January-March 2021. Details of origin of imports and destination of exports for leading cocoa importing countries are also provided. Historical statistics on cocoa trade by country and by region, for the period 2011/12 to 2019/20 are presented for reference.

Copies of the Quarterly Bulletin of Cocoa Statistics, in Microsoft Excel and Adobe PDF formats, can be ordered from the new ICCO e-Shop: www.icco.org/shop or by email: statistics.section@icco.org

The ICCO seeks to promote and support the economic, social, and environmental sustainability of the cocoa value chain, and in particular to improve the living conditions of cocoa farmers. The Organization acts as a center for knowledge and innovation in the World Cocoa Economy; as a platform for institutional cooperation to foster dialogue among its Member countries and between key stakeholders in the cocoa value chain; and as a source of technical assistance for its Member countries.