LONDON, UK – Some 23 countries are now recognized as exporting fine and flavour cocoa, after the ICCO member country delegates meeting on 28 May in the Dominican Republic approved the recommendations of the Organization’s expert Ad hoc Panel on Fine and Flavour Cocoa.

The Ad hoc Panel met last September to deliberate on the information presented by cocoa producing countries seeking to be included in the list of Annex “C” of the International Cocoa Agreement, 2010. For this meeting, a record 13 countries put forward their cases to the panel of experts for review.

The increase in demand for fine and flavour cocoa globally is evident as countries producing this type were able to demonstrate significant progress in their cocoa sectors, all of which were aiming at niche markets for high quality and speciality cocoa and chocolate products.

The experts recognized the efforts made by countries to improve and promote their fine cocoas, while noting that there was still room for improvement.

At the end of the deliberations, the Panel agreed on the percentage of exports of fine and flavour cocoa for each country.

Compared with the previous 2010 Panel meeting, which recognized 17 countries, the 2015 deliberations resulted in 23 cocoa producing countries being included in Annex “C” as partial or exclusive producers and exporters of fine and flavour cocoa.

The Council also approved a set of recommendations made by the experts about the running of the Panel, including a requirement for it to meet at least every two years.

The report of the meeting, and the list of recognized exporting countries of fine and flavour cocoa, are available to download by clicking here.

At the last meeting of the panel in September 2015, the following recommendations were made, and subsequently approved by the International Cocoa Council in May 2016: 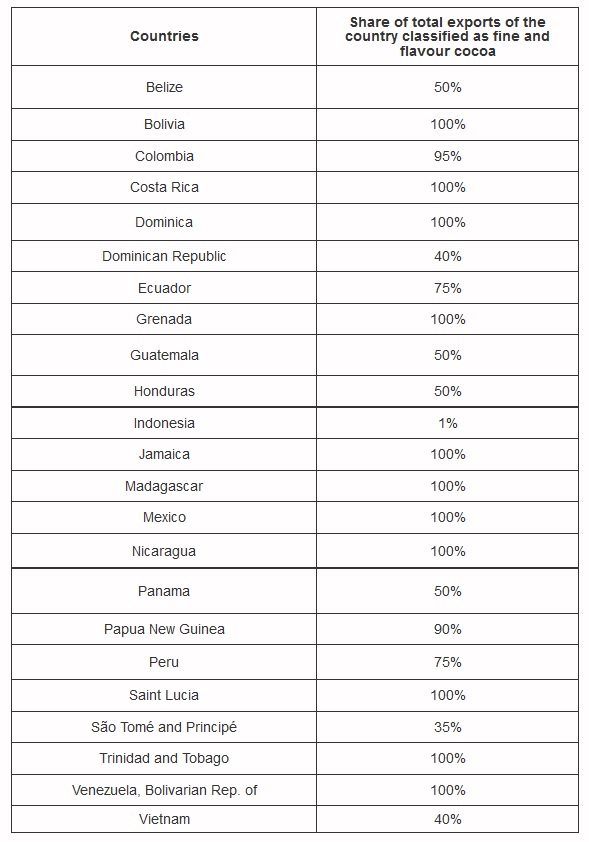