ABIDJAN, Côte d’Ivoire – This review of the cocoa market situation from the International Cocoa Organization (Icco) provides a brief on the December-2020 (DEC-20) and March-2021 (MAR- 21) futures contracts prices listed on ICE Futures Europe (London) and ICE Futures U.S. (New York) during the month of November 2020. It aims to highlight key insights on expected market developments and the effect of the exchange rate on the US-denominated prices of the said contracts. Figure 1 shows the development of the futures contracts prices on the London market while Figure 2 depicts the evolution of prices for the same futures contracts on the New York market at the London closing time.

Hence, by monitoring the evolution of the US dollar index in November, one can extricate the impact of the US dollar exchange rate on the development of the futures prices – denominated in US dollar – during the period under review.

Finally, Figure 3 presents monthly averages of the six-month forward prices for cocoa butter and powder in Europe and the United States since the beginning of 2020. The last figure provides regional trade balances for cocoa beans and cocoa semi-finished products. 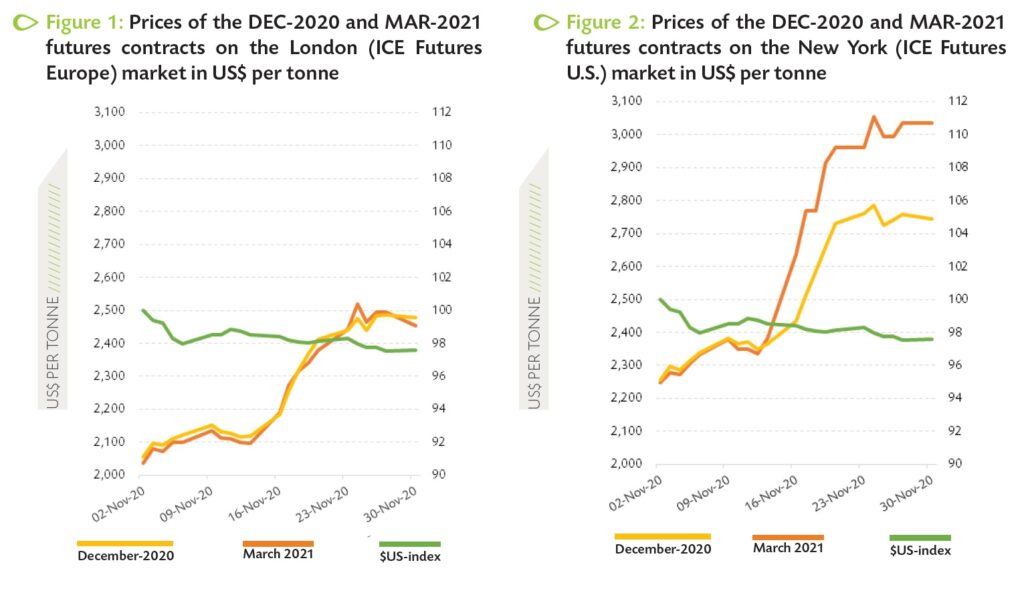 Cocoa futures markets were bullish during November. However, the London and New York markets reacted differently as a result of the non-identical dynamics in certified stocks. On the London market (Figure 1), the front-month contract (DEC-20) priced with an average discount of US$7 per tonne over the MAR-21 contract. On the contrary, in New York (Figure 2), the DEC-20 futures contract traded with an average premium of US$124 per tonne over the MAR-21 futures contract.

The strong market pressure seen on the DEC-20 contract in New York was fueled by an Exchange of Futures for Physical (EFP). In particular, in November, a long position of 4,000 DEC-20 contracts was exchanged for 40,000 tonnes of physical cocoa. The U.S. Commodity Futures Trade Commission exempted the long from the limit of 1,000 contracts since the trader was able to show that this transaction was a bona fide edge.

Moreover, the price differential between the London and New York markets increased from US$210 at the beginning of the month to US$581 per tonne by the end of the month due to the aforementioned EFP. Furthermore, the differential can also be attributed to the substantial share of poor-quality cocoa in European certified stocks.

Concerning developments on futures markets, prices escalated by 20% from US$2,038 to US$2,454 per tonne in London, and by 35% from US$2,248 to US$3,035 per tonne in New York by the end of November. Several factors led to this price rally. For example, compared to levels seen a year earlier, the average certified stocks in the Exchange’s licensed warehouses plunged by 11% from 110,399 tonnes to 97,846 tonnes in London while in New York, certified stocks significantly collapsed by 45% from 21,027 tonnes to 11,505 tonnes. Some disruptions in the haulage of cocoa beans were also reported in Côte d’Ivoire in November. In addition, the combination of the announcements of COVID-19 vaccines which signalled optimism for demand and a 2% depreciation of the U.S. dollar during November further contributed to supporting price hikes.

Movements of cocoa futures and cocoa butter prices are generally positively correlated, whereas the inverse occurs with cocoa powder prices. Figure 3 shows that compared with the average prices recorded at the start of the year 2020, prices for cocoa butter were down 19% in both Europe and the United States during November. Indeed, prices for cocoa butter collapsed from US$6,824 to US$5,540 per tonne in the United States, while in Europe they dropped from US$6,549 to US$5,333 per tonne. 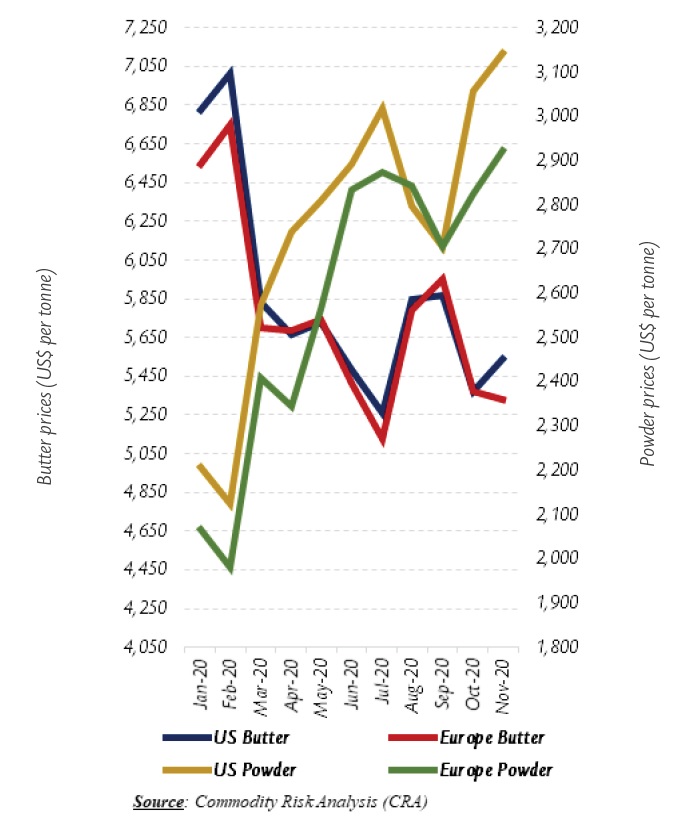 The decline in processing activities as a result of the COVID-19 pandemic has triggered a downward pressure on cocoa beans and butter prices.

Furthermore, compared to their average values recorded during the first month of 2020, the front-month cocoa futures contract prices were discounted by 10% from US$2,516 to US$2,253 in London at the end of November 2020. In New York, prices of the nearby cocoa contract decreased by 1% from US$2,675 to US$2,636 per tonne over the same period.

At the end of the second month of the 2020/21 crop season, the latest available data showed that, arrivals in Côte d’Ivoire were at levels higher than the volumes reached a year ago. Indeed, as at 29 November 2020, cumulative arrivals of cocoa beans at Ivorian ports were reported at 740,000 tonnes, up by 10.1% from 672,000 tonnes attained during the same period of the 2019/20 season. On the contrary in Ghana, purchases of graded and sealed cocoa stood at 146,886 tonnes by 5 November 2020, representing a 10.0% decline compared to the 163,162 tonnes recorded the same period a year ago.

The revised estimates published by the ICCO Secretariat in its latest issue of the Quarterly Bulletin of Cocoa Statistics (QBCS) show a reduction in world grindings of 3.2% during the last season (2019/20). Grindings were estimated at 4.631 million tonnes, down by 152,000 tonnes year-on-year. These new estimates are evidence of the harmful effect of the coronavirus pandemic on demand for cocoa and chocolate products worldwide.

Regional trade balances for cocoa beans and cocoa semi-finished products – in tonnes of beans equivalent – during the periods October 2018 – June 2019 and October 2019 – June 2020. 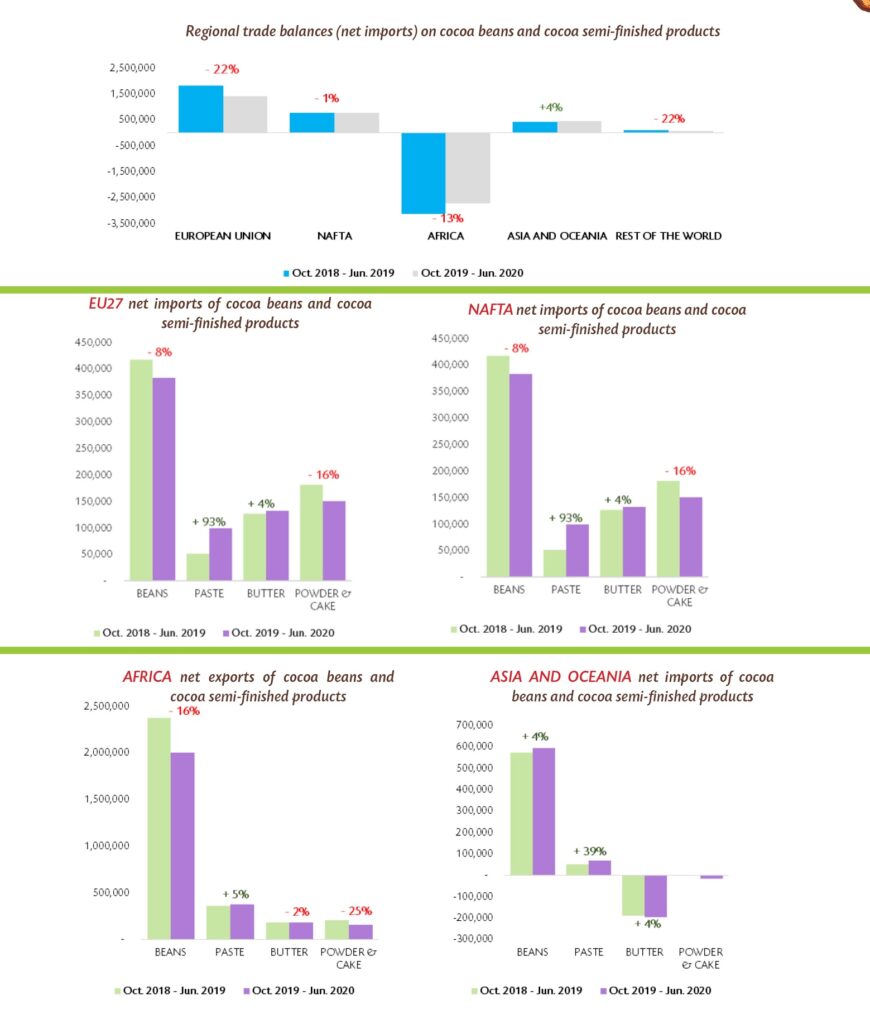 Icco revises its estimates of world production, grindings, and stocks for 2019/20 cocoa year