ABIDJAN, Côte d’Ivoire — This review of the cocoa market situation focuses on the prices of the nearby futures contracts listed on ICE Futures Europe (London) and ICE Futures U.S. (New York) during the month of April 2020. It aims to highlight key insights on expected market developments and the effect of the exchange rate on the US-denominated prices. Chart I shows the development of the nearby futures contract prices on the London and New York markets at the London closing time.

Both prices are expressed in US dollars. Chart II depicts the change in the US dollardenominated ICCO daily price index and the US dollar index in April.

Chart III presents monthly averages of cocoa butter and powder prices in Europe and the United States since the start of the 2019/20 crop year. 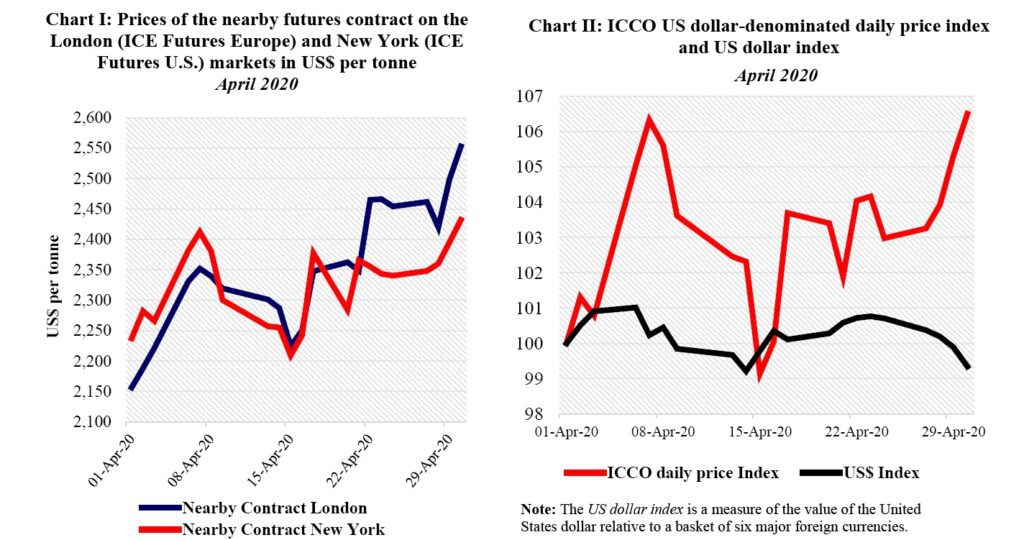 This bullish stance was an aftereffect of a decline in the supplies of cocoa beans from West Africa’s top producing countries and less conducive meteorological conditions that prevailed in the region.

The bullish factors that supported prices during this period included recording of below average rainfalls in West Africa and tightened ports arrivals in Côte d’Ivoire.

Chart II depicts the US dollar index remaining virtually flat during the analysis period while the ICCO daily price index weakened by 6.5% compared to its value at the beginning of April 2020.

Hence, the appreciation in cocoa prices was mainly fueled by market fundamentals rather than currency movements.

Chart III shows that compared with the average prices recorded at the start of the 2019/20 cocoa year, prices for cocoa butter plunged on both of the world’s largest cocoa consuming markets namely Europe and the United States during April. Indeed, prices for cocoa butter sunk by 11% from US$6,331 to US$5,663 per tonne in the United States, while in Europe they weakened by 9%, moving from US$6,260 to US$5,683 per tonne. 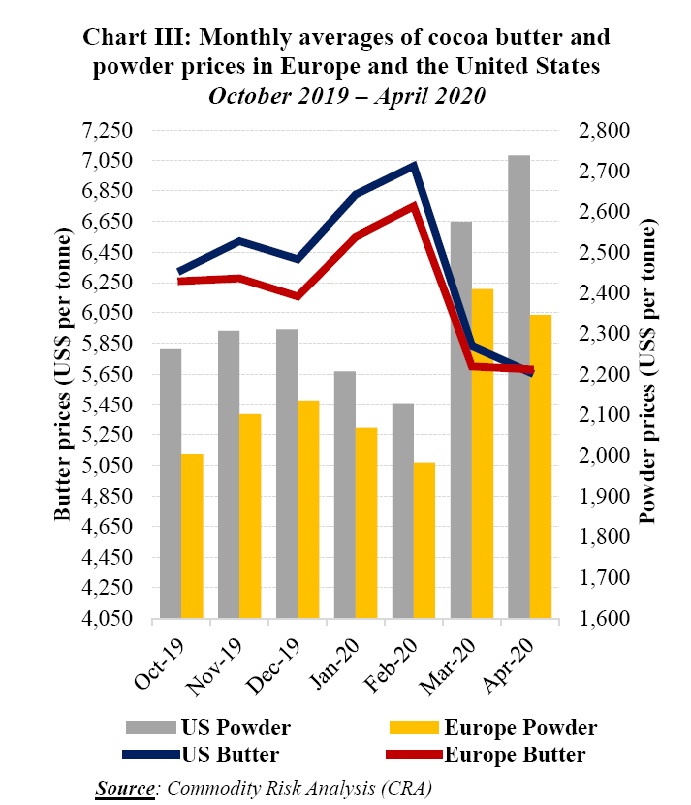 Regarding cocoa powder, compared to the levels reached in October 2019, prices witnessed a substantial upsurge on both markets increasing by 21% from US$2,261 to US$2,738 per tonne in the United States.

During the same time frame in Europe, powder prices rose by 17% from US$2,003 to US$2,344 per tonne. Furthermore, compared to their average values recorded in October 2019, the nearby cocoa futures contract prices declined by 3% and 6% in London and New York respectively at the end of April 2020.

In Ghana, cumulative volumes of graded and sealed cocoa were seen at 693,000 tonnes by 2 April, down by 0.9% from 699,000 tonnes posted a year earlier at the same period. Compared to the same period last year, grindings data released by regional cocoa associations for the second quarter of 2019/20 showed diverse trends in Africa, Europe, Asia and North America.

The Cocoa Association of Asia published a modest decline in grindings of 0.5% to 207,356 tonnes. Data published by the Ivorian exporters’ association (GEPEX) showed that Côte d’Ivoire’s grindings for the second quarter of 2019/20 reached 282,000 tonnes, up by 4.4% from 270,000 tonnes grinded over the same period of the previous crop year.

For the period January-March 2020, European grindings data published by the European Cocoa Association showed a 0.9% increase to 373,625 tonnes, while the National Confectioners’ Association published a 5.1% dip to 115,591 tonnes for North America.