ABIDJAN, Côte d’Ivoire – This review of the cocoa market situation focuses on the prices of the nearby futures contracts listed on ICE Futures Europe (London) and ICE Futures U.S. (New York) during the month of March 2020. It aims to highlight key insights on expected developments in the cocoa market and the effect of the exchange rate on the US-denominated prices.

Chart I shows the development of the nearby futures contract prices on the London and New York markets at the London closing time. Both prices are expressed in US dollars.

Chart III presents monthly averages of cocoa butter and powder prices in Europe and the United States since the start of the 2019/20 crop year. 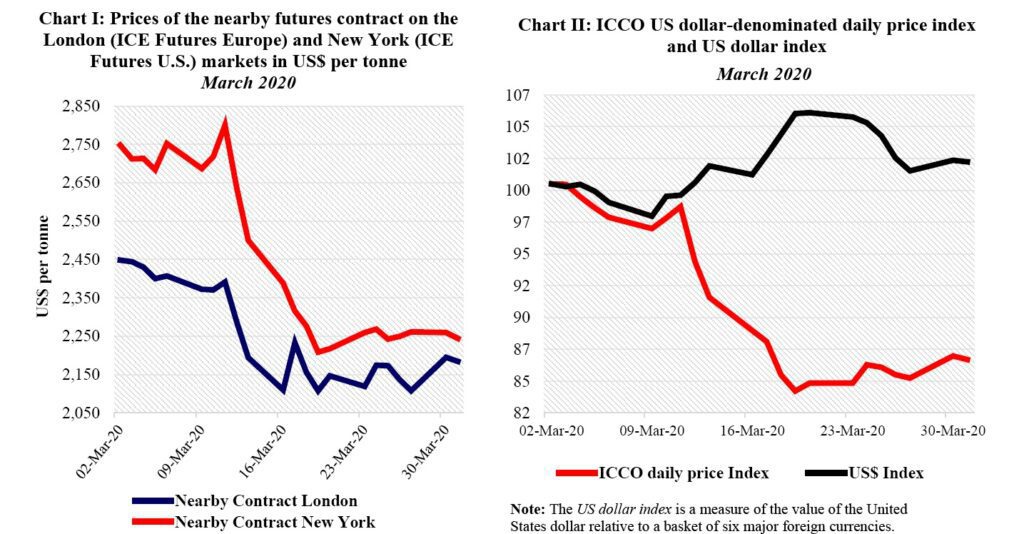 In particular, starting from 11 March, the US$-denominated prices declined abruptly as a result of an unexpected increase in the supply of Côte d’Ivoire and Ghana and the improvement of weather conditions in West Africa, on the one hand, and the rapid appreciation of the US$ against all major currencies by 5.5% during the period 11 to 24 March (Chart II).

Moreover, starting from 11 March, the differential between the New York and the London markets started to decline as the March contract – which was in backwardation only in the New York market – approached its expiration on 16 March.

The March contract was trading with a premium over deferred contracts to attract additional volumes of cocoa warrants. The backwardation of futures contracts close to expiry is now a recurrent feature of both the London and New York futures markets.

This is the direct result of the progressive withdrawal of Ivorian and Ghanaian beans from exchange-certified stocks in anticipation of the Living Income Differential (LID) which will start at the beginning of the 2020/21 season.

Chart III shows that compared to the average prices recorded at the start of the 2019/20 cocoa year, prices for cocoa butter sunk on both of the world’s largest cocoa consuming markets namely Europe and the United States during March.

During the same time frame in Europe, powder prices rose by 20% from US$2,003 to US$2,408 per tonne. In addition, compared to their average values recorded in October 2019, the front-month cocoa futures contract prices weakened by 7% and 0.2% in London and New York respectively at the end of March 2020. 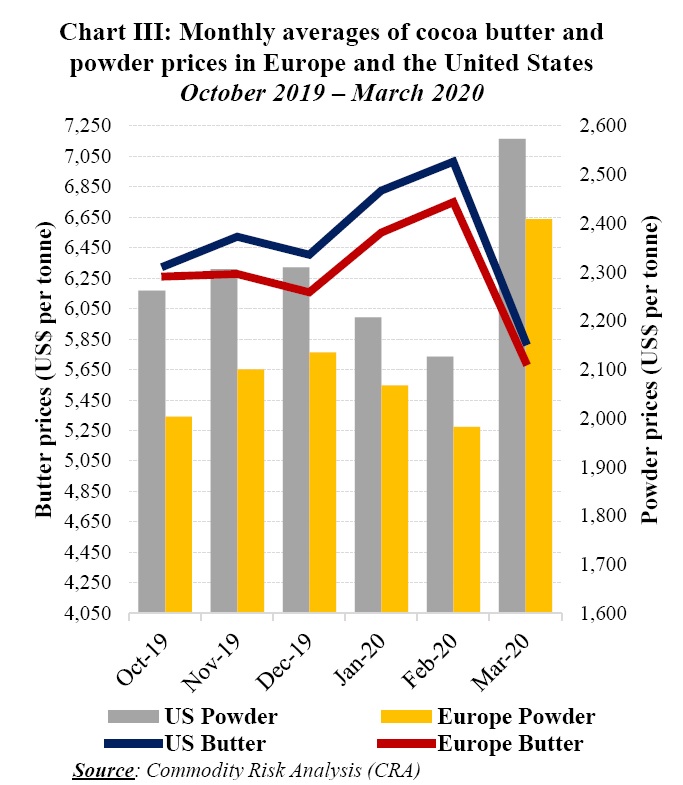 In Côte d’Ivoire, the 2019/20 mid-crop started in April with the Government’s decision to maintain the farmgate price at XOF 825 (US$1.40) per kilogram of cocoa beans; the same price as during the main crop.

In addition, the country was reported to have exported 914,680 tonnes of cocoa beans during the first five months of the 2019/20 crop year; down by 3.5% from the level reached the same period a year earlier.

As for semifinished products of cocoa, Côte d’Ivoire exports declined abruptly by 22% year-on-year to 147,431 tonnes.