This review of the cocoa market situation reports on cocoa price movements on the international markets during the month of December 2017. It aims to highlight key insights on expected market developments and the effect of the United States dollar exchange rates on cocoa prices.

Chart I shows variations in the London and New York prices of the nearby cocoa futures contract, both expressed in United States dollars.

As a result, a study of their price differences provide insights on the relative, expected availability of cocoa beans on these exchanges at expiry of the futures contract. Chart II illustrates the impact of the United States dollar fluctuations on cocoa prices. 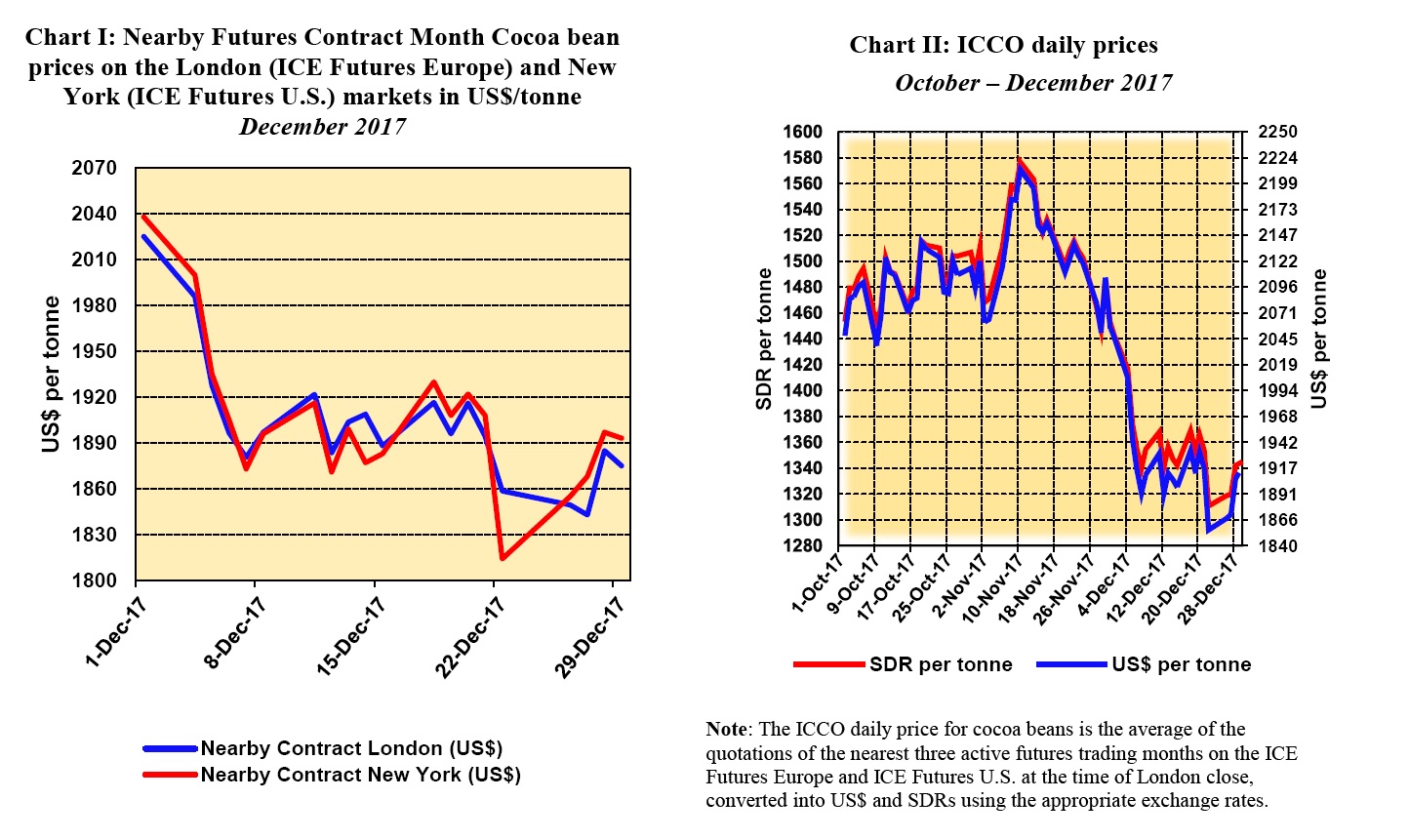 During the first week of the month under review, prices sharply fell down by 7% from US$2,025 to US$1,881 in London and from US$2,038 to US$1,873 in New York. Favorable weather conditions in West Africa weighed negatively on cocoa prices trend.

As seen in Chart I, the second and third weeks of December experienced relatively stable prices with some upticks over the period.

However, the nearby contract’s price reached its lowest level during the last week of the month under review settling respectively at US$1,843 and US$1,814 per tonne in London and New York.

The acute drop in prices resulted from anticipations of a better than expected 2017/18 cocoa crop output from Côte d’Ivoire and Ghana.

As illustrated in Chart II, starting from the second week of December, the US-denominated ICCO price has traded at levels lower than the SDR-denominated price.

This was due to the appreciation of the US Dollar against all major currencies making up the SDR basket.

The mild ongoing harmattan season in Côte d’Ivoire is supporting the expectations of a good crop output for the current cocoa season. Nevertheless, cumulated cocoa beans arrivals at ports in Côte d’Ivoire as at 14 January 2018 are down by nearly 4% compared to the previous season.

Under the same conditions, the 2017/18 production in Côte d’Ivoire might be lower than the record levels of the past season. At the time of writing, there were no official news on cocoa purchases from the Ghana Cocoa Board since the start of the season.

On the demand side, compared with the same period during the previous season, fourth quarter grindings data published by the European Cocoa Association (ECA) showed a four per cent increase to 353,286 tonnes in European grindings.

Grindings data published by the US National Confectioners’ Association (NCA) show an annual decrease of 1.28% to 116,089 tonnes while figures from the Cocoa Association of Asia for the fourth quarter showed a solid increase of 4%.

At the end of 2017, prices recorded a strong drop over the previous year decreasing by 22% on the London market and 12% on the New York market as seen in Table 1.

The US-denominated ICCO daily price registered an annual decrease of 13% to settle at US$2,262 compared with the previous year, while the SDR-denominated price decreased by 18%.