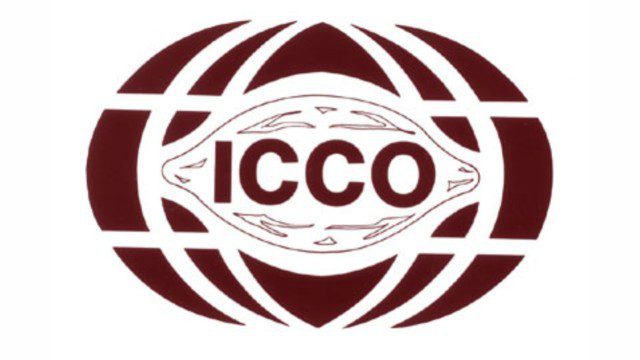 The current review reports on cocoa price movements on the international markets during February 2015.

Chart I illustrates price movements on the London (ICE Futures Europe) and New York (ICE Futures U.S.) markets for the month under review.

Chart II shows the evolution of the ICCO daily price, quoted in United States dollars and in SDRs, from December 2014 to February 2015.

Chart III depicts the change in the ICCO daily price Index, the Dow Jones Commodity Index and the US Dollar Index in February, while Chart IV shows recent changes in warehouse stocks of cocoa beans and the price differential between the two cocoa futures markets. 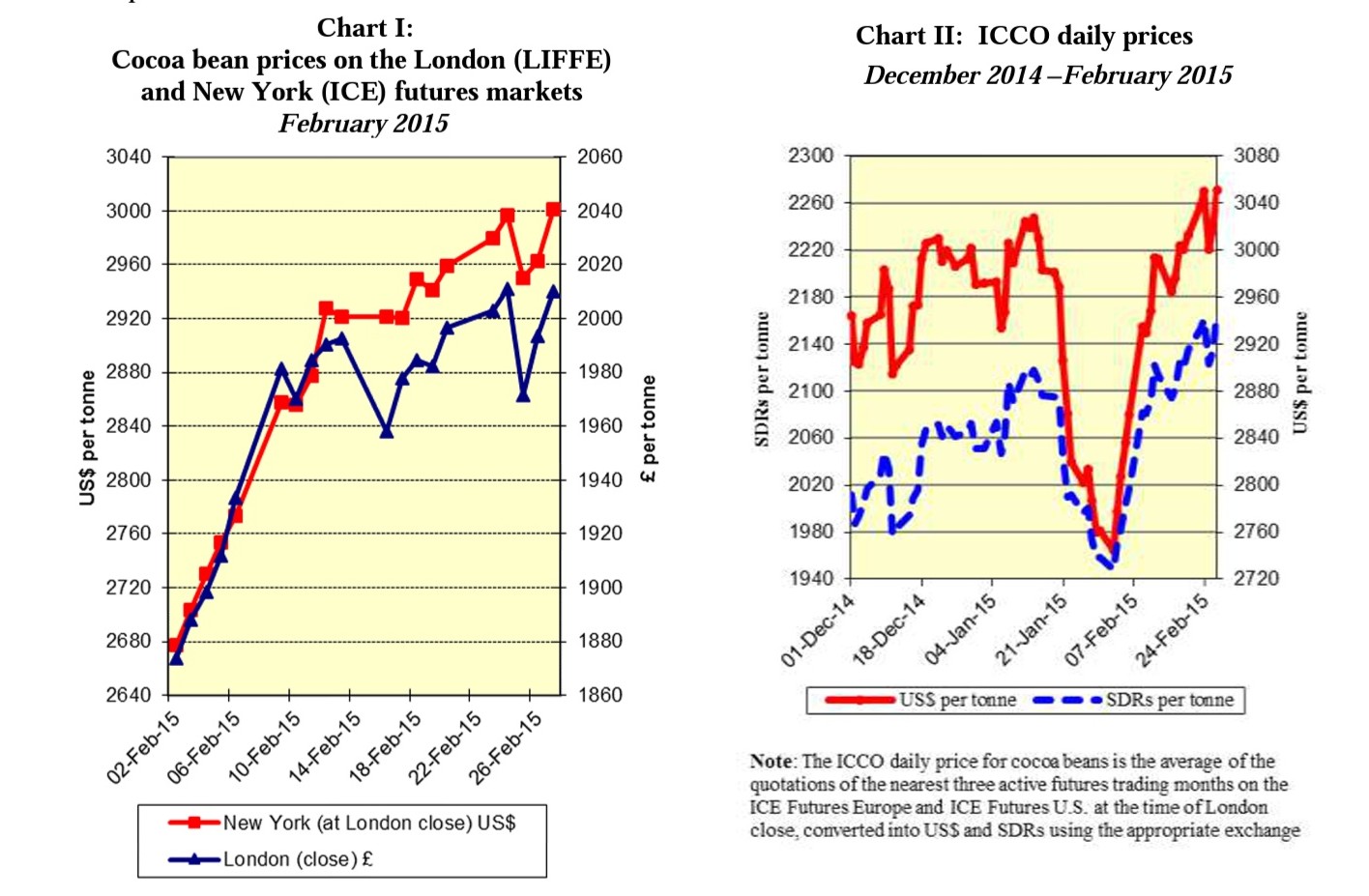 Cocoa prices started the month at a ten-week low of £1,874 per tonne in London and at a one year low of US$2,677 per tonne in New York as disappointing grindings data published in the middle of the previous month continued to weigh on cocoa futures prices.

However, as seen in Chart I, from the second trading session through to the second week of the month, cocoa futures prices followed an upward trend in prices.

While arrivals in the two ports of Côte d’Ivoire were strong in the first two months of 2015, disappointing purchases figures from Ghana, coupled with persistent concerns over dry weather conditions in some of the cocoa-producing areas in West Africa and their probable negative impact on the upcoming mid-crops, were the main fundamental reasons that influenced the increase in cocoa futures prices.

Thus, during the last week of the month, cocoa futures prices attained their highest level for the month, at £2,011 per tonne in London and a four-month high at US$3,001 per tonne in New York.

As illustrated in Chart III, the U.S. dollar was stable compared to other currencies during the month, thereby having a minimal impact on commodity price developments.

Cocoa futures prices rose at a stronger pace than the broader commodity complex, mainly due to supply concerns. 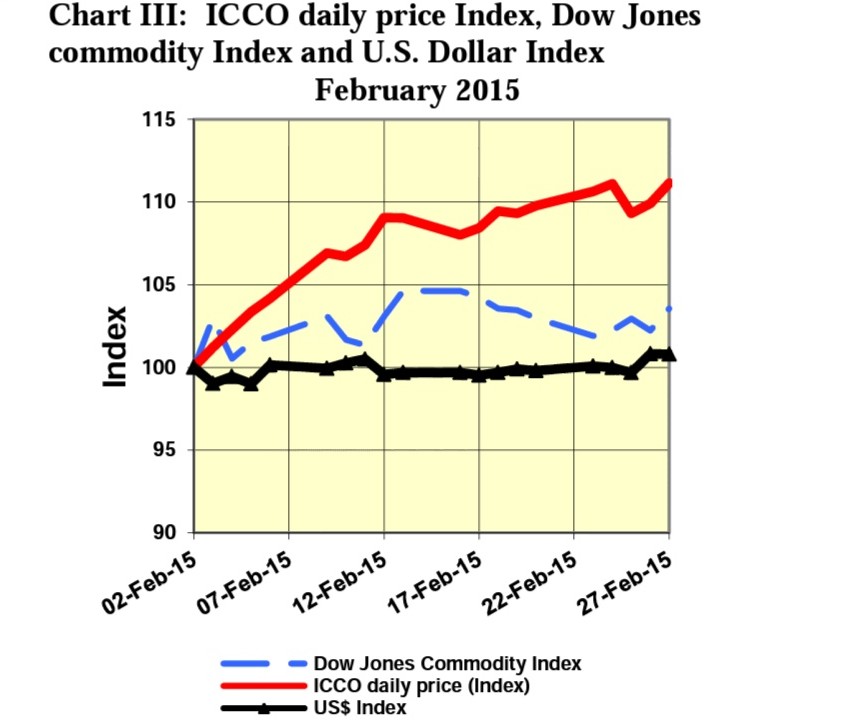 Data from news agencies indicated that cocoa arrivals at ports in Côte d’Ivoire reached 1,218,000 tonnes by 8 March. This was four per cent higher than the data for the corresponding period of the previous season. However, as the main crop tails off, expectations for the mid-crop remain mixed.

Total output for Ghana is expected to be lower than that of the previous season due to unfavourable weather conditions and the spread of small-scale mining. Investigations are underway to verify if there are other factors causing the decline in the country’s cocoa production. 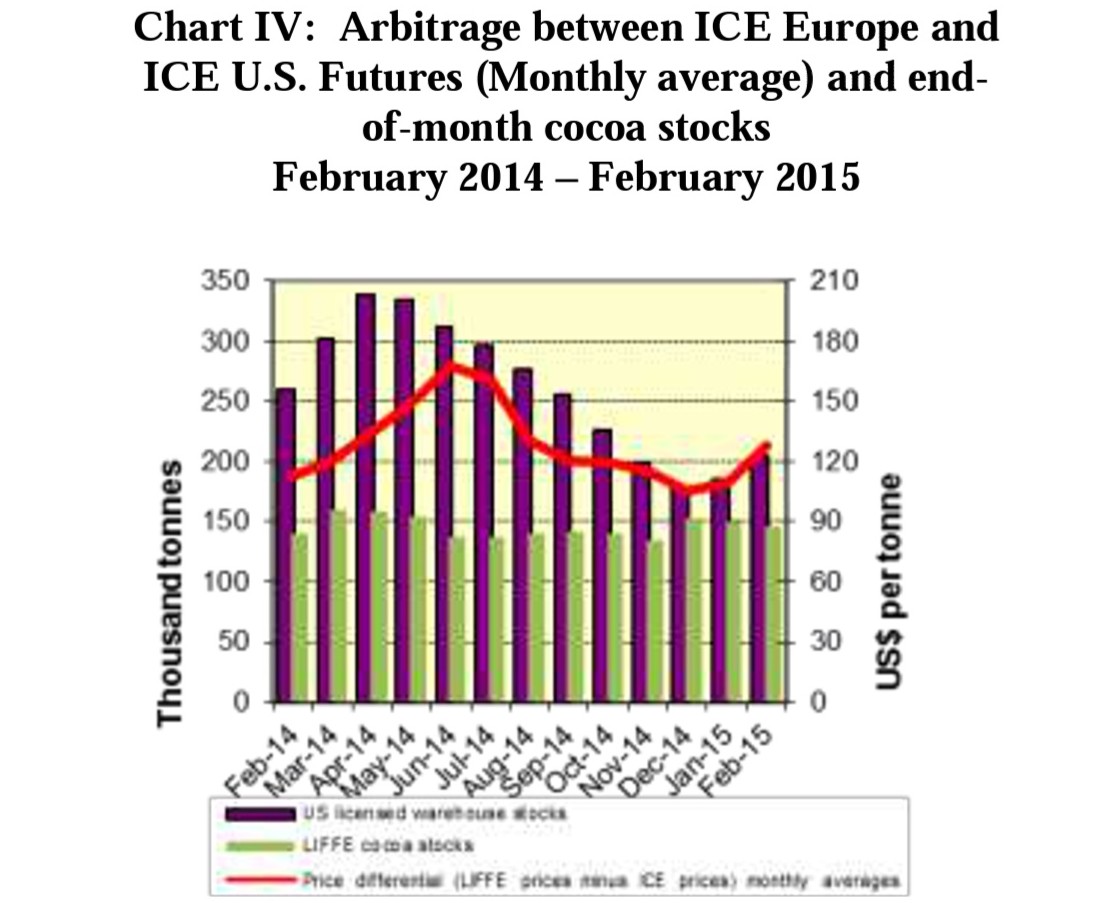 As seen in Chart IV, the rise in the volume of certified warehouse stocks initiated during the previous month continued in February on the U.S. market. Indeed, in New York, volumes rose from 185,165 tonnes to 204,192 tonnes; whereas in London, a decrease from 149,800 tonnes to 145,090 tonnes was recorded.

This resulted in the arbitrage widening from an average of US$109 in January to US$128 in February 2015.

The ICCO Secretariat’s first forecasts for the current 2014/2015 cocoa year, published in the latest issue of the Quarterly Bulletin of Cocoa Statistics, envisage a supply deficit of around 17,000 tonnes.

If realized this would decrease the total statistical stocks of cocoa beans as at the end of the 2014/2015 cocoa year from 1.626 million tonnes in the previous season to 1.609 million tonnes, which would be equivalent to 38% of projected annual grindings for the current season