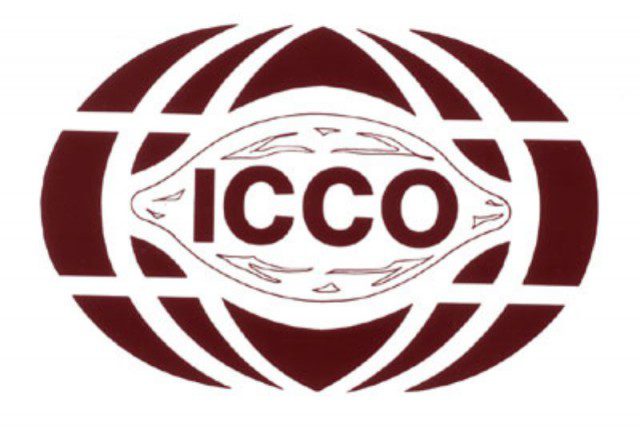 The current review focuses on cocoa price movements on the international markets during the month of December 2014.

Chart I illustrates price movements on the London (ICE Futures Europe) and New York (ICE Futures U.S.) markets in December. Chart II shows the evolution of the ICCO daily price, quoted in US dollars and in SDRs, from October to December 2014. Chart III depicts the change in the ICCO daily price Index, the Dow Jones Commodity Index and the US Dollar Index. Table 1 summarizes major price developments in 2014. 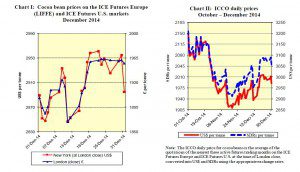 However, as shown in Chart I, during the second week of the month, underpinned by the slow pace of cocoa bean arrivals from Côte d’Ivoire, cocoa futures prices recovered from their earlier losses and rose to £1,934 per tonne in London and to US$2,933 per tonne in New York.

The rise was short-lived as the strengthening of the United States dollar led to a fall in prices for most commodities.

This steady rise in cocoa prices was supported by reports of unfavourable weather conditions resulting from relatively strong Harmattan winds combined with acute heat in the West African region.

The impact of the adverse weather conditions on cocoa supplies led cocoa futures prices to rise sharply to their highest levels in December, at £1,963 per tonne in London and at US$2,961 per tonne in New York.

Towards the end of the month, cocoa prices lost ground in New York, falling to US$2,895, while remaining stable in London, and ranging between £1,957 and £1,962 per tonne, as origin hedging activities weighed on the market.

As depicted in Chart III, under the influence of the strength of the U.S. dollar against other major currencies, commodity prices followed a downward trend during the month. By contrast, cocoa prices were broadly firm and did not mirror the general development in the commodity market during the month under review. 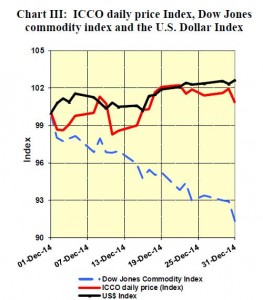 As reported by Reuters, port arrivals in Côte d’Ivoire were estimated at 820,000 tonnes by 4 January 2015, compared to 954,000 tonnes for the same period of the previous season. Concerns have been raised in the main cocoa growing regions in regard to the relatively intense Harmattan weather and its effects on supplies.

The aforementioned weather conditions have also been witnessed in Ghana. As at 25 December 2014, cumulative cocoa purchases for the season in Ghana reached 430,773 tonnes, a decrease of almost 23% over the 557,279 tonnes recorded in the first 12 weeks of the previous season.

Grindings data by the European Cocoa Association (ECA) and the U.S. National Confectioners’ Association for the fourth quarter of 2014 are due to be released shortly, with the former expected to show a year-on-year
decrease.

As depicted in Table 1, at the end of 2014, the London and New York markets recorded increases over the previous year, of 13% and seven per cent respectively.

This surge in cocoa prices occurred despite the production surplus estimated for the 2013/2014 cocoa year. As noted in previous reviews, cocoa prices rallied to more than a three year high in September 2014, as concerns were raised over the potential impact of the Ebola outbreak in West Africa for cocoa production.

While the West African cocoa harvest experienced a significant decline in the first quarter of the 2014/2015 main crop, diverging expectations subsist among cocoa analysts with regard to the second quarter, with some expecting a strong recovery.
Although there is a general consensus regarding weak demand growth in 2014/2015, there is no consensus in relation to the 2014/2015 market balance, with some analysts expecting a production surplus and others a deficit.

Weather in Central America, possible damages to coffee crops push up a...

7-Eleven gets in the holiday spirit with launch of Candy Cane flavored...