ABIDJAN, Côte d’Ivoire – In line with various concurring events such as surging energy prices, rising inflation coupled with a slow growth, the current global economic situation signals a plausible stagflation or even a recession, says the International Cocoa Organization (ICCO) in its latest report. Sanctions imposed on the Russian Federation and Belarus due to the ongoing conflict in Ukraine have led to further hikes in energy prices.

Increases in consumer prices, interest rates and the recent outbreak of coronavirus in China are suppressing growth. 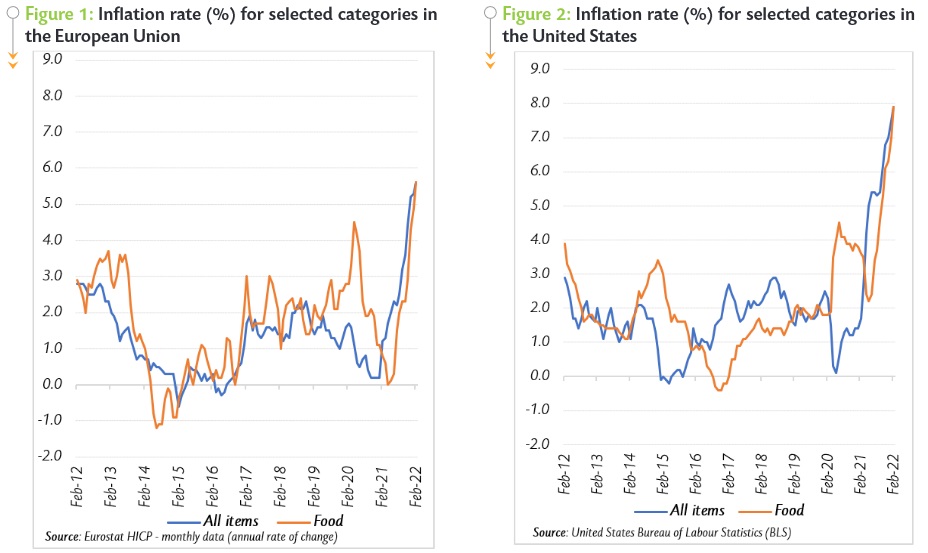 With this level of inflation, the purchasing power of consumers is eroded. This very often leads the consumption of necessity or essential goods being prioritized over luxury goods, including cocoa products. However, at this stage, it is too early to extricate the real effect of the current global macroeconomic factors on the demand for cocoa products.

The grindings data for the first quarter of 2022 which are due for publication in April 2022, will provide a first indication on the direction of the global cocoa demand.

Energy prices (crude oil and gas) on the rise

The increase in energy prices could have an impact on both cocoa exporting and importing countries. On the one hand, costs of haulage of cocoa from plantations to ports of export and shipping are likely to move up, hence making the acquisition of cocoa beans more expensive in consuming markets.

On the other hand, it is envisaged that the increase in energy costs will trigger a rise in operation costs for cocoa processors and chocolate manufacturers, which in turn will result in either a reduction in processing margins or an increase in prices of cocoa products or even both

For example, with the inflation in UK soaring to 6.2% recently and in order to offset rising costs including energy bills, Mondelēz International (owner of Cadbury Dairy Milk) indicated that the size of sharing bars will be reduced by 10% while maintaining the same price, with the blame being put on inflation and the costs of producing chocolate1. 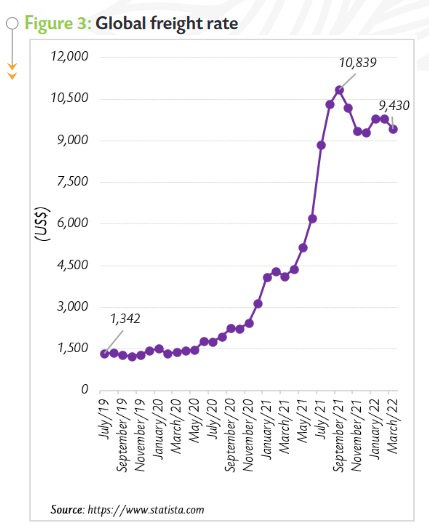 Moreover, the impact of soaring freight charges on the global cocoa trade cannot be overlooked as the maritime trade plays a significant role in the global trade. According to the International Monetary Fund (IMF), “the sea carries more than 80 percent of the world’s traded goods, most of which sail inside 40-foot-long steel”2.

To curb the outbreak of COVID-19 cases, lockdowns were imposed in most countries and resulted in diverse disruptions, thereby weighing on the efficiency of the global supply chain system. Port closures/congestions and social distancing among others created pressure on the demand for containers.

Notwithstanding the prolonged period of increases, since the beginning of the 2021/22 cocoa year, container freight rates have started declining but historically remain at high levels and reached US$9,430 in March 2022 – perhaps thanks to efforts to bring global shipment back to normal.

As at 10 April 2022, cumulative cocoa arrivals at Ivorian ports for the 2021/22 cocoa year were estimated at 1.709 million tonnes, up by 1.2% from the level recorded over the same period last season.

The association of Ivorian cocoa processors (GEPEX) posted data showing that, at the end of February 2022, cocoa grindings in the country had increased by 3.95% year-on-year from 253,000 tonnes to 263,000 tonnes.

In Ghana, the latest information indicates that purchases of graded and sealed cocoa beans were very low year-on-year (down by 34% to 524,000 tonnes as at 31 March 2022) mainly due to unfavourable weather conditions that occurred in the country’s main cocoa growing regions.

The government maintained its farm gate price for the 2021/22 mid-crop at the same level announced for the main crop at GH¢10,560 per tonne4.

How did cocoa futures prices develop?

Amid global economic uncertainties, cocoa prices have virtually not witnessed any significant price movements, says the ICCO. The ICCO average monthly prices for March 2021 and March 2022 were virtually at par at US$2,462 per tonne and US$2,461 per tonne respectively.

Figure 4 shows the price movements of the first and second positions on the London and New York futures markets respectively at the London closing time in March 2022, while Figure 5 presents similar information for the previous year. 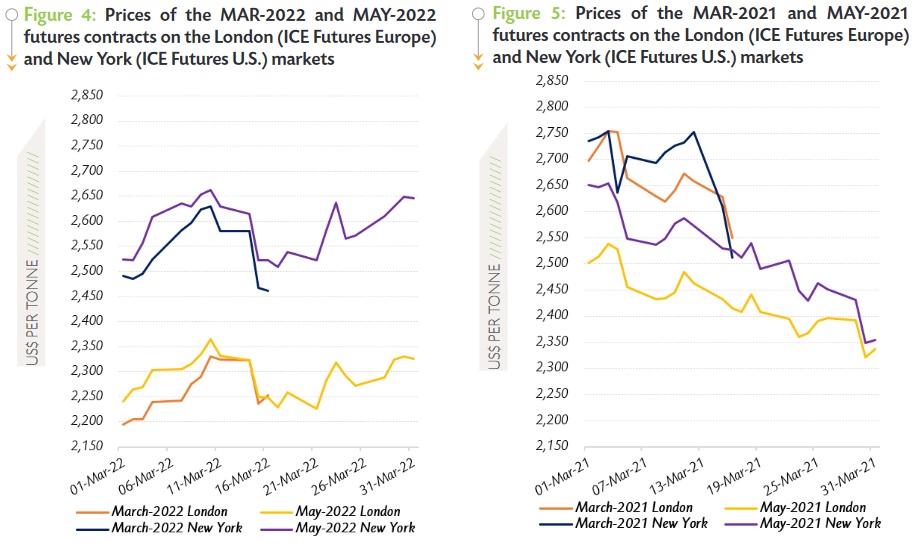 As indicated in Figure 4, the nearby contract prices followed two distinct sequences over the first half of the month under review. They rose on both sides of the Atlantic to reach their highest settlement values of the month at US$2,330 per tonne in London and US$2,629 per tonne in New York on 10 March 2022.

The bullish stance on prices was supported by expectations of a supply deficit for the 2021/22 cocoa year. Thereafter, prices of the MAR-22 contract halted their ascending trend and tumbled to US$2,252 per tonne in London and US$2,461 per tonne in New York on the maturity date (16 March 2022) of the said contract.

Concerns that the Russia-Ukraine military conflict could reduce travel across Western Europe and thereby negatively impact volumes of chocolate sales at airports, which are amongst the major locations for chocolate sales, took a toll on cocoa futures prices.