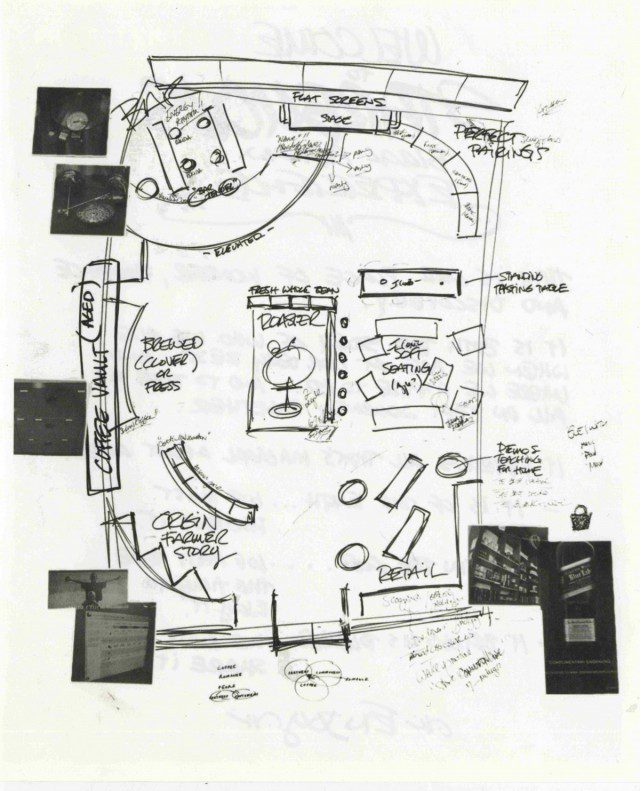 Starbucks chief executive Howard Schultz has a deep interest in social issues, as this new Forbes cover story attests. But he’s just as eager to expound on coffee. During one of our interviews, he shared the surprisingly intricate story of how Starbucks’ most lavish facility, the Roastery (in the PICTURE Roastery concept), came into being.

“I wrote the brief for the Roastery nine or nine-and-a-half years ago, with one line that said: ‘We need to build the Willy Wonka of coffee,’” Schultz told me. Right from the start, he wanted to combine a high-end cafe, a working industrial plant that turned raw beans into packaged coffee for customers — and a small store. But making that dream come alive turned out to be tricky.

As this 2008 sketch shows, it took a while for Starbucks to make everything click. Initial sketches called for a hefty roaster to be in the middle of the building, encircled by everything from a bar to a soft-seating area.

That concept made some unrealistic assumptions about the ways that conveyor belts, piping and foot traffic would interact.

So when the first such facility finally did get built in Seattle, the actual roaster had been moved closer to a side wall, so that passersby could get a good look at its operations without feeling squeezed.

Overall, most of Schultz’s initial vision did come to pass, including a shopping area just to the right of the entrance, where visitors could buy coffee makers, other paraphernalia and bags of single-origin, high-end beans.

Among the late additions, a rattling overhead display board that provides coffee-related announcements. Its appearance — and sound — closely matches the way a traditional European train station lets you know that the 13:04 to Zurich is now boarding on Track 7.

Nestlé and Starbucks announce launch of Non-Dairy Creamers in the US b...