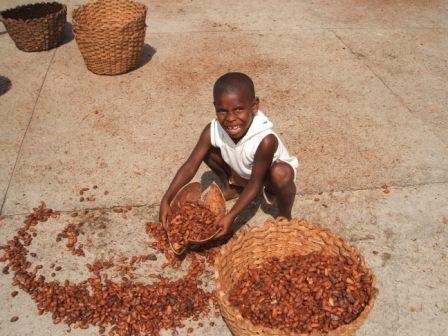 MILAN — An increase in cocoa price by 2.8 percent could potentially eliminate the very worst forms of child labor from cocoa production in Ghana, according to a new economic model described in a study published June 5, 2019 in the open-access journal PLOS ONE by Jeff Luckstead and Lawton L. Nalley from the University of Arkansas, USA, and Francis Tsiboe from Kansas State University, USA.

Current Ghanaian law prohibits child labor; however, traditionally, children begin to learn and use cocoa farming skills in childhood – and in 2015, just under 40 percent of children working in the cocoa sector were involved in hazardous work.

Many cocoa households live in poverty on small-plot farms and need children to work in order to earn enough to survive. As such, current child labor laws are rarely enforced. Complicating matters, child labor in cocoa production is not just a symptom of poverty but also a contributing factor, as children often give up a formal education to work in cocoa orchards.

In this study, the authors used data drawn from a literature review of agricultural policy to develop an economic model for the necessary price increase of cocoa in order to eliminate different types of child labor at Ghanian cocoa household-farms. The model assumes that the price premium mitigates the negative financial effects for the household of eliminating child labor, maintaining current living standards.

Eliminating all forms of child labor, including light work, would require a 46.96 percent premium. However, the study did not investigate if consumers would be willing to pay these suggested premiums. The authors also noted that if cocoa farmers were not compensated in this way for eliminating forms of child labor, farm welfare and net income would decline.

Using this forecast, the authors propose that the well-established Ghanaian Cocoa Marketing Board encourage cocoa farmers to eliminate regular and hazardous child labor with an 11.81 percent price premium as compensation. This cost might be recouped by charging a premium for cocoa marketed as child labor-free.

Cargill leverages technology to improve transparency in the cocoa sect...