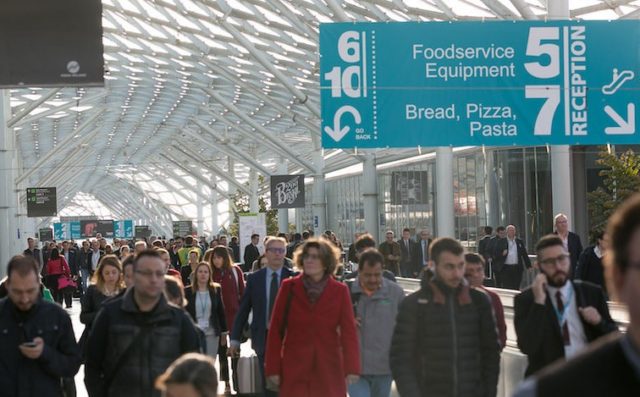 It’s all about keeping up the momentum: that, in a nutshell, is the philosophy of HostMilano, the leading hospitality fair held every two years.

Fiera Milano has been hard at work investigating new trends and carrying out market research ever since the end of HostMilano 2017, which was an exceptional edition in terms of visitor numbers and the level of satisfaction among companies and buyers taking part.

Now it has planned a series of workshops, events and sector fairs to promote itself even more and to gain a foothold in the most consolidated and most promising markets.

14 months ahead of the fair, preparations are well under way for the launch of the forty-first edition, which will be held at Milan’s Rho fairgrounds from 18 to 22 October 2019.

By late July, 975 firms had already confirmed their participation. Among them, 46% will be coming from outside Italy, from over 40 different countries, bringing confirmation of the truly global resonance of HostMilano.

Parallel to this, scouting activities are continuing which, thanks also to close collaboration with ICE Agenzia, will bring to Host 2019 over 1,500 buyers from 80 countries, with a high turnover rate: 80%. Great attention will be focused on markets like the USA, Canada, the Middle East, UAE, China and Russia.

So all eyes will be focused on HostMilano, not least of all because the fair’s macro-areas are representative of an extremely dynamic section of Italian industry and of the international economy.

This is borne out by figures supplied by the Host Monitoring Body based on Ulisse system data: in 2017 world trade in Machinery, Equipment and Accessories for Professional Catering was worth 52.8 billion euros, with average annual growth rates of 6.1% between 2009 and 2017.

Further annual increases of 3.8% are forecast between now and 2021

In Ice-Cream & Pastry, a market which is worth approximately 2.4 billion euros worldwide, Italy is way out in front in exports, with a value of 664 million euros and a share of 27.8%. Other countries trail a long way behind: Germany comes second (203 million euros, 8.5%) and the Netherlands third (200 million euros, 8.4%).

In this segment an annual growth rate of +3.2% between now and 2020 is forecast.  In the Coffee, Coffee-Making Equipment and Vending Machines grouping, global trade is worth a total of 173 billion euros.

Between 2018 and 2021 it will continue to grow at a rate of 3.5% a year. With 6.9 billion euros by value and a market share of 4.2%, Italy is the fourth largest exporting country, confirmation of its greater focus on high-end articles rather than series production

Join Re:co Fellows Talks online for free today to get a taste of upcom...

Re:co gathers the most influencial thinkers in the coffee industry