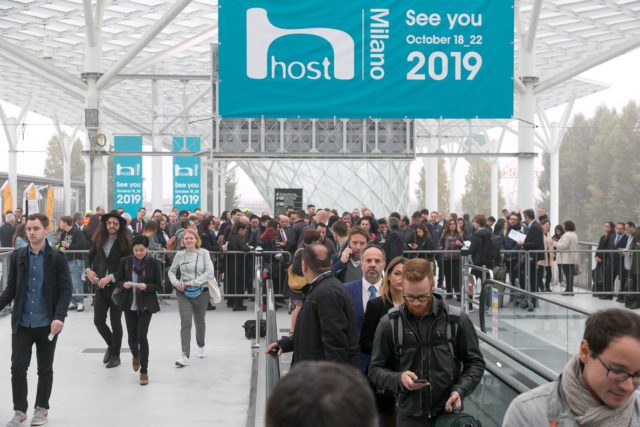 MILAN, Italy  – With just under 15 months to go before the ribbon is cut, preparations have already been underway for some time for HostMilano, the leading professional hospitality event organised by Fiera Milano. And now they are getting into top gear, ready to launch this 41th edition of the event, offering even more business opportunities, at fieramilano October 18 through 22, 2019.

975companies have already confirmed their participation, 46% of which come from more than 40 foreign countries; the best  represented countries include Germany (16% of all international exhibitors), Spain (14%),France (9%), theUS (8.2%) and the UK (6%). In terms of macro-areas, Professional Catering – Bread, Pizza and Pasta accounts for 48% of all exhibitors, while Bar, Coffee Machines, Vending Machines – Ice Cream, Pastry Shops – Coffee and Tea represents 23% and Tableware, Furnishings & Technology accounts for the remaining 18%.

In parallel, scouting continues under a partnership with ITA Agency, bringing more than 1,500 buyers from 80 different countries to Host 2019, with a high turnover rate, 80%, and a focus on particularly interesting markets such as the US, Canada, the Middle East, theUAE, China and Russia.

Fiera Milano will also be participating in a series of workshops, events and trade fairs to present the event and keep an eye on the markets that appear to be the most consolidated and promising for HostMilano. Significant stops on the promotional tour include, in addition to a number of Italian cities, Mexico City, Dubai, Lima, Munich, Moscow, and the US cities of  Boston, Chicago, Las Vegas and  Orlando.

Three macro-areas will represent key sectors of the economy

On the whole, there will be more opportunities for complementarity and exchange among the three related sectors thanks to constant refinement of the concept of organisation by macro-areas, one of the event’s major strong points, reflecting three dynamic sectors of the Italian and international economy.

In detail, world trade in the Vending sector is worth 870.6 million euro and is expected to growth 2.1% between now and 2021. Italy is well ahead of the pack in this sector, with exports worth 292.5 million euro and a market share of about 33.6%.

Lastly, world trade in the Home Furnishings-Tableware sector was worth 165.8 billion euro in 2017 and grew at an annual rate of 5.3% in the years 2009-2017. It will continue to grow between 2018 and 2021, registering a rate of +3.5% per year. Italy is the world’s fourth-largest exporter, with a value of 6.9 billion euro and a market share of 4.2%, confirming a vocation targeting the high end of the market rather than mass production.

The most recent figures from ANIMA, the industrial association representing the mechanical industry, which includes Assofoodtec, a pole for manufacturers of machinery and equipment for food and hospitality, confirm the positive trend in the year 2018. Production (+2.7%), exports (+2.9%) and investment (+8.2%) are all growing. The value of production is expected to reach 48.74 billion euro this year, while exports will be worth 29.65 billion. The USA is the top export market, growing another 6.7% in 2017. Italy’s exports to North America are worth 3.18 billion euro. China is growing at double-digit rates and was up 19.6% last year to pass the one billion euro milestone, while Russia is also on the upswing, with a spectacular growth rate of +24.8% in 2017, up to 895 million euro. Investment was particularly strong in the area of food technologies in 2018, growing at  rate of more than 7% in the year.

The calendar of events is already packed

Events will be featured on the menu at the upcoming edition of HostMilano, with a packed programme of at least 500 workshops, presentations of figures and studies, tastings, educational initiatives and thrilling contests; the fair becomes a multisensorial experience thanks to presentations at corporate stands and cooking shows by award-winning chefs, the amazing creations of pastry chefs and cake designers and performances by top baristas and bartenders.

The focus will be on a partnership with POLI.design for the identification and promotion of innovation in products, services and formats; SMART Label will be back under a partnership with ADI – Associazione per il Disegno Industriale, revealing and confirming the trade’s ability to continue renewing its range: 497 candidacies collected over the past three editions, 156 companies awarded the SMART Label, more than 20 special recognitions with the Innovation SMART Label, and the same number of products marking significant milestones in the sectors represented.

The selection process has begun for the finalists who will participate in the 2019 edition of the FIPGC Cake Designers World Championships and the FIPGC World Trophy of Pastry, Ice Cream and Chocolate organised by the International Federation of Pastry, Ice Cream and Chocolate. These championships, held every two years, will for the third time be held during HostMilano, on October 19 and 20 2019 and October 21 and 22, 2019, respectively. This year’s fascinating theme for both championships is Art and Tradition of your Nation: a celebration of different flavours and colours in which each national team brings different flavours and ingredients to the competition, reinterpreting their local traditions in a modern way. Dozens of other events are being planned, and details will be announced in the months to come.