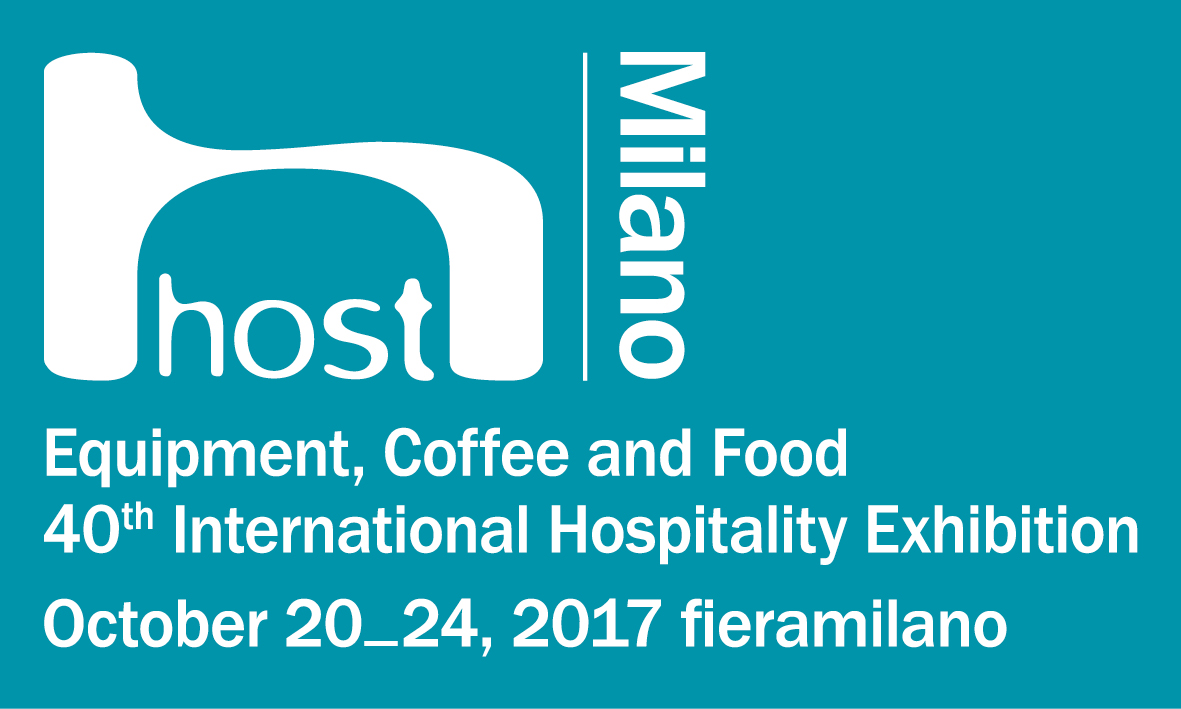 MILAN, Italy – Exactly eleven months from the ribbon cutting, HostMilano today wants to celebrate its 40th edition with the official kick-off toward Host 2017,to take place at fieramilano from Friday, 20 October to Tuesday, 24 October next year.

This important milestone highlights how much of a key role the show has on the Equipment, Coffee and Food landscape, and its importance is backed up by the numbers: 1,286 companies have already confirmed, 42% of these come from abroad, from 47 countries.

But Host 2017 is not resting on its laurels. For the official launch, it has announced many initiatives meant to further increase the number of exhibitors as well as buyers, visitors and journalists.

As of today, the international  exhibitors are more than 500 and the show is ready to fill the remaining space in the next few months, putting an additional focus on the target areas of this edition – the U.S., Canada and the Middle East. This is why there are additional initiatives planned to attract visitors, via agreements with preeminent local associations as well.

There will be  more than 1,500 hosted buyers, and, thanks to increased investment in targeting select buyers and greater collaboration with ITA – the Italian Trade Agency, there are to be many new names and an ever more complete technological mix.

Finally, when it comes to media, there is to be a dedicated campaign worth more than 2 million euros that is to also include visibility in the most important international publications, bringing more than 1,000 international journalists – including 100 correspondents that will visit Milan and Italy as well – to Host 2017.

Anticipation is growing abroad. The U.S. is at the centre of growth

The selection of exhibiting countries is ever more global, and, this year, it is to include four new additions: in addition to Serbia and Liechtenstein from Europe, Egypt and South Africa stand out on the future African market: according to UN estimates, in the next few years, the continent’s GDP will increase by more than 5% per year while energy requirements are growing by 38%, which is an indicator of the great increase in terms of industrial activities and energy consumption.

Among the “top ten” of countries most represented at the show, there’s Germany with 80 companies (+40%, there were 57 in the same period in 2014) followed by Spain, France, the United States and a selection of other countries, including, from Europe, the United Kingdom, Greece, Switzerland, the Netherlands, Portugal, Austria, Sweden, and Turkey.

But the United States is truly showing amazing growth (83%), present at the show with 43 companies (compared to 24 in the same period in 2014), 8 of which will be at the fair for the first time.

This trend has remained constant during the latest editions, with many companies returning thanks as well to the agreement with the Commercial Service of the U.S. Department of Commerce, which has offered its official certification.

At HostMilano, American exhibitors find the most important port of access to the EMEA market as well as a unique way to get in touch with the Made in Italy market (in the city that most represents it), a benchmark for the industry, and to see innovations and trends in advance.

From the U.S., these include FEDA –Foodservice Equipment Distributors Association – with 255 distributors that generate 75% of sales for Ho.Re.Ca machines and equipment – and NEWH – The Hospitality Industry Network, which includes 5,600 members, such as interior designers, architectural firms and contract manufacturers.

From Canada, agreements have been made with Restaurants Canada, the most important association in this industry with more than 30,000 members, OCSA – Ontario Convenience Stores Association, which represents more than 7,500 convenience stores, making for a particularly dynamic channel and WCSA – Western Canada’s Convenience Store Industry, two associations that together include about 13,000 convenience stores, the distribution channel in expansion in North America.

While hybridization among various formats for eating out is a phenomenon that we’ve been seeing for a while, there are two major trends from the last few years.

On one hand, as a response to a consumer who is ever more mobile and demanding,  there’s a growing pervasiveness of quality food and beverage outside the traditional realm – in retail and all the way to “non-places” like airports and train stations.

These areas are being transformed into “plazas” that mix shopping and food and drink in environments that place an emphasis on refined design. On the other hand, the key players in the industry are ever more professional.

They are becoming experts in quality ingredients, “mixologists” of different culinary traditions and “archaeologists” of traditional local flavours.

The expertise that consumers already attribute to chefs today is also being recognized in master pastry chefs and gelato makers. There is some overlap among these three figures, and, at times, their skills blend together.

Host 2017is to place special attention on these three categories, and not just with activities meant to increase participation.

There is also to be an innovative training programme called Obiettivo Apprendistato (Objective Apprenticeship).

With this programme, HostMilano, along with APCI – the Professional Association for Italian Chefs – aims to help aspiring chefs and masters of tomorrow – young people who are attending hospitality schools – to enter into the work world with greater qualifications, via a professional path that involves 100 schools and at least 1,000 final-year students.

The most talented young people will be chosen for apprenticeships in the most prestigious kitchens.

Serving up an event that includes competitions, courses and cooking demonstrations

Professional visitors – in 2015, there were 150,968 from 172 countries – won’t just find business opportunities at the show. There are also to be many training sessions and high-profile events.

Some of these standout events include the finals of the Cake Designers World Championship and the World Trophy of Pastry, Ice Cream and Chocolate in collaboration with FIPGC –  International Pastry, Chocolate and Gelato Federation.

In terms of professional food service, CHIC – Charming Italian Chef will focus on sustainability in all phases of the supply chain in the restaurant world. Identità Future is returning in collaboration with Identità Golose. Finally, the European Pizza Championship organized by Pizza e Pasta Italiana magazine will be held.

At SIC – Coffee and Bars, large events and important demonstrations will be held by the most important industry associations: Wce, Scae, Altoga and Fipe. Finally, the best bartenders will showcase their skills during events held by Mixer.

A large focus will be placed on trends with Futurbar Green, conceived by Comufficio, and Breakfeast – Non solo prima colazione (Not just breakfast), from Massimo Mussapi.

In 2017, the two competitions organized in collaboration with POLI.design – a consortium at Milan’s Polytechnic University – will return.

There’s SmartLabel, the label given to products that stand out for their use of innovation in professional hospitality. Then there’s the HOSThinking design award, whichis now in its third edition.

With the title 10 Designers for 100 Products, young designers will be called upon to develop their projects “live” during the days of the show.

The 10 products judged as being the most innovative will be manufactured.

The top event for a growing industry

With its complete range of offerings, Host 2017 has established itself as the event par excellence for all of the key players – from Italy and abroad – in a continuously growing industry.

In Italy, for 2016,TradeLab estimates an increase of 2% in eating outside the home, for a value of 77 billion euros, making it the third largest market in Europe after the UK and Spain, with the European market worth 504 billion overall.

Sales in the United States are quite impressive, with the eating-out market worth 698.3 billion euros (source: National Restaurant Association; to put it into perspective, that is more than one-third of the entire Italian GDP).

Therefore, the opportunities for further growth are immense for Italian food equipment. Italy is already a leader, with a production value for 2016 estimated (by ANIMA-Assofoodtec) to be 5,266.50 million euros, 3,515.80 million of which come from exports.

Professionals from Italy and abroad will find Host 2017 to be the most effective system for making the absolute most of these opportunities thanks to a unique layout concept that brings together the vertical specialization of the various dedicated areas with the similarities that tie the entire industry together.

The three macro-areas are: Food Service Equipment – Bread-Pizza-Pasta; SIC with Coffee/Tea and Bar, Coffee Machines and Vending, and Gelato/Pastry; Furnishings and Tableware. These areas are made all the more complete with an unparalleled programme of events where experts and key players will share case histories and their know-how.

Updated information on the show is available here: www.host.fieramilano.it