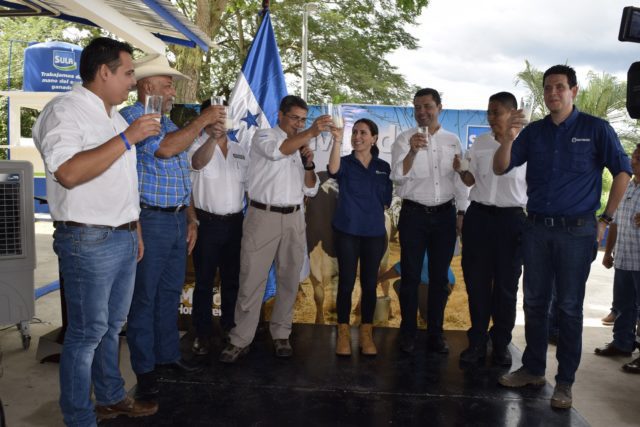 TEGUCIGALPA, Honduras – For Lacthosa it is very important to participate in the purchase of more economic milk options in Honduras to be able to export powdered milk. Lacthosa invested in its first Mega Crel (milk recollection center) in order to help aid the excedent production in the Olancho area.

This investment exceeded a budget of $400,000. The CREL has the capacity to buy 100,000 liters a day, investing in dairy farmers and purchase of milk more than $10 millon a year in this department alone.

The event was also the place where representatives of Dairy Farmers in Honduras associations like National Federation of Farmers and Cattle Ranchers of Honduras (FENAGH) and Honduran Chamber of Milk (CAHLE) sign signed an agreement to solve all the problems faced by the dairy productive sector in Honduras.

This event was witnessed by the Honduran President Juan Orlando Hernández, along with the Minister of Economic Development, Arnaldo Castillo, and several members of Lacthosa’s board of directors, Luis Jose and Elena Kafie.

The basic role of the CREL is to buy all the milk production surplus in the area during the Honduran winter season, from May to October, at a minimum purchase price of US$0.36 a liter price established in agreement between the industry and government members for the country.

This price is 70% higher than the one which is paid by the informal sector in the area during the peak production season.

“Together we are going to revitalize this country,” President Hernández told the producers, farmers, and milk processors from San Esteban. The President also stressed that agriculture credit has grown by 34 percent and the industry as such has grown by 13 percent due to these investments and important placed on the agricultural sector in Honduras.

With the opening of the CREL, many farmers in the area will benefit and boost their economy. Currently Lacthosa operates 104 milk recollection centers across the country which benefit more than 14,000 families in rural areas. “The opening of San Esteban’s MCC reflects the strong commitment that Lacthosa has in the country’s dairy industry.

As a company, we have supported all government initiatives seeking to revive this sector, which has been considered the second most important industry right after coffee. Also, we have and will continue to work hand in hand with farmers because we believe we have the quality and the capacity to open new markets and be competitive outside of Honduras” said Luis José Kafie, representative of Lacthosa.

The MCC has a laboratory to ensure the quality of milk received which will then be transferred to the plant La Fortuna which is the second largest milk dryer in Central America in order to process, package, and eventually export internationally in markets such as Taiwan.

Lacthosa’s board representative, Elena Kafie, stated that, “We want to develop the area of ​​Olancho and we are concerned about encouraging more milk producers. This agreement is trying to take Honduran milk to countries abroad and export it at a competitive price,” concluded Kafie.

Lacthosa annually purchases approximately 40 million liters of milk to more than 2,000 farmers nationwide, with whom they work in unison to strengthen the dairy and cattle sector by improving milk quality and improving their productive units.

During the event, Lacthosa also unveiled its new business unit called Sula Agro Services which focuses on providing agricultural and veterinary facilities to develop the value chain of milk suppliers. This service covers all the needs of technical, productive, and agro-food inputs management as well as support and training conducted by specialists in animal nutrition, reproduction and breeding, animal health, and management inputs on farms. Providing this service will benefit dairy farmers to be more competitive.

Also in a symbolic act, the president of the Taiwanese company Dong Jyu Group, Long Dong Lin and President Hernandez donated five automatic milking machines to exemplary dairy farmers in the area. This marked the beginning of the agro services project for Lacthosa.

A Milk Collection Center also known as CREL, is a collection center located in strategic areas that group about 30-40 dairy farmers where they carry the milk to be stored in cooling tanks and then transferred to the Lacthosa production plants. Lacthosa has established 104 CRELS in Honduras.

It is the second largest Central American company in the production and distribution of dairy products, juices and refreshing beverages. It generates more than 3,000 direct jobs and 50,000 indirect jobs, benefiting a large sector of the Honduran population. Lacthosa has presence in 4 more countries, Guatemala, El Salvador, Dominican Republic and United States. Learn more at: www.lacthosa.com.

Kodagu coffee farmers export for first time their crop to a European r...