“At the same time, we delivered organic net revenue growth in line with our expectations as we raised prices to recover higher input costs, protect profitability and ensure the health of our franchises.

“As we execute our transformation agenda in 2015, we expect to deliver modest organic revenue growth as well as solid margin expansion and strong constant-currency earnings growth.

We remain on a clear path to achieve our 2016 margin target and to drive sustainable earnings and revenue growth over the long term.

We’re continuing to execute our cost-reduction initiatives to expand margins and to make the necessary foundational investments in our brands, innovation platforms, routes to market and supply chain, so we’re well-positioned to accelerate revenue growth as consumer demand improves.”

The decline in volume/mix was largely due to price elasticity, a slow response by competitors to higher input costs and the impact of significant price-related customer disruptions that are largely resolved. 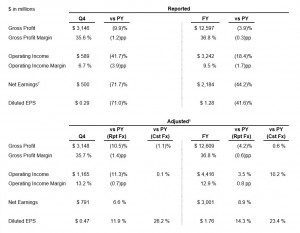 The company continued to reduce overheads in all regions. In addition, the company maintained working media support while lowering overall advertising and consumer expense by driving efficiencies through consolidating providers, reducing non-working costs and shifting spending to lower-cost, digital outlets.

For the full year, Free Cash Flow excluding items1 was $2.5 billion, driven by earnings growth and working capital improvement. The company returned $2.9 billion to shareholders through $1.9 billion of share repurchases and $1 billion in dividends.

In 2015, the company expects Organic Net Revenue growth of at least 2 percent, after accounting for the company’s strategic decision to exit certain lower-margin revenue.

Adjusted Operating Income margin is expected to be approximately 14 percent for the year, with margin expansion accelerating in the second half, driven by the timing of cost-reduction programs. Adjusted EPS is expected to increase at a double-digit rate on a constant-currency basis.

With approximately 80 percent of revenues in currencies not tied to the strengthening U.S. dollar, the company estimates foreign exchange translation to reduce 2015 net revenue growth by approximately 11 percentage points and Adjusted EPS by approximately $0.308.

Mondelez International will host a conference call for investors with accompanying slides to review its results at 10 a.m. ET today. Investors and analysts may participate via phone by calling

1-800-322-9079 from the United States and 1-973-582-2717 from other locations. Access to a live audio webcast with accompanying slides and a replay of the event will be available at www.mondelezinternational.com/Investor.

The company will be live tweeting from the event at www.twitter.com/MDLZ.

3.In August 2013, the company recorded a $363 million favorable impact related to the resolution of a Cadbury acquisition tax indemnification, including $336 million in selling, general and administrative expenses and $49 million in interest and other expense, net partially offset by $22 million of tax expense.

4.On December 13, 2013, the independent arbitrator in the dispute between Kraft Foods Group and Starbucks Coffee Company issued a decision and Final Award that Starbucks must pay $2.8 billion in total cash compensation for its unilateral termination of the companies’ license and supply agreement. The company recorded a gain, net of taxes, of $1.6 billion during the fourth quarter of 2013.

5.Emerging markets consist of the Latin America and Eastern Europe, Middle East and Africa regions in their entirety; the Asia Pacific region, excluding Australia, New Zealand and Japan; and the following countries from the Europe region: Poland, Czech & Slovak Republics, Hungary, Bulgaria, Romania, the Baltics and the East Adriatic countries.

6.Developed markets include the entire North America region, the Europe region excluding the countries included in the emerging markets definition, and Australia, New Zealand and Japan from the Asia Pacific region.

8.Currency estimate is based on spot rates as of the close of business on January 30, 2015.