TURIN, Italy — Giuseppe Lavazza, Group Vice President and Honorary Consul of the Republic of Colombia in Turin, alongside Juan Manuel Santos, President of the Republic of Colombia and winner of the 2016 Nobel Peace Prize, last week visited local communities in the municipality of Mesetas in the Meta department, at the foot of the Cordillera Oriental mountain range, a highly symbolic area for the country’s rebirth after the armed conflict, where for years no coffee had been grown.

Since 2015, in this area, Lavazza has been implementing its global ¡Tierra! program through the nonprofit Giuseppe e Pericle Lavazza Foundation, in partnership with local institutions, NGOs and businesses, addressing the needs for entrepreneurship development, agricultural and technological training and infrastructure improvements.

The ultimate goal is to improve the social and environmental conditions, as well as the production techniques, of communities of coffee producers and their families.

Since 2013, with the end of the conflict with the FARC, farming families received land from the government that had previously been used for illegal crops, with the aim of returning plantations to their former glory.

During the first phase of the project developed by the Lavazza Foundation, between 2015 and 2017, some important results were achieved: over one hundred Colombian farming families were able to restore the coffee plantations to their original state after the period of guerilla warfare, during which they had not been tended for years.

As a result, over the course of a short time, the area has already started producing high quality coffee for Lavazza’s ¡Tierra! Colombia product, sourced from 100% sustainable agriculture certified by the Rainforest Alliance NGO, the international organization that promotes the introduction of more sustainable agricultural practices to protect the environment and guarantee dignified living conditions for growers.

During the second phase, launched last year and still underway, the Foundation set itself the goal of providing coffee growers with tools to manage and minimize the effects of climate change, but also to relaunch the regional economy and reintegrate growers’ families in areas affected in recent decades by a series of critical and deep-rooted social issues.

The meeting with local communities took place against this context, endorsing the implementation of the “Technology Transformation” plan promoted and supported by the Lavazza Foundation and realized through an international partnership embracing Colombian institutions (the President’s Office and the Telecommunications Ministry, ANE), Carcafé, Microsoft, SAP and the project managers ALOpartners and nonprofit Makaia.

“I am honored to be part of this visit with President Santos. Colombia, as the world’s third-ranking coffee exporter, represents a great importance for Lavazza, demonstrated by the longstanding relationship we have established with the Country, from which we import some of the most prized and characteristic coffees in the brand’s storied blends and where we implement some of our pioneering sustainable development projects.” Said Giuseppe Lavazza, Group Vice President.

“According to our strategic vision, deeper integration of economic growth, social inclusion and environmental protection are the only paradigm able to create shared value and protect the world we live in.” 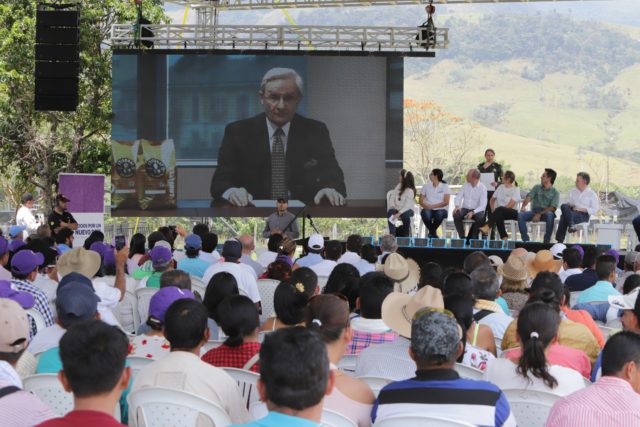 During the day, the delegation connected with company headquarters in Turin for a video conference to exchange greetings with Chairman Alberto Lavazza and Vice Chairman Marco Lavazza.

Alberto Lavazza thanked President Santos, but also the coffee-growers, “the first people who work with coffee, who I thank for the passion, commitment and care they show towards the raw material that has made us a successful company”.

Marco Lavazza stressed the company’s commitment to contributing, through the Foundation, to the well-being and development of Colombia, with agriculture and technology sustainability projects that also support the peace process underway.

After the joint visit by Giuseppe Lavazza and President Juan Manuel Santos, the Lavazza Foundation is already looking to the future with the partners who have enabled the achievement of such important results in such a short space of time.

The objectives are ambitious: to extend the scope of action to other areas in the Meta department and to increase the number of schools, farms, other structures and families to benefit from the project’s three components, or in other words internet access and connectivity, cultural and technological appropriation, and the empowerment of producers. 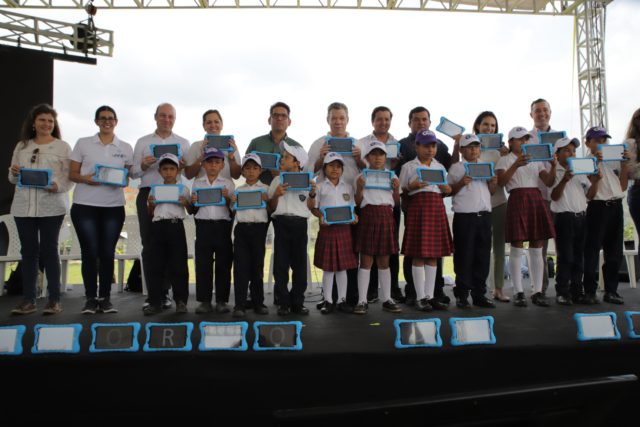 The “Technology Transformation” project is split into stages, involving first the provision of connectivity in the area, followed by technology training, and finally the delivery of telemedicine services for local inhabitants.

Connectivity has been brought to coffee farms and schools in the Meta department by using TV White Space (TVWS) technology that exploits the so-called “white space” in the TV signal spectrum, consisting of unused frequencies.

To date, 65 people (32 coffee producers and 33 teachers) have taken part in the first training courses on “Technology Appropriation” and “Technology Applied to Farm Management,” receiving certificates. In addition, about 100 people have been given the chance to learn online the information they need for both work and study.

Today, using digital tools assimilated during the courses, the project aims to have a positive impact on coffee production, studying the best technology scenarios with the aim of implementing precision farming systems, digital georeferencing, and data recovery and management.

Finally, exploiting the connectivity established, the University of Antioquia has introduced several tele-diagnostic and tele-consultation functions, with the aim of facilitating access to medical care and offering access to specialist remote medical services, in the areas, for example, of maternity and internal medicine.

The result is a community empowered by the development of new technology that brings knowledge, precision farming skills, and access to healthcare and diagnostic services through telemedicine, possibilities that were unthinkable only two years ago.

This small but innovative program delivers high profile impact and visibility, so much so that it is regarded today by the Colombian institutions as a pioneering project, one that public and private institutions have taken as a model to replicate in other areas of the country.

Cropster launches shipsbeans, a simple solution to get your coffee onl...