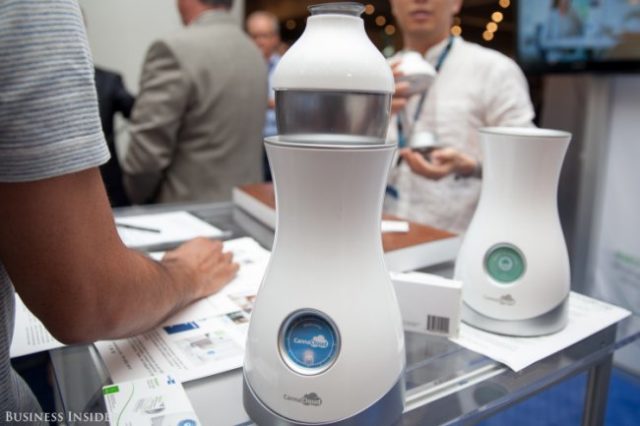 What do the coffee business and the cannabis business have in common? As it turns out, it’s more than people might expect.

The CannaCloud vaporizer is billed as the “Keurig of Cannabis” — it’s a device that heats marijuana to a specific temperature without burning the plant — because it really is just like its coffee-maker namesake.

It employs a similar pod-based technology that helped grow Keurig into the multi-billion dollar coffee empire that it is today.

The CannaCloud was even designed by the same firm that created the Keurig, Dave Manly, the chairman of CannaKorp, told Business Insider. (CannaKorp is the company that builds the CannaCloud).
Manly is also a former Keurig executive and was one of the prime architects of Keurig’s astounding growth. He joined Keurig in 2002 when it was doing only $25 million in revenue, after a stint at Procter & Gamble.

He guesses that he was probably the 25th employee at Keurig, and by the time he left, the company had grown immensely — to over $5 billion in revenue.

He ended up as the head of “innovation” at Keurig before he semi-retired in 2014 after a successful, 13-year stint at the company. And that’s when CannaKorp came calling.

“They were really intrigued about finding a Keurig guy because their whole idea was the ‘Keurig of Cannabis,'” Manly said. “I hooked up with them as a consultant, and then, about a year later, I came on board as chairman of the company.”

Initially only wanting to work as a part-time consultant, Manly came on as the company’s leader when it came time to raise some serious cash.

“It made sense for me to come on as chairman when we were raising our seed round,” Manly said. “It helped with investors and the media to say they had a former Keurig executive with my background and senior level executive experience.”

When Manly first moved over to CannaKorp full-time, he also brought a few friends from Keurig along.
“Our current CTO is a former Keurig executive who developed all the Keurig coffee-makers, and we have another executive who was in charge of packaging at the company. It was very synergistic,” Manly said.

In that first seed round, CannaKorp oversubscribed its original goal by 60%. It ended up with just under $1.6 million in startup funds mostly raised from family and friends of executives, as well as other interested people in their network.

“At Keurig, the concept was that you could get a great cup of coffee with no mess, and no clean-up,” Manly said.

He says that value proposition is what made Keurig a $5 billion dollar company — and he’s now trying to do the same thing with the CannaCloud.

As Manly explains it, right now, you can go into a dispensary and buy the raw form of the cannabis strain you want. Then, you have to transport it home, grind it, and roll it into a joint, or pack the raw flower into a vaporizer or a bong. It’s messy, and it’s not convenient for consumers.

With the CannaCloud, that’s no longer a problem. The cannabis comes in pre-packed pods, just like Keurig coffee K-cups. The consumer can simply load their preferred cannabis strain, and puff away, Manly said. There’s no mess, and no hassle.

“It’s a very similar consumer benefit to the Keurig,” Manly said. “We think our value proposition at CannaKorp works for everybody.”

Manly expects the CannaCloud to hit the market in November. They’re planning on rolling out in Colorado and Washington first, where both recreational and medicinal marijuana are legal, and then expanding to California.

Right now, there are prototype CannaClouds available for show, and they’re in the middle of manufacturing the first batch of product in China.

By 2017, if all goes according to plan, Manly said that the CannaCloud will be available in “five or six,” states.
But to get there, CannaKorp needs to raise a series A — a first big round of venture capital — to the tune of $4 million to go to market, Manly said.

CannaKorp partnered with a firm based in Illinois, Singularity Capital, to assist with their financing. Like other cannabis startups, they’re mostly hitting up high-net worth individuals and family offices who want to jump into the cannabis industry.

Many cannabis startups have had trouble getting financing from institutional investors, like banks — as marijuana is still a Schedule 1 substance at the federal level — but CannaKorp doesn’t actually deal with the cannabis plant itself, Manly said.

“We’re licensing our technology, and we’re never going to touch marijuana ourselves,” says Manly. “So there’s much less risk to investors.”
Manly said that he sees the CannaCloud going beyond dispensaries, and into pharmacies.