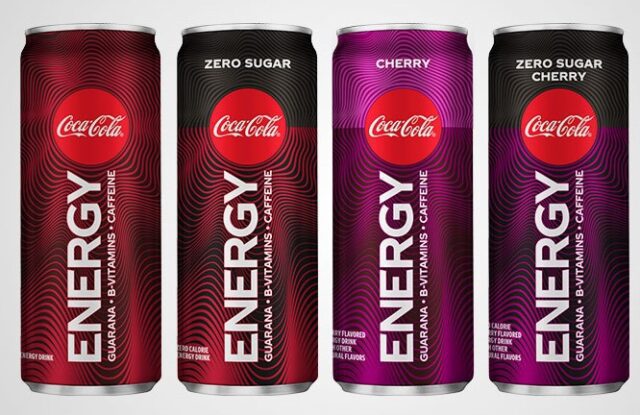 MILAN – Coca-Cola hopes to bring new fans into the energy drink category next year with the U.S. launch of Coca-Cola Energy, an approachable and appealing option offering the kick people want with the Coke taste they love.

Coca-Cola Energy, Coca-Cola Energy Cherry – a flavor available exclusively in the U.S. – and their zero-calorie counterparts will be available nationwide in 12-oz. sleek cans starting in January 2020. All four varieties include 114 mg of caffeine per 12-oz. serving (roughly the equivalent of a 12-oz. cup of drip coffee), guarana extracts and B-vitamins.

Coca-Cola North America unveiled the first-ever energy drink under the Coke brand alongside several other beverage innovations last week at the National Association of Convenience Stores (NACS) expo in Atlanta. Convenience retail is the primary channel for the immediate consumption (IC)-driven energy drink category, making the tradeshow a logical launching pad for the new beverage.

The rollout supports Coke’s ongoing efforts to deliver more beverage options that meet changing preferences, lifestyles and tastes. It’s also an example of the company’s commitment to move quickly, take intelligent risks to bring more drinks to the shelf, and “lift and shift” innovations around the world.

Nestlé Philippines increases purchase of local coffee through the Nesc...