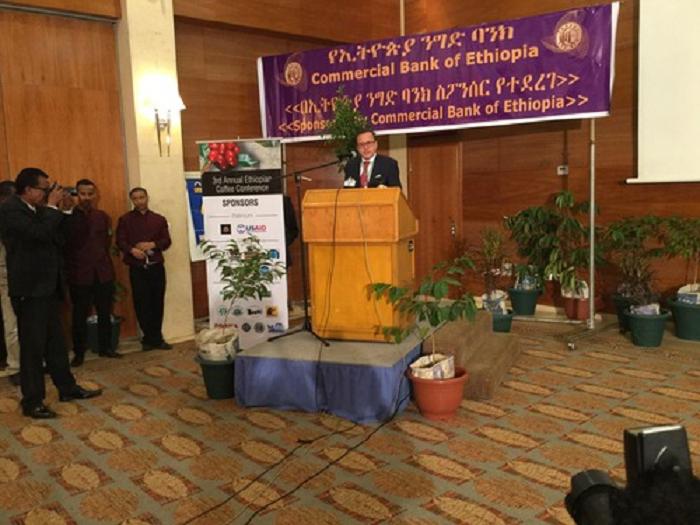 The Executive Director of the ICO, Mr Robério Oliveira Silva, is presently on an official visit to Ethiopia. Yesterday morning he delivered a speech at the 3rd Annual Ethiopian Coffee Conference, opened by His Excellency Dr Mulatu Teshome, President of Federal Democratic Republic of Ethiopia.

Among the dignitaries at the event were His Excellency Mr Kebede Channe, Trade Minister, and Mr Peter Vrooman, Deputy Charge of Mission, US Embassy in Ethiopia.

In his opening remarks, Mr Silva emphasised the importance of increasing coffee production in Africa which represented nearly 20% of global supply in 1990 but only accounts for 11% today. He added that even in absolute terms, coffee production in Africa this year is estimated at around 16.3 million bags, one hundred thousand bags less than in 1990.

Mr Silva also mentioned that the ICO’s 4th World Coffee Conference will be held in Africa for the very first time in March 2016.
He said, “It seems very appropriate to me that the ICO’s World Coffee Conference will be coming to the birthplace of coffee in order to celebrate its heritage and culture. It is my hope that the event can act as a real turning point for the coffee industry in Africa.”

The Executive Director continues his tour in Ethiopia tomorrow when he will be meeting HE Mr Yacob Yala, State Minister, among other government officials. Mr Silva will also meet with the Ethiopian Coffee Exporters to set up an organising Committee for the 4th World Coffee Conference and have preliminary discussions for the preparation of the event. He is also visiting coffee plantations to speak with coffee farmers in the area.