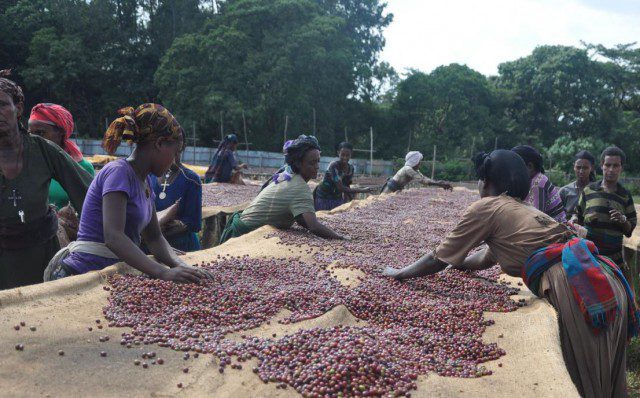 Gojjam has long been famous for its white “Teff” in Ethiopia, but now thanks to Sheik Mohammed H. Ali Al-Amoudi, owner and Chairman of MIDROC Ethiopia, it is now hoisting its business flag in the international coffee market.

One of Sheik Mohammed’s agricultural parent companies, the Ethio Agri-CEFT, is aggressively producing coffee on 340 hectares of irrigated land in its Ayehu farm in Gojam district of the Amhara Regional State and supplying to the international market as one of the brand varieties.

“I would say nothing, than expressing my appreciation for that,” Dr. Teshome expressed his satisfaction.
“Apart from its promotion of Ayehu’s coffee, we are appreciative of the Ethio Agri-CEFT coffee growing training it offered to 390 individual farmers from Amhara region and even beyond held at its farm. I myself have visited the farm and witnessed this,” the Bureau head added.

“We would also like to assure all concerned that we will further expand the production of coffee in Ayehu increasing the 340 hectares to 1000 in the short term and beyond in the long run to promote Amhara coffee and achieve the development vision of Sheik Mohammed H. Ali Al Amoudi,” Ato Essayas said.

According to the General Manager, the productivity of the Ayehu farm has been 10quintals per hectare and currently the coffee production capacity of the farm has reached 2000 quintals per annum from only 1000 quintals due to the improved coffee growing management and application of inputs.

“With the current 2015/16 Ethiopian production year our expectation is a total production of 3000 quintals and to achieve 15quintals per hectare productivity,” Ato Essayas added.

Also in the near future, the company has set to expand the coffee growing farm to 1000ha and to increase the annual production to 20,000qt with 20quintals per hectare productivity, he said.

The General Manager indicated that the USA and Germany are among the buyer countries of the Ayehu coffee.

This coffee has hints of blueberry and chocolate, with a rich, wine body, and sweet floral aromas. Many rich coffees come out of Ethiopia, and this one is full of flavors that are delightful for any coffee or wine lover.

Ethio Agri-CEFT PLC firmly believes that it has the responsibility to take care of the well-being of the workers and the natural environment.

With the use of organic and Rain Forest Alliance premiums, the company has been able to invest in housing, schooling, health centers, and clean water supplies for farmers and their families.

It has also invested a lot to improve working conditions for its employees.

Having a total area of 6,688 hectares and a favorable climate for crop production, Ayehu farm, in addition to coffee, cultivates maize, wheat, soybeans, pepper, chickpea, Mung bean, haricot beans and the like.

The farm also produces essential oils, spices such as coriander and black cumin. In an effort to maintain environmental balance the farm has started planting perennial crops such as mango, papaya and others.