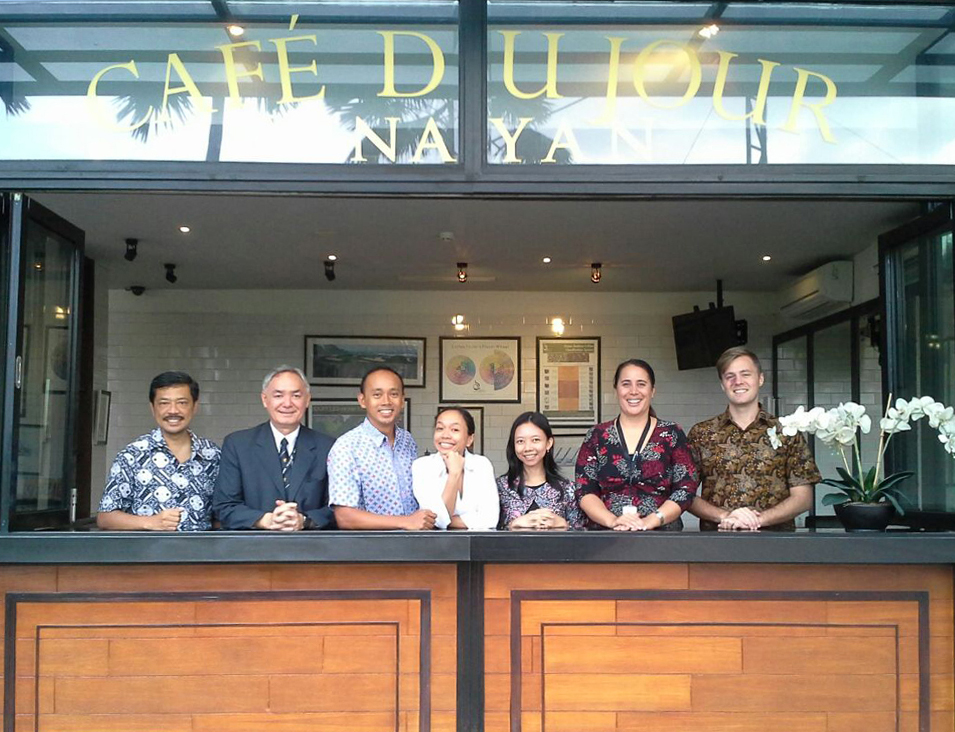 Coffee has a way of bringing people together, and it was a coffee cupping (think wine tasting but with coffee) session at the Indonesian embassy last year that brought together Indonesian coffee entrepreneur Indradi Soemardjan and Wellington-based coffee roasters Ripe.

Four months after their meeting, Ripe received their first shipment of Soemardjan’s West Java beans, and recently representatives from Ripe visited Soemmardjan in West Java to see his operation in action.

Indonesia is a significant coffee-producing nation, ranked third in the world after Brazil and Vietnam for the combined production volume of Arabica and Robusta varieties, Soemardjan says.

“But for Arabica, we are now perhaps a country with the most diverse selection, as our archipelago stretches as far as from Los Angeles to New York. The development of specialty coffee is amazing.”

Soemardjan says his visit helped his company, PT Javanero, forge trade relationships with New Zealand companies, such as Ripe, and it had influenced some of PT Javanero’s practices.

“Their respect of the environment, from the upstream to the downstream, is outstanding. Now I know that I must also bring about changes in how we do things related to keeping the rivers clean. I personally was impressed with the high trust factor among the New Zealand business communities.”

Soemardjan says New Zealand is a growing coffee market that is “very dear” to him because New Zealanders respect the natural environment and “enjoy a good cup of coffee”.

He is also trying to impart New Zealand’s food traceability systems to PT Javanero’s operation “just like how New Zealand producers maintain the traceability of wool, wine and milk products down to the individual farmer”.

Ripe Coffee Roasters owner Jason Hall and roaster Clinton Agar visited Soemardjan in West Java in June – their first such visit to one of their overseas coffee bean suppliers. Hall says during their stay Soemardjan set up meetings that had helped them establish relationships directly with the farmers in West Java.

“We share Indi’s vision of trading directly from valley to valley to ensure higher quality coffee, creating a mutual supply chain and a greater financial gain for the farmers.”

It was during the cupping session at the Indonesian Embassy in Wellington, where they first met Soemardjan, the seed was planted for the trip to West Java.

“The quality of the coffee and the opportunity to connect better with origin convinced us to travel to the beautiful countryside in Indonesia, Hall says”

Soemardjan says he served Hall and Agar other specialty coffees from Sumatra, Bali, Flores, Sulawesi and Papua, and took the opportunity to learn about Wellington’s coffee-drinking market.

“Learning from the Ripe folks about how to roast and brew for Wellington’s community, and what goes into their special coffee blend, has really opened up my eyes about how to present our West Java coffee to the world. For them, it’s not just about coffee: it is about telling the story of the specific coffee with genuine passion to allow their customers to experience what’s in the cup. I think the chemistry is right between us.”