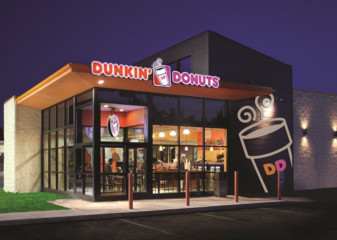 CANTON, MA, U.S. – Dunkin’ Donuts, one of the world’s leading coffee and baked goods chains, announced today that it has made significant strides in its European expansion efforts in 2015 with the opening of 55 net new restaurants with its franchisees across the region. With the new restaurants opened over the past year, Dunkin’ Donuts now has more than 220 locations across Europe.

Over the past year, the company has celebrated first restaurant openings in Denmark, Georgia, Iceland and Poland, marking the brand’s continued expansion into new European markets, while also opening additional locations in Austria, Germany, Spain, Sweden and the United Kingdom.

Additionally, a master franchise agreement was signed in September to develop 30 Dunkin’ Donuts restaurants in Switzerland.

Franchisee candidates looking to further develop the Dunkin’ Donuts brand in Europe must have deep retail or foodservice operations experience.

Groups must also have strong financial backgrounds, knowledge of their local consumers and marketplace, a proven track record of success in the restaurant industry, and a desire to develop a minimum of 20-35 Dunkin’ Donuts restaurants in their market over the next several years. Specifics and fees will vary per country and are available upon request.

“With coffee culture being such an important part of life in Iceland and across Europe, we feel that Dunkin’ Donuts’ high-quality blends of coffee and welcoming, friendly restaurant environments are a great addition for the region. We look forward to serving more guests across the country as we open additional Dunkin’ Donuts restaurants in the years ahead.”

Dunkin’ Donuts currently has more than 11,700 restaurants in 43 countries around the world, including more than 220 locations across Europe in Austria, Bulgaria, Denmark, Germany, Georgia, Iceland, Luxembourg, Russia, Spain, Sweden and the United Kingdom.