Can you imagine drones being part of our everyday life, flying around our homes and helping out with everyday tasks? Students at a Dutch university have opened the world’s first drone café, where a drone called Blue Jay acts as a waiter, in an effort to show people what they want from the future of robotics 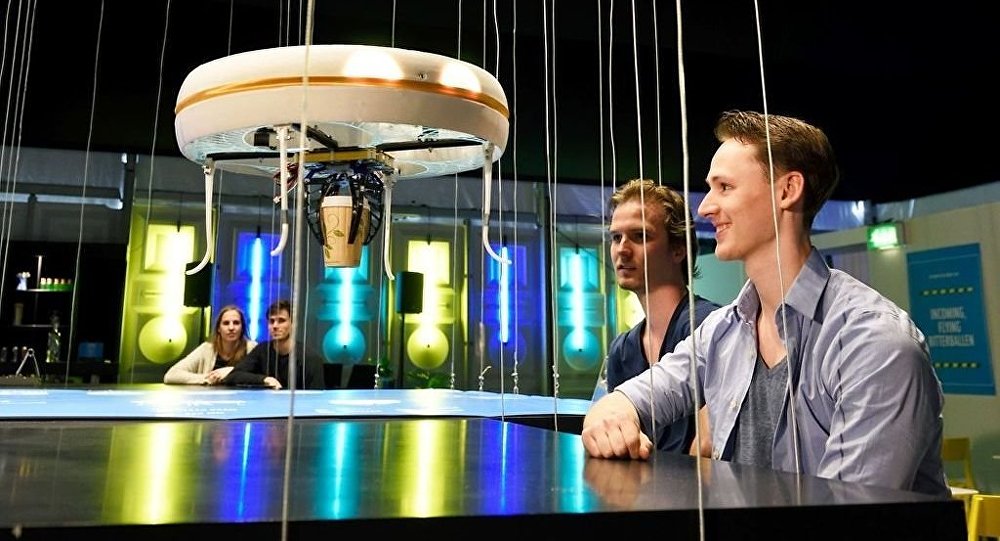 Students from the Dutch Eindhoven University of Technology have opened the world’s first drone café on their campus.

The drone, nicknamed Blue Jay, which resembles a small white flying saucer with a luminescent strip for eyes, flies to a table and hovers as it takes a client’s order, who points to the list to signal what they would like.

“The blue eyes of the first drone load” up by scanning the list to register the order, student and project leader Tessie Hartjes told AFP.

“Once it’s fully loaded, then the order is ready. And another one comes with the order in a cup in the grip.”

The cafe offers four different alcoholic and non-alcoholic cocktails, which are either bright blue or green – the same color as the drone’s “eyes.”

The drinks are picked up and carried by a set of pinchers underneath the drone, in a bid to show that these hovering robots can be used to carry out delicate missions such as delivering medicines or even helping to track down burglars.

In their video presentation, the students explain that the aim of the project was to research how one day domestic drones could be part of the human society. How a drone could become a friend.

“We discovered that a drone can be very useful indoors. Because that’s where the people are. A drone can be used for safety, it can detect intruders, but it can also be just convenient to have a drone in our house to bring you an apple,” says one of the students.

They call their first creation, Blue Jay, “an intelligent bird that lives in complex social environments and can move on its own through our physical world.

As the students were working on Blue Jay, they detected four basic principles which lie at the core of domestic drone evolution.

One: by using sensors and a closed frame, they can ensure that Blue Jay operates safely.

Two: its claw resembles a human hand because their research has shown this is the most functional tool for common daily tasks.

Three: the most difficult and uncommon: it has to be able to fly indoors, but as propellers get smaller and batteries get better, it will feel less dangerous to have a drone around the house.

The last rule – it has to be intelligent. An autonomous drone is like a trained pet, the students say. It’s eager to learn and it is fun to play with.

Once a drone gets a human owner, it will need to be taught some tricks.

The drone has cost about 2,000 euros to build and the project has been funded by the university.