In the second quarter of 2021, the Group achieved:

At June 30th, the Group’s net financial position was positive for € 217.9 million (€ 286.7 million on a like-for-like basis). In the first six months of this year, the cash flow before dividends and acquisitions was positive by € 196.2 million.

“The extraordinary results achieved in these first six months witness the solidity of the medium-term trends of our core segments and the resilience and flexibility shown by our Group and in particular by our people. Results obtained despite the critical issues that the entire industrial world is facing globally, such as the increase in freight costs and raw materials and the supply flows of some components.
The De’ Longhi Group responds to these challenges with a renewed commitment to investments in innovation, production facilities and communication and marketing activities in support of our brands and products.

The increased investments, in turn, are made possible by the safeguard of operating margins, also achieved through a careful pricing policy.

Furthermore, in the last three years, the decision to expand the budget for communication and marketing activities has been fundamental in order to seize all the opportunities that the market offers. In particular, in line with this strategy and the medium-long term plan, the second half of this year will see the Group launching an important global communication campaign in the coffee segment, which we believe will allow us to further consolidate and increase our global leadership in the sector.

For what has been said, we believe we can continue to look with positivity at the evolution of the business in the near future. For this 2021 we now see the Group’s revenues (including Capital Brands) grow at constant exchange rates at a rate in the upper end of the range previously communicated (28% – 33%) and an adjusted Ebitda improving versus last year, both in value and as a percentage of revenues. Furthermore, the consolidation of Eversys will bring about 2 percentage points of additional revenue growth and an adjusted Ebitda, as a percentage of revenues, in line with the rest of the Group. ”

¹ The consolidated results for the first half of 2021 refer to the new consolidation perimeter which also includes Capital Brands Holdings Inc. and its subsidiaries and, starting from April 1st, the Swiss group Eversys.
² The term “on a like-for-like basis” stands for at constant perimeter, i.e. excluding the consolidation of Capital Brands and Eversys.
³ The term “adjusted” means before non-recurring income / charges and the notional cost of stock option plans.

During the first half of the year, the Group consolidated and strengthened its leadership position in the Small Domestic Appliances market at an international level. The strong growth achieved, substantially in continuity between the first and second quarters, was supported by continuous investments in innovation, manufacturing excellence, communication and marketing.

These efforts have allowed the company, on the one hand, to seize the opportunities provided by the acceleration of consumption at home, and on the other hand to successfully address the complexities that emerged during the pandemic period. Thanks to the several measures implemented, including increased production efficiencies and a prudent price increase strategy, the Group will be able to mitigate to a large extent the effects deriving from the increases in some industrial cost items.

The experience gained in recent quarters has once again demonstrated the extraordinary dedication of the teams and the flexibility of the business organization, thus giving an important signal for a positive development of the business in the near future.

The Group’s scope of consolidation in the first half of 2021 has included, for the entire half year, the American group headed by Capital Brands Holdings and, starting from April 1st, the Swiss group Eversys, active in the segment of professional coffee machines and whose entire share capital was acquired by De’ Longhi on May 3, 2021.

The acquired companies contributed € 119.8 million in revenues and € 21.4 million in adjusted Ebitda in the first half of the year.

For the purpose of comparison with 2020 figures, in some cases we herein present data on a “like-for-like basis”, i.e. excluding both the above-mentioned acquired companies from the scope of consolidation.

In the six months, all main regions achieved growth in the revenues, marking a double digit performance in both the first and second quarter of the year.

On a like-for-like basis:

During the first half of 2021, on a like-for-like basis, almost all of the product segments achieved significant growth, thanks to the confirmation of the trend in the second quarter of the year. The investments in communication on the brands, together with the several activities in support of the new products launched in recent quarters, have allowed the Group to seize the numerous opportunities available on the market.

In particular, the coffee segment was favored by a significant expansion of all the main categories, with a trend in the sector that showed a growth rate above the Group average in both quarters, driven in particular by the of full-automatic machines.

The cooking and food preparation sector closed the half year with significant double-digit growth, substantially in continuity between the first and second quarters of the year. In particular, in the last few quarters, the greater attention of consumers to products related to the “home experience” has supported the expansion of the business in all main geographical areas.

Finally, the newly acquired companies Capital Brands and Eversys also contributed to the growth of the Group in the half year, thanks to the strength of their respective brands, products and structural trends in nutrition and professional coffee

With regard to the evolution of margins in the first half:

It must be also highlighted that in the half year the Group, on a like-for-like basis, increased its investment in communication and marketing activities by approximately € 50 million compared to the same period of 2020, for a total amount of € 147 million, equal to 11.2% of revenues (compared to 10.9% last year).

The net financial position as at 30.06.2021 stood at € 217.9 million, with a net cash generation of € 196.2 million in the six months, if we exclude the acquisition of the majority of share capital of the Eversys Group and the payment of dividends for € 80.8 million.

In the 12 months, the cash flow, before dividends and the acquisitions of Capital Brands and Eversys, was € 450.4 million. 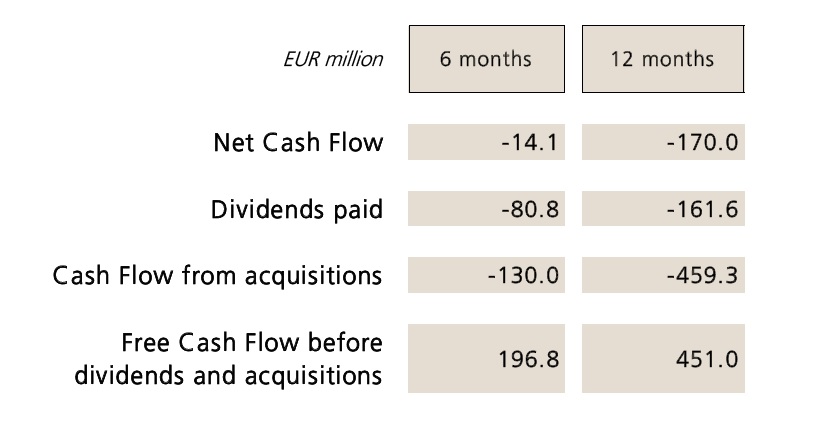 As already highlighted in the first quarter, the net working capital shows a significant improvement compared to the values of the previous year. The increase in inventories was widely offset in the twelve months by a careful credit and trade payables management , thus bringing the ratio of net working capital to revenues to 2.2%, i.e. a marked reduction compared to last year’s figure (10.6%), but more consistent with the values reached at the end of 2020.

The ratio of net operating working capital to revenues also improved, passing from 14.3% to 8% in the 12 months.

Finally, we underline that in the half year capital expenditures were € 61.4 million, with an increase of approximately 20 million compared to last year, hence confirming the Group’s commitment to strengthening its industrial platform, which is important for improving production efficiency and time-to-market.