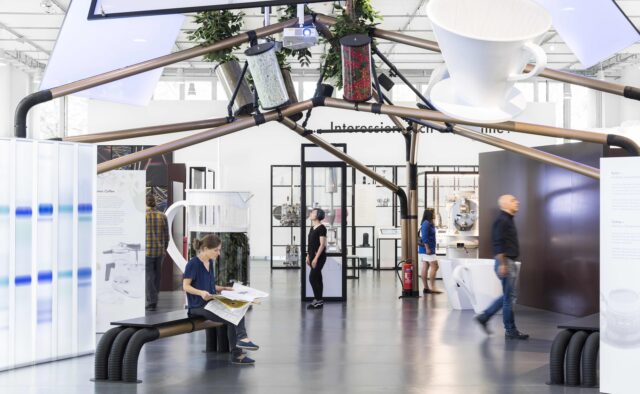 MUNICH, Germany – Cosmos Coffee, a stimulating new exhibition on Germany’s favourite drink – coffee – can now be found in the Deutsches Museum. With the help of 198 individual exhibits, 22 media, film audio and active-play stations, as well as 16 interactive installations covering an area of 800 square metres, you can learn everything about biology, chemistry, technology and economics as well as the cult and culture surrounding the bean.

The ‘Cosmos Coffee’ can be explored from the 4th of July with all the five human senses on Munich’s Museum Island.

“There is hardly any other foodstuff which stirs people’s emotions as much as coffee does. We have developed a special relationship with this drink all around the globe and we are not about to lose our enthusiasm for it. We are filled with a pleasant sense of security and well-being at the very thought of a cup of hot coffee,” says Wolfgang M. Heckl, General Director of the Deutsches Museum.

“This was also the starting point for the conceptual and creative design concept for the ‘Cosmos Coffee’ exhibition, which invites visitors to become enthralled by the uniqueness and sophistication of this beverage.”

One’s gaze wanders over green leaves, white flowers, red fruits. The scent of jasmine rises up and reaches your nose. The sounds of the jungle can be heard emanating from the small forest. And at the touch of a finger you can make a plant sprout – made possible with the help of augmented reality.

“Our coffee forest exemplifies the basic concept of the entire exhibition: we have created a sensory connection to technology in order to convey fascinating information on a more fun and playful basis,” explains Melanie Jahreis, one of the curators of ‘Cosmos Coffee.’

In addition to the coffee forest, both microscopic and macroscopic insights into plants can also be gained from within the biology exhibition area, while at the climate shelf display, the effects of global warming and the threat posed by diseases to cultivation are explained. In addition, the history of science is presented and the state of today’s research is discussed. 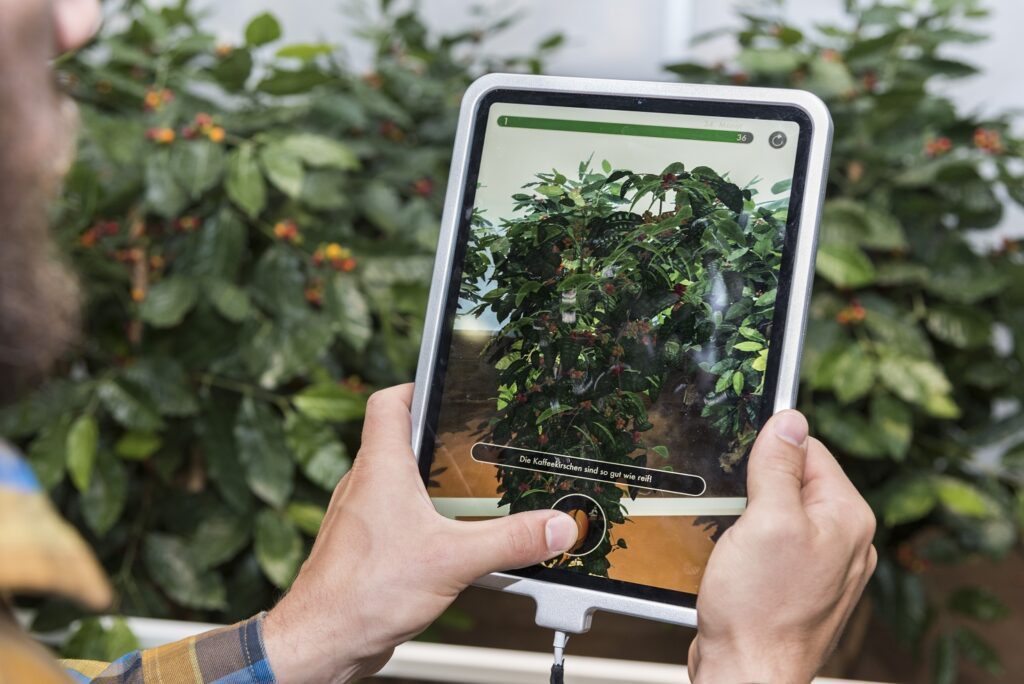 There are many more interactive exhibits included, such as the ‘coffee-growing game’ or the ‘sensory rush.’ “Here you can touch a cup and smell the roasted beans, hear how they are ground and brewed and feel the coffee vessel as it warms up,” says Sara Marquart, who is also a curator of the exhibition.

Both the aromas as well as the medical aspects of coffee can then be examined even more closely within the chemistry section. Whether it’s by ‘smelling through the mouth’ with straws – or sniffing from the drawers in the pharmacological shelf displays – you can learn more of the old myths about the harmful effects of coffee to one’s health (causes impotence) as well as the latest scientific findings (coffee drinkers live longer), gathered here together.

Roasting, grinding and brewing – the complete range of technology used by coffee lovers – are presented in another large exhibition area.

“There are 37 top-class exhibits within the the machine exhibits section – from Melitta Bentz’s first hand filter from 1908 along with models by Faema and Cimbali from different periods right up to the V12 engine block coffee machine,” Sara Marquart explaines. You can also admire both the world’s most expensive and rare espresso machine – the famous ‘La Cornuta’ on loan from MUMAC, Museo della macchina per caffè di Gruppo Cimbali – and the world’s oldest coffee maker, the first Moka Bialetti 1933 from the Collection Enrico Maltoni. 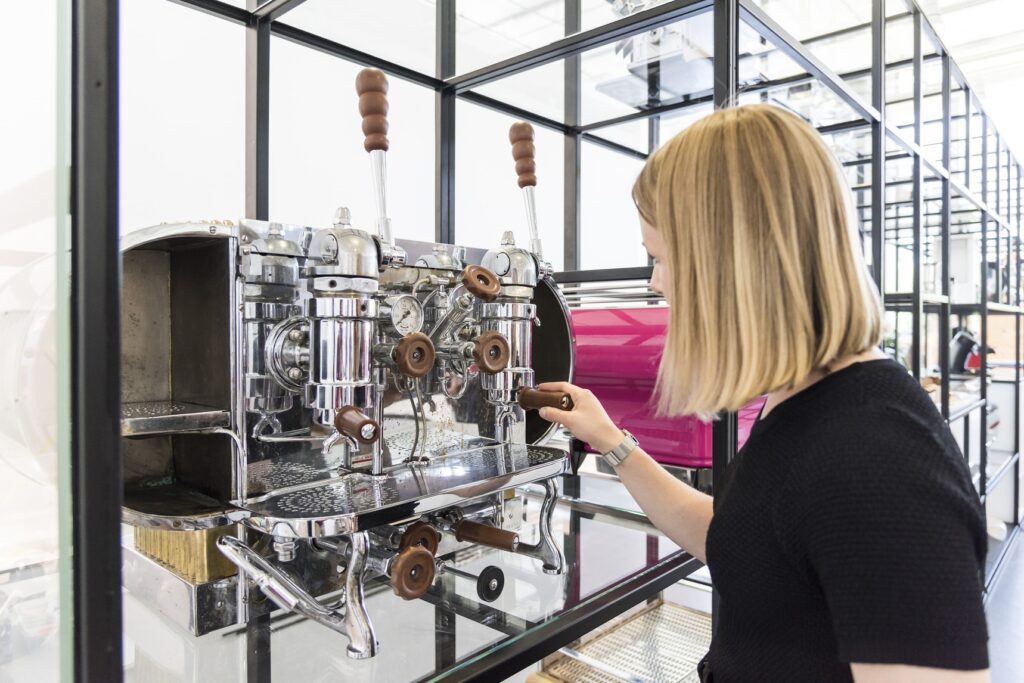 Elsewhere, it is possible to gain a good idea as to what level of grinding (fine or coarse) is suitable for which type of coffee preparation. But first the beans have to be roasted: “We have an early roasting pan, the first ball roaster and we even roast here daily on site as part of the guided tour.”

The next stage of the journey through the Cosmos Coffee takes you to the world of economics. On the one hand there are the producers – the coffee farmers located all around the equator – not to mention their working conditions. “We show how things have developed since colonial times with its slave labour, right up to the Fair Trade movement of today,” says Melanie Jahreis.

On the other hand, it’s also about trade and the end consumer of the coffee who live mainly in the northern hemisphere. Here you can find an explanation of those factors which the price of coffee is dependent upon. There is a stock exchange board along with an interactive game activity where you can have a go at trading coffee yourself. How coffee changes from being just a commodity to becoming a scarce commodity – such as was the case with the supply crises after the war or in the former East Germany – are described. “Then there was a lot of promotion of coffee substitutes,” says Sara Marquart. “However, the original product was still in much greater demand.” The numerous advertising campaigns in the past would attest to this. 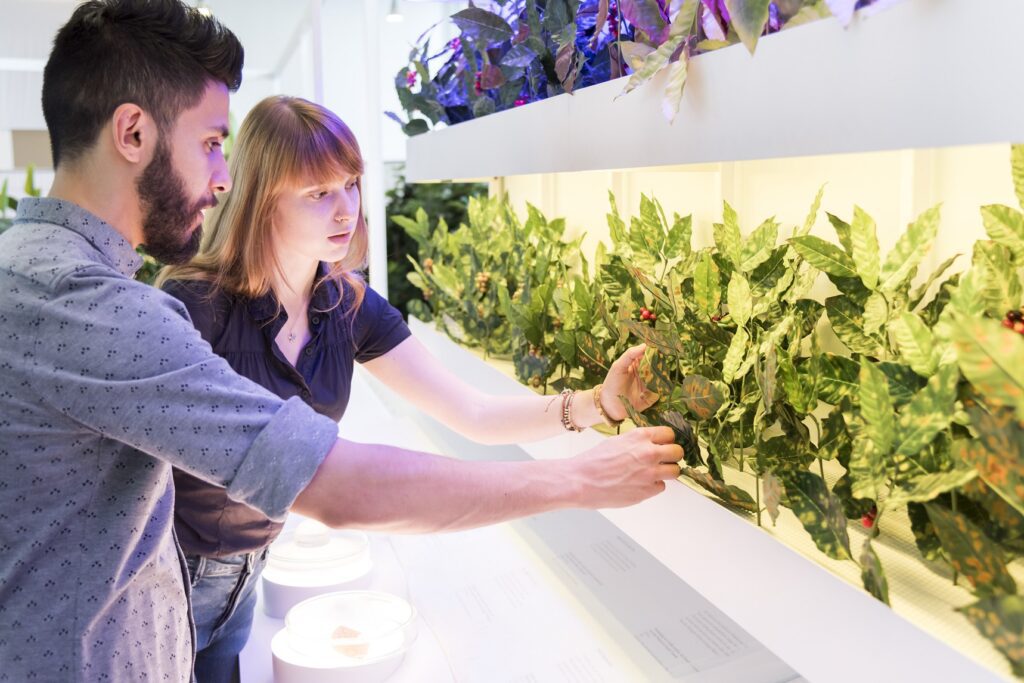 From the field of advertising the journey then runs smoothly towards the last large exhibition area and on to the theme of culture. On a large video screen one can follow the most diverse preparation and serving rituals from all over the world. The role of coffee is also discussed within the context of politics and society. There is a “drinking vessel shelf display” with 30 different vessels – from the moustache cup to the Lego cup. There is also the visitor cup, which is continuously being replaced over and over again. These are cups, that, along with their personal stories, we have received from our visitors and that we will hopefully continue to receive,” says Melanie Jahreis.

Biology, chemistry, technology, economy and culture – all explored in the “Cosmos Coffee”. After all that there is only one more thing missing: enjoyment! You can treat yourself to a cup before, during or after visiting the exhibition in the adjoining café. The Supremo team from Unterhaching will happily serve you an espresso, cappuccino, Americano, etc.

“The Deutsches Museum consciously wanted to break new ground and create a sensory exhibition. The museum remains true to its guiding principles by conveying the basic knowledge of the topic while at the same time being highly informative on both the latest technologies as well as the more complex scientific contexts relating to the cult drink. Just another example of how deeply science and technology affect society,” says Heckl. 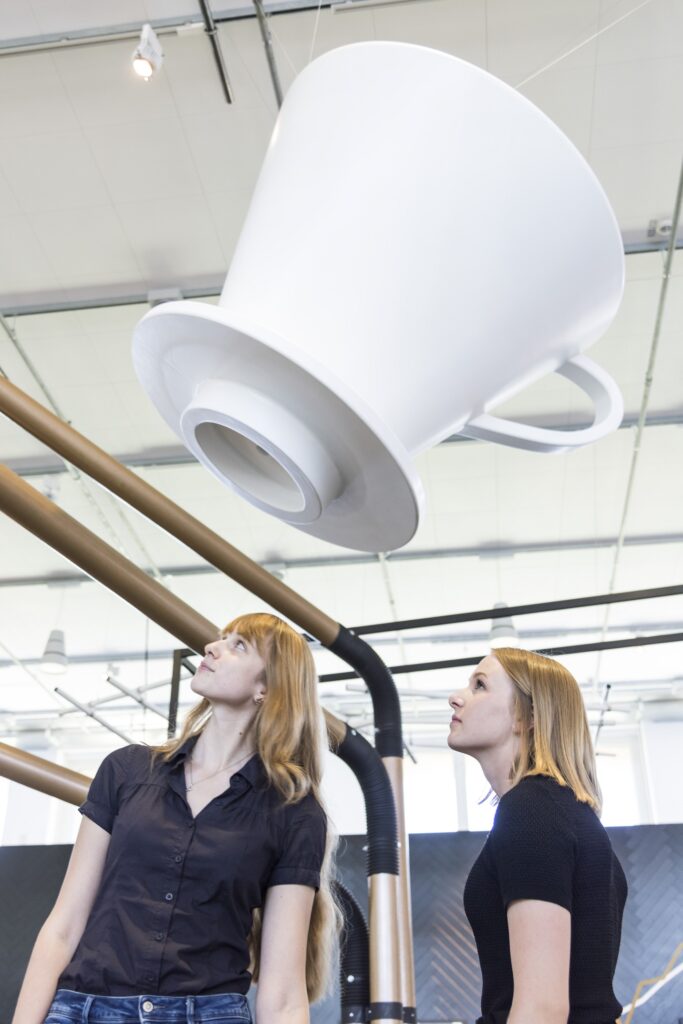 ‘Cosmos Coffee’ at a glance

Cimbali Group among the headliners of the Global Coffee Festival, live...

The inaugural Global Coffee Festival kicks off Friday, live on the web...