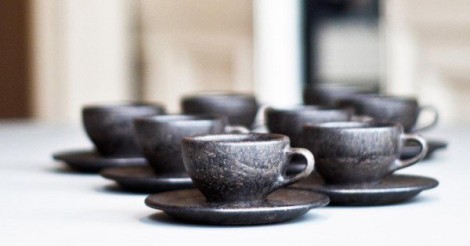 German company Kaffeeform combines dried coffee grounds and biopolymer to create stylish-looking coffee cups and saucers that are not only durable and dishwasher-safe, but even smell a bit like coffee. For every cup of coffee you brew, about two tablespoons of grounds wind up in the trash.

That doesn’t seem like a lot, but just think about the millions of coffees consumed around the world every single day, and you’ll start to see the problem.

Sure, some of those coffee grounds are recycled as fertilizer or beauty products like face masks, but most of it ends up at landfills.

It was while contemplating this issue that German designer product designer Julian Lechner came up with a radical new and sustainable way of recycling coffee grounds – turning them into tableware. Lechner first came up with the idea of using coffee grounds to create eco-friendly crockery while attending university in the Italian city of Bolzano.

“We were always drinking coffee at university,” he remembers. “Before classes, after classes, meeting friends, hanging out at espresso bars—all the time. And that’s how I started to wonder, What happens to all that coffee? It was all just getting thrown away.”

He began consulting with his professors about ways of using coffee grounds to create a solid material, but it took him years to actually come up with a viable solution. “We tried binding with a lot of different things,” Julian Lechner told VICE Munchies.

“We even tried sugar. That was close, but basically it was a candy cup. It just kept dissolving after being used three times.” The whole point was to make the material durable, so it was back to the drawing board for him and his partners at a German research institute.

Finally, after many failed experiments, long nights and liters of coffee, they came up with a mix of coffee grounds wood grains and a biopolymer of cellulose, lignin, and natural resins that seemed to behave the way Julian had envisioned it when he first embarked on his quest.

“The moment of knowing the cup would actually stand was super-exciting,” he recalls. “After such a long time, you have to really believe in an idea and that it can eventually work. It was overwhelming to drink that first coffee out of the cup. It proved to be totally worth the wait.”

And the fact that his creation has proven commercially successful is just the icing on the cake. Kaffeeform coffee cups and saucers are now present in ten shops across Europe, and the company can hardly keep up with demand, regularly selling out of its stock online.

And they’ve only been in business for a year. “It basically all happened through word of mouth,” Lechner says about the success of his company.

“It’s amazing to think of some of the places where orders have come from. A lot of individuals, but also a café in Saudi Arabia, Ritz Carlton Toronto, and the Nobel Peace Prize in Oslo to sell in their museum [gift shop].”

To make the recycled crockery, Kaffeeform picks up coffee grounds from three roasters in Berlin and delivers them to the headquarters of Mosaik, an organization that pairs small businesses with physically and mentally disabled workers. Here the grounds are …