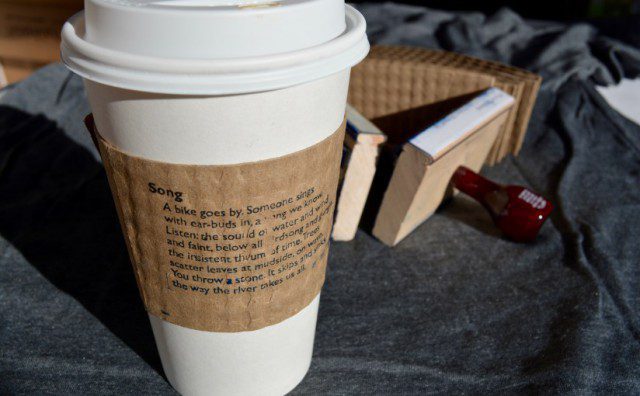 COLUMBIA SC, U.S. –  The City of Columbia Poet Laureate Ed Madden is pleased to announce a new project in conjunction with National Poetry Month. Poems from eight Columbia-based poets about the rivers have been stamped on coffee sleeves to be distributed at area coffee shops, Drip (locations on Main and in Five Points) and Wired Goat (locations in The Vista and Chapin).

“As a project for the poet laureate, last year and this year both, we put poems on the buses. We had already decided the theme this year would be the river, because it is the theme for Indie Grits, but I think the flood added additional urgency to the theme,” says Madden. Along with the bus project, the second project this year was to put the poems on coffee sleeves.

“We’ve been trying to think of ways to promote poetry in unexpected places, so coffee sleeves felt like a really obvious place to put poetry,” says Madden. “You can drink your morning cup and read a poem about where you live.”

April is National Poetry Month and over the past 20 years has become “the largest literary celebration in the world with schools, publishers, libraries, booksellers, and poets celebrating poetry’s vital place in our culture.”

The owner of Drip, Sean McCrossin explains why they participated, saying “I feel that one of the roles of a coffee shop is to offer a platform from which people can express themselves.

That is why I was very excited when Lee from one Columbia asked us to be part of this project!

Everyone in Columbia was effected by the flood (or knows someone that was) and to read what some of our great South Carolina poets had to write about it and have a good cup of coffee hopefully reminds us that art can express things that we sometimes are unable to express ourselves.”

Wired Goat owner, Jessamine Stone agreed to participate for a similar reason, saying “We got involved in the project to connect with our community and to raise awareness about the fantastic literary talent we have right here in South Carolina.”

The poets have come together to stamp the poems on over 10,000 coffee sleeves and the project will run through the full month at four different coffee shop locations.