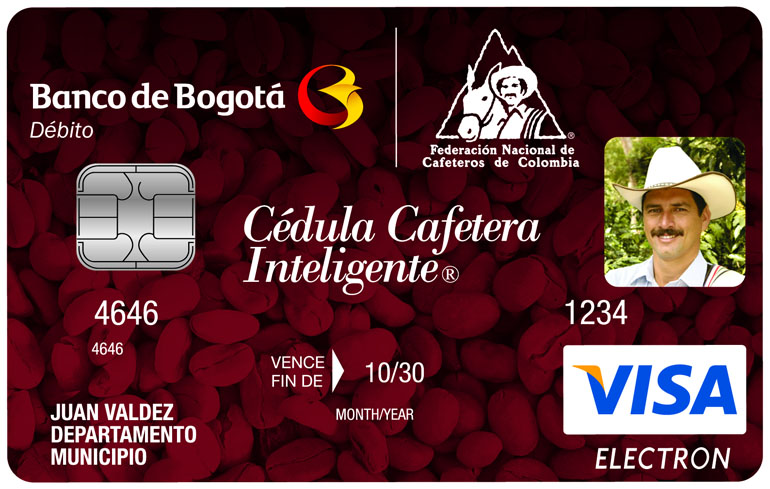 Life is a lot more convenient these days for fabled Colombian coffee farmer Juan Valdez and his real-life compañeros. Their wallets are going digital, speeding up payments for their crops, easing access to government benefits and providing timely information they can use in the field.

Between 2007 and 2014, 5.4 million payments were made through the Smart Coffee ID Card, totaling nearly $750 million, and the FNC says it expects to save $239 million in financial services in the next decade.

“While the Smart Coffee ID Card was originally intended as a safe, simple method to pay farmers for their coffee harvests, it quickly became an efficient and transparent channel for distribution of incentives, government subsidies, credits and resources to implement programs, increasing efficiency and effectiveness,” said Juan Camilo Becerra, FNC chief financial officer.

The initiative is among many global success stories cited by the Better Than Cash Alliance, a U.N.-based coalition that nudges developing nations to transition from cash to digital financial services as a way to help combat extreme poverty.

“There is growing evidence that digitizing payments—whether for health, education or other social safety nets—has important benefits for individuals, in addition to improving efficiency for governments and aid agencies by reducing transaction costs and leakage,” according to Camilo Tellez-Merchan, knowledge and research manager for the Better Than Cash Alliance. The alliance cited several examples:

In Colombia, several factors motivated the FNC to go digital for payments. For starters, transporting cash, especially in remote farming areas, was risky because of increased crime due to political turmoil, which has since been settled.

Payment by check was safer, but the farmer often had to pay a fee to cash it. In addition, numerous rural banks had closed because of a financial crisis in the late 1990s, according to a Better Than Cash Alliance case study.

Leveraging the membership cards that farmers already had, the FNC started its move to electronic payments in 2005 but faced an immediate challenge: There was limited or no access to financial institutions in 380 of the 592 target municipal areas, according to the case study.

“The Smart Coffee ID Card, in its first formats, involved a cultural change in the rural sector, where cash is, for many people, still the preferred payment method,” Becerra noted.

To make the card more appealing, the Bank of Bogotá, the Growers’ banking partner, proposed a personalized prepaid card, which continued to serve as a grower’s official ID and FNC membership card but with the additions of a magnetic strip and a chip.

However, chip technology was new to Colombia and the card had limited space for services and information.

“To meet the need, the bank designed ‘virtual pockets,’ ring-fenced amounts held by the bank that coffee growers could claim and use for specific purposes, such as purchasing fertilizer or fungicide, according to the subsidies for which each grower qualified,” the case study said.

“Although the chip did not hold the information, the card was required to claim the subsidies in the ‘pockets.'”

Lacking typical card-swipe devices, most rural merchants simply used their cell phones for the transaction, entering a code from the card and allowing the farmer to pick up his products.

While grower reaction was lukewarm after the first cards were issued in 2007, interest surged in 2009 when the Colombian government, through the FNC, started distributing electronic subsidies and credits to the growers because of bad weather and an international price drop.

Despite the safety and convenience of the digital wallet, the FNC still struggled to persuade farmers to use their card for anything more than withdrawals and accessing government benefits.

In 2013, for example, 84 percent of the transaction value was to cash out, compared to 9 percent for purchases.

So in 2014 the FNC started distributing the newly retooled Smart Coffee ID Card — now associated with a savings account and other enhancements — and embarked on a massive public relations push.

The Growers Federation dispatched teams into 377 coffee-growing municipalities to promote and replace the card, conduct workshops and organize special events.

“Without the Smart Coffee ID Card, the FNC initiatives to combat climate change, such as encouraging growers to plant more productive, rust-resistant coffee varieties as part of ambitious renovation programs to improve yields, would have been impossible to develop.”