LONDON – The ICO composite indicator rallied briefly to above 135 US cents/lb but quickly fell back to the level of June. This comes as cumulative exports in the current coffee year remain at very high levels, up 5.9% year on year, leading to higher inventories in importing countries.

Coffee prices in August initially continued the upward trend of the previous month. The ICO composite indicator price climbed to 135.23 US cents/lb on 8 August, a four‐month high.

Subsequently, coffee prices weakened significantly with the daily price falling to 122.59 US cents/lb on 24 August.

The group indicators showed opposite trends in August. While fluctuating extensively, all three Arabica groups registered increases as the average prices for Colombian Milds, Other Milds and Brazilian Naturals were up 1.7%, 0.1% and 2.1%, respectively.

Conversely, Robusta showed less variation but instead followed a steady downward trend. As a result, the monthly average for the Robusta group was 1.9% lower than in July.

The average arbitrage in August, as measured on the New York and London futures markets, increased further by 8.9% to 43.22 US cents/lb.

Export activity in July remained at a very high level. Shipments amounted to 9.4 million bags, 11% more than in July 2016.

During the first ten months of coffee year 2016/17, total exports surpassed the 100 million bag mark and were 5.7 million bags higher than last year when 96.3 million bags were shipped.

A detailed examination of the export data for major producing countries, however, shows a heterogeneous picture. 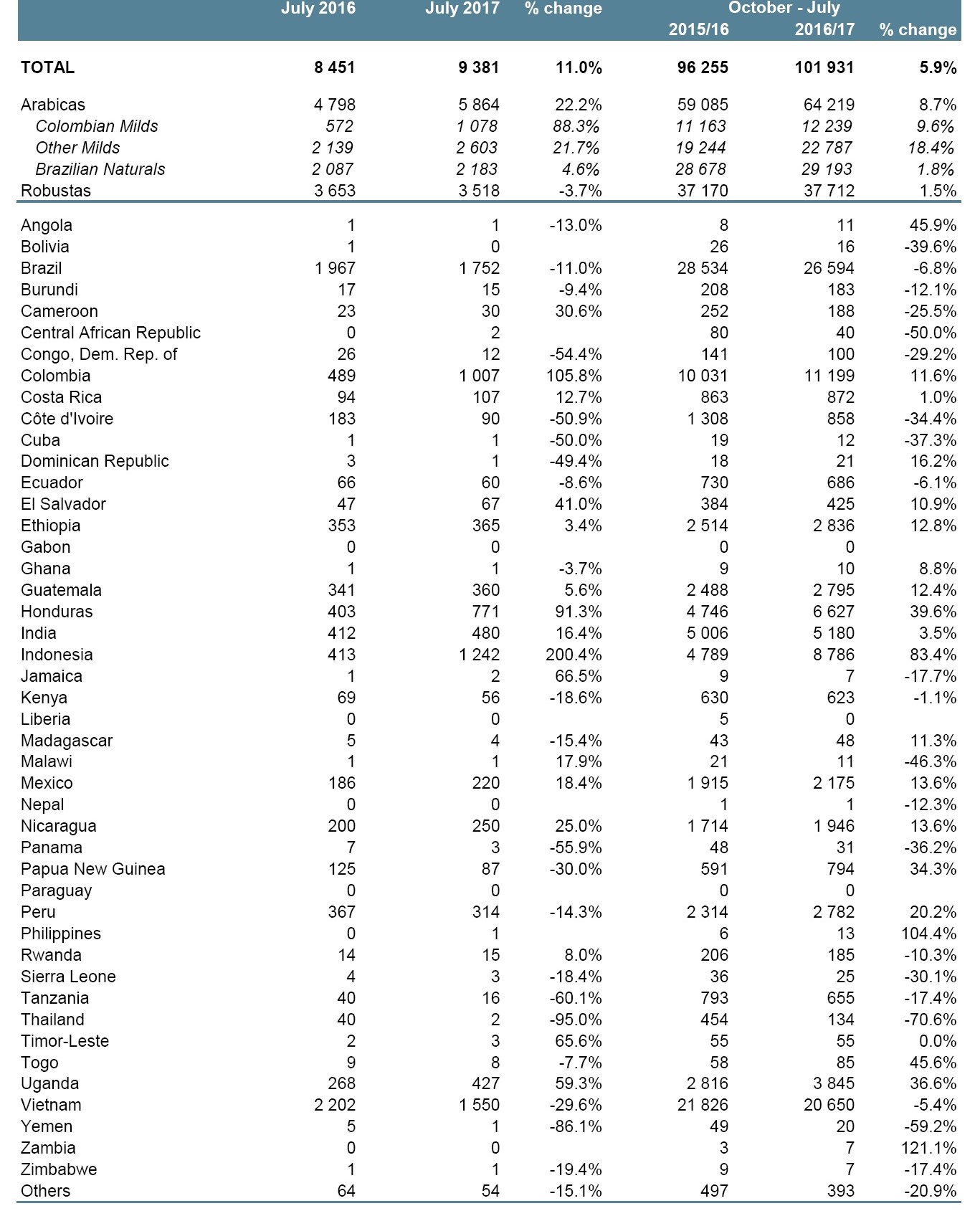 In Brazil, exports in the month of July were 11% lower compared to last year. In total, Brazil exported 1.75 million bags, of which 1.5 million bags were green coffee. Arabica coffee comprised 98.9% of all green coffee shipments.

This is the lowest level of exports recorded since February 2004 and results from a combination of the previously poor harvest and an unfavourable USD exchange rate eroding the competitiveness of Brazilian coffee on the world market.

In Vietnam, the second largest producer, shipments in July were estimated to have reached 1.55 million bags, 29.6% lower than the previous year. Cumulative exports for the first 10 months of coffee year 2016/17, however, were only 5.4% lower compared to last year.

In Colombia on the other hand, significant increases in exports were recorded. Volumes shipped during the month of July have doubled compared to last year. However, it should be noted that 12 months ago, Colombia’s trade was disrupted by a truckers’ strike, leading to unexpectedly low exports.

Nevertheless, the recent figures represent a continuation of this coffee year’s strong export performance as Colombia’s shipments amounted to 11.2 million bags since October 2016, up 11.6% compared to the same period during the previous coffee year.

Lastly, monthly exports from Indonesia are reported to have increased from just over 400,000 bags to more than 1,240,000 bags.

The increase is mainly due to higher green Robusta shipments (+115.1%) and also to higher exports of Arabica (43.6%).

Cumulative exports for the period October 2016 to July 2017 amounted to 6.5 million bags, up by 38% compared to the previous year.

Looking ahead, while the harvest of the Brazilian 2017/18 crop is almost complete amid concerns about relatively small bean size, prospects for the upcoming Vietnamese crop seem positive.

Meanwhile, weather conditions in Brazil have been favourable with no incidences of frost and sufficient rainfall leading to ample flowering with a – at this stage – positive outlook for the 2018/19 crop.