Coffee is the most traded and most valuable commodity at Ecx 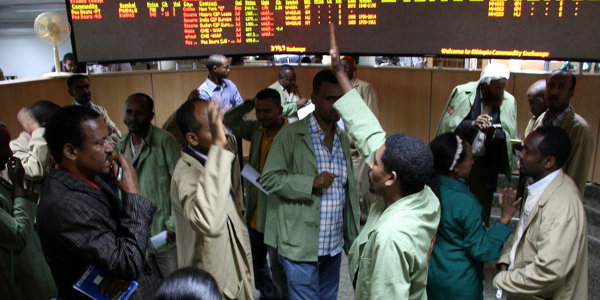 During the month, export coffee trade dominated the market by controlling market attention with 76% of the volume and the value and followed by Local and Specialty coffees in row. 15,967 tons of Unwashed Export coffee had been transacted for ETB 1.18 Billion. Unwashed origins, Gimbi shined with 24 % of the volume of the category followed by Illuababora with 19 % market share.

In line with this, 380 tons of washed Export coffee had been cleared with ETB 29.97 Million. Sidama shined forwarding 24% of the volume of the category followed by Limmu and Yirgachefe with a market share of 22% & and 19% respectively.

Moreover, 3,875 tons of local coffee was traded for ETB 268.52 Million. For local use coffee market; local unwashed took the leading in volume by 64% and that of local washed coffee has a market share of 36. %.

During the same month 7,111 tons of Soya Bean has traded in ECX marketing platform with a value of ETB 111.29 Million. Soya Bean Gojjam type has taken a lion’s share of 68% and 68% in trade volume and value respectively.

A total of 5,083 tons of Green Mung Bean has also traded with a value of ETB 157.54 Million. When a comparison made with the month of August, it has increased by 160% and 170% in terms of trade volume and value respectively and the average price has increased by 5% from the previous month.

In the month, a total of 3,994 tons of sesame had been traded for ETB 223.25 Million at Ecx. Humera/ Gonder sesame took higher share of the market by scoring 66 % and 72% in terms of volume and value respectively. In comparison made with the same month of the previous year the volume and value sesame trade has increased by 94% and 141% respectively.

The average price has also increased by 19% from the same month of previous year. In addition, a total of 858 tons white pea bean had been transacted for ETB 20.57 Million.