SÃO LOURENÇO, Brazil – A small Brazilian city, once famous for its mineral water springs, is now welcoming tourists with new attractions – a specialty coffee with unique taste and quality.

Besides enjoying the natural beauty of São Lourenço, a city located in Brazil’s southeastern state of Minas Gerais, tourists from around the world are also flocking to a coffee shop at the city center to take a sip of the local coffee, which has a history of over 100 years.

The coffee sold in Junior’s shop was grown at a farm located in the mountainous region of southern Minas Gerais, the soil and climatic conditions of which are favorable to coffee growth.

Meanwhile, São Lourenço is famous throughout Brazil for its natural spring water (in the PICTURE, a view of the Water Park), which also helps to explain why the region produces much of the best coffee in the country.

“The coffee here has acidity and sweetness, and does not need sugar,” said Helcio Junior, director and the fourth generation coffee farmer running the coffee shop Unique Cafes.

The good quality of local coffee has greatly boosted the development of tourism in the region, said Junior, who dedicated himself after graduating from university to transforming his family business from a coffee bean exporter to a specialty coffee producer.

In 2005, a coffee sample from the farm won the first place in the “Cup of Excellence,” an annual competition held in several countries to identify the highest quality coffee produced, with a world record of 95.85 points on a scale of 0 to 100.

Brazil is the world’s largest producer and exporter of coffee. Coffee plantations are mainly located in the southeastern states of Minas Gerais, Sao Paulo and Parana.

According to the Brazilian Association for the Coffee Industry, every single major coffee brand uses Brazilian coffee in its blend.

However, Brazil has, for decades, oriented its export of coffee as a commodity instead of a specialty product, therefore it has lost the marketing game when it comes to promoting its own brand.

“I started to roast our own coffee in 2005, when I entered our family business,” Junior said.

“Before that, our company had only planted and produced green coffee beans, and starting to roast coffee means that our own coffee product enters the domestic market,” Junior said.

According to Junior, his family has been exporting coffee beans to Japan, Norway, Finland, Denmark, Canada, Australia and the United States.

“We have entered the Chinese market in recent four to five years, and we have opened a coffee shop in Shanghai,” he said.

Junior believes that his specialty coffee has a promising prospect in the Chinese market. 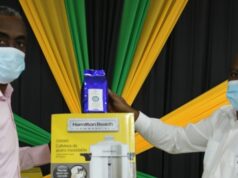